An update on the Bush Administration and the Politics of Fear

When I am right, I am right! I said in my August 11 piece, that you should take these new claims of terrorist plots with a grain of salt. Since then my premise has been confirmed. Here’s some new examples.

There was a recent piece by MSNBC‘s Keith Olbermann on his Countdown show, which covered the history of using Terrorism and Terrorists by politicians especially Republican ones for Political Gain. It’s very damning and you should really go watch it, it’s also available on Crooks and Liars where I first learned about the piece! Then come back here, and read the rest of this article!

We have all heard of the recent arrest of three men of middle eastern descent who were caught with over 1,000 prepaid cellphones.

There were a thousand cell phones that were inside one motor vehicle. a laptop computer, a camera. When you toss three brown skinned men into the mix, yep must be Terrorism.

“We didn’t know exactly what was going on. You hear on the news about these phones being used to detonate IED’s.” – Michigan State Police Trooper Patrick Sharkey

We then heard this ominous statement

Tuscola County Prosecutor Mark E. Reene said Monday that representatives of his office and Caro police had met with Sunday with officials from the FBI, the Department of Homeland Security and the U.S. attorney’s office. He said all the agencies were working together on the investigation. He thinks the men had a complex plan to attack the Mackinac Bridge. 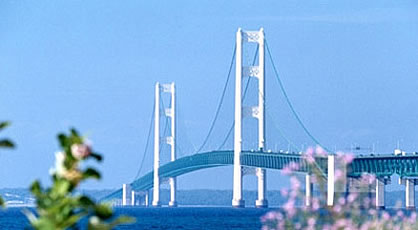 Prosecutors charged the men with collecting or providing materials for terrorist acts and surveillance of a vulnerable target for terrorist purposes.

The three Dallas-area men arrested in Michigan on state terrorism charges are well-known to cell phone wholesale and retail shops in Texas where they live. They were a part of a brisk trade that exists in buying phones from Wal-Mart and other discount stores and reselling them to smaller shops.

The FBI has issued their own statement on this situation:

They had no information to indicate that the three Texas men arrested with about 1,000 cell phones in their van had any connections to a known terrorist group. There is no imminent threat to the bridge linking Michigan’s upper and lower peninsulas.

We can at least hope that the charges against these men are promptly dropped and that they receive an apology from the Michigan prosecutors and from every single news organization which trumpeted these slanderous charges. I wouldn’t hold my breath if I was one of the three men. Even if they do apologize, I seriously doubt that this is reported as widely or as loudly as the initial news releases on this matter were.

On to plot to blow up U.S. bound flights with gel explosives

British officials knowledgeable about the case said British police were planning to continue to run surveillance for at least another week to try to obtain more evidence, while American officials pressured them to arrest the suspects sooner. The officials spoke on condition of anonymity due to the sensitivity of the case. –NBC News

A news organization quoted a top aid to President Bush as denying the account of the British officials while another U.S. official admitted it was in fact true.

I would bet real money that the top aid to President Bush is in fact the same man coordinating this Republican campaign of fear, Karl Rove or one of his Deputies. We all know his penchant for being an anonymous source in support of the Administrations policies, just ask Ambassador Joe Wilson and his wife Valerie Plame, the formerly clandestine CIA agent.

The plot was serious and dangerous to flyer’s according to the TSA and Bush Administration:

For that reason, the United States Government has raised the nation’s threat level to Severe, or Red, for commercial flights originating in the United Kingdom bound for the United States. This adjustment reflects the Critical, or highest, alert level that has been implemented in the United Kingdom. To defend further against any remaining threat from this plot, we will also raise the threat level to High, or Orange, for all commercial aviation operating in or destined for the United States. Consistent with these higher threat levels, the Transportation Security Administration is coordinating with federal partners, airport authorities and commercial airlines on expanding the intensity of existing security requirements. Due to the nature of the threat revealed by this investigation, we are prohibiting any liquids, including beverages, hair gels, and lotions from being carried on the airplane. This determination will be constantly evaluated and updated when circumstances warrant. These changes will take effect at 4:00 AM local time across the country. Travelers should also anticipate additional security measures within the airport and at screening checkpoints. – TSA press release

But in fact a senior British official hinted that an attack was not imminent, saying that the suspects had not purchased any airline tickets, some did not even have passports. Another little tidbit they left out was that some of these “plotters” were known to the British security services even before the London subway bombings which occurred last year.

In short this plot had absolutely no chance of success and wasn’t a real threat, and the Bush Administration knew that when they raised the terror alert levels and instigated a renewal of the publics fear in order to influence the political landscape.

A TSA supervisor and trainer was quoted in the opinion section of The Leaf Chronicle today as stating the following facts about the agency.

He dismissed shoulder-fired missiles totally saying only that the TSA has no defense against these.

In the end he concluded with:

My point? Simple. TSA knows terrorists think outside the box, yet the TSA refuses to attempt to out think the bad guys, preferring to wait until something happens before they act. Multiple threats are still out there, still viable, and will likely not be fixed until a bunch of people die. – Sam Smith, The Leaf Chronicle Letters to the Editor

As for having to remove your shoes and have them x-rayed, In a April 2005 report entitled: “Systems Engineering Study of Civil Aviation Security — Phase I,” the Homeland Security Department concluded that images on X-ray machines don’t provide the information necessary to detect explosives. They are now trying to claim otherwise.

In the end removing your shoes and having them x-rayed is all a dog and pony show to make the public feel safer about flying.

It’s time to fight back

My suggestion until they stop trying to manipulate your fears, do not fly. It’s not worth the hassle, and having to surrender your civil liberties. If enough people stop flying, the airlines will scream bloody murder, and then we will get some common sense in how airline security is handled in this country.

Politicians like to ask “Are you safer today than you were 5 years ago?” My answer is maybe not, but you are not any more at risk either.

In November, vote out of your hopes, not your fears, and by doing so show the Republicans that “We the People” will not allow them use our fears (Terrorism, Immigration, and Gay Marriage) as a tools to enable them to control us.

There is an old saying, “Fool me once, Shame on you. Fool me twice, shame on me. Don’t allow yourself to be fooled by George Bush and the Republicans again.