HomeArts/LeisureVideo: On the Spot dealing with uncomfortable situations
Arts/Leisure

Video: On the Spot dealing with uncomfortable situations 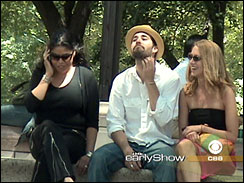 In a series of short video segments City News of Toronto takes a look at how people react to various social situations. Each one is it’s own commentary on how people think and react. These videos cover a variety of situations from race relations, rude behavior, and social strife in public. What would you do in each of these situations, and what kind of statement would that course of action or inaction make about you?

If you saw someone shoplifting what would you do?

What would you do if you saw someone blatantly littering?

What would you do if you saw someone sneezing up a storm or talking too loud on their cell phone?

What would you do if you saw a couple making love or fighting in public?

If you would like to see more of their work you can visit their website, City News Toronto.

You can also check out a similar September 2006 story and video by CBS News called America The Rude-iful.

With hidden cameras rolling, actors were very rude, to see what people nearby did.

The actors spoke way too loudly on cell phones, littered, and let “their” kids run wild in public.

You may be surprised how people reacted!

Self examination is always a good thing as it can help people on the path towards spiritual growth.