“Dissent is the highest form of Patriotism.”

“Courage is contagious. When a brave man takes a stand, the spines of others are often stiffened.” ~~ Billy Graham, Evangelist

Peace and anti-war activists gathered at Patriot’s Park on Fort Campbell Boulevard Sunday afternoon for a multi-faceted event honoring the fallen soldiers and voicing support for our troops and their families while decrying Bush administration policies regarding the Iraq War. 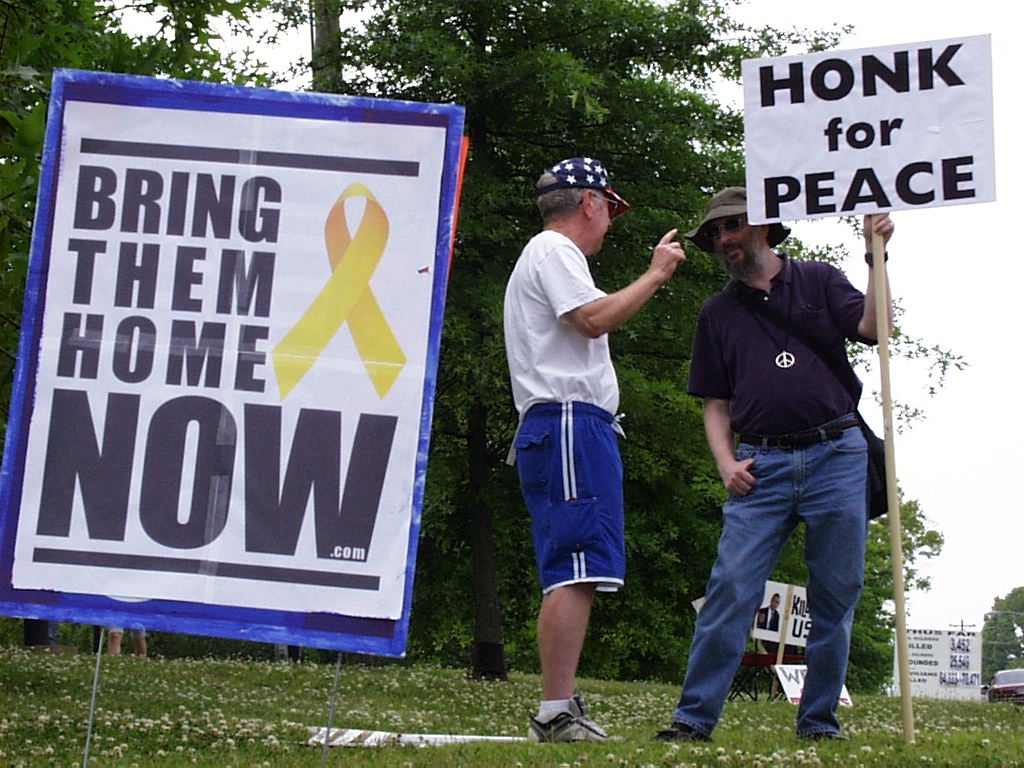 The peaceful Memorial Day weekend event was designed to acknowledge the growing numbers of American dead in Iraq (Sunday’s numbers for American dead in Iraq was 3,452), to say nothing of the devastating injuries (mental and physical) endured by our troops and the horrific number of civilian casualties among the Iraqi people. The statistics from the war were displayed on 4′ X 8′ signs on both sides of the park. The program acknowledged and honored those whose lives have been sacrificed to the country.

The program included an initial benediction by a local minister and readings from the book Peace Pilgrim and the Unitarian hymnal. A listing of the names of all Tennessee (74) and Kentucky (58) soldiers killed in Iraq, along with the names of non-resident soldiers stationed at Ft. Campbell at the time of their deaths overseas, was presented. The event closed with a circle of speakers and readings supporting peace and human rights.
During the afternoon, activists with colorful signs urged passers-by to “Honk for Peace” and support efforts to change the political mindset from escalation to resolution of the conflict and a return of our troops to American soil.

Sponsored by the Clarksville FreeThinkers for Peace and Civil Liberties, which has organized numerous protests, peace vigils and memorials across the city, Sunday’s action attracted supporters from around Tennessee: Veterans for Peace, Americaswas, peace and justice groups from Nashville, the NAACP, PFLAG, CODEPINK, local ministers, and several out-of-state soldiers opposing the war. Larson/ClarksvilleOnline co-sponsored this event.

Terry McMoore of the NAACP voiced quiet frustration with the inability of our political leaders to being an end to the Iraq War which was supposedly “won” nearly five years ago. Bill Larson of ClarksvilleOnline has lent invaluable support to peace and anti-war efforts in Clarksville via his alternative news website.

Therapist Polly Coe read from the book Peace Pilgrim, the story of an older woman walking cross country relentlessly until peace becomes the order of the day.and spoke quietly to the circled group and to individuals about the negative impact of war not just on soldiers but on our country.

“Wars are not acts of God. They are caused by man, by man-made institutions, by the way in which man has organized his society. What man has made, man can change.” ~~ Frederick Moore Vinson (1890-1953)

Though many quotes on patriotism and the peace movement use the word “man,” it must be noted that in these early years of the 21st century, women have developed a strong, vocal and visible presence in the current peace movement in America, not just in the voices of female leaders, but the voices of ordinary women living ordinary lives with extraordinary vigor. Many of these “women warriors for peace” were present on Sunday.

Debbie Boen, founder of the FreeThinkers, created the group in the post 2004 presidential election period out of frustration with Presidential policies and the escalation of the Iraq War. Working at time with a handful of activists, she has sustained the group and expanded it to its present network and level of activity, and is a driving force for peace. 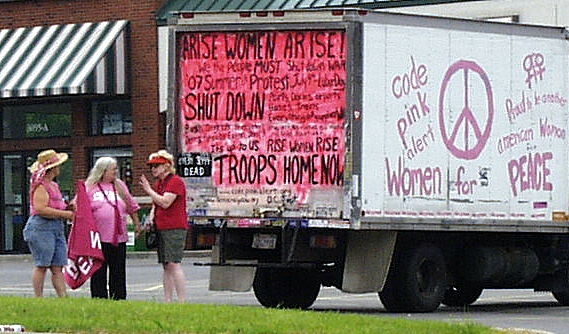 CODEPINK, traveling from Atlanta to Chicago, made a detour through Clarksville Sunday for the peace action at Patriot’s Park. Bill Larson Photo.

CODEPINK (Women for Peace) made a detour on their journey from Atlanta to Chicago to stand with the Clarksville group. CODEPINK activists are traveling across the USA promoting a “Summer of Protest,” urging Americans to sponsor and support actions to end the war in Iraq. CODEPINK’s brightly painted truck with its many anti-war messages remained parked across the from the park, visible to oncoming traffic, through the afternoon event. Their large pink signs and flags were clearly visible from the park. 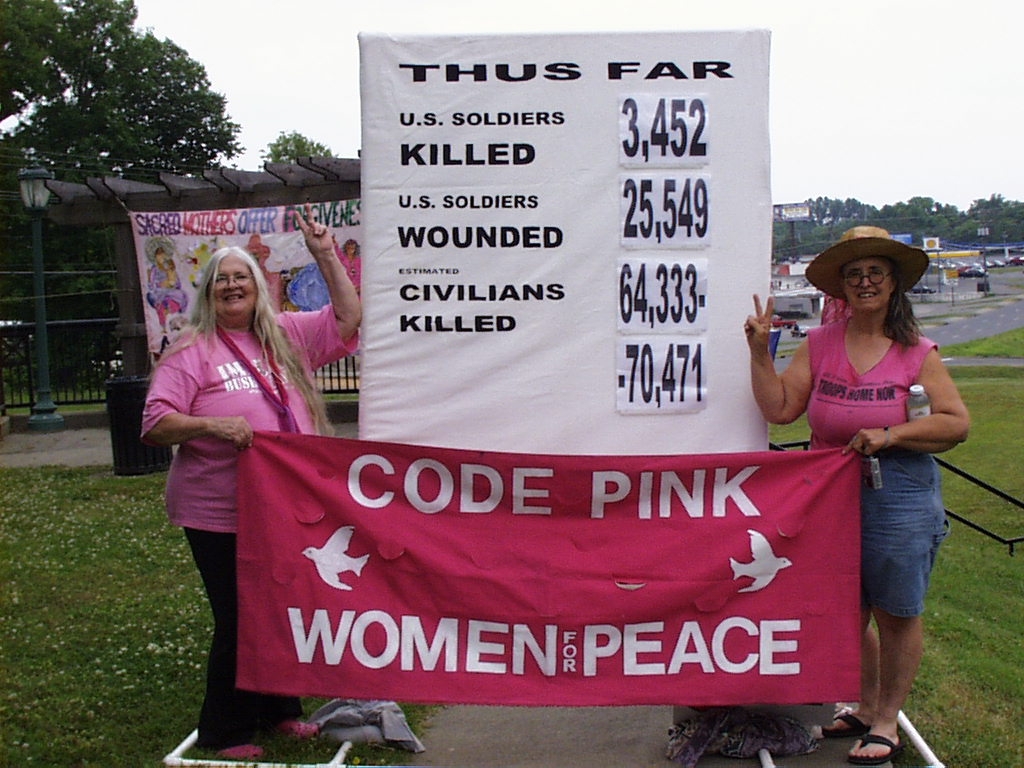 Elizabeth Barger (l) and Sam Joi or CODEPINK keep an eye on the grim statistics while holding up their own sign for peace. Bill Larson Photo

Sam Joi, driver of the CODEPINK truck, encouraged Americans to take a simple action for peace every day from July 4 through Labor Day, “something as simple as standing outside with a candle or a sign everyday through the summer.” Joi wants to see a recreation of the Summer of Peace made famous during the Vietnam era. Her suggestions included having all the churches in town ring their bells at 7 a.m. and 7 p.m. every day until the war is over, “to remind us all that we are in a war, ” and to have all the companies with large American flags lower them to half-staff until the troops are all home and the conflict ended.Two out-of-state soldiers with Iraq service behind them stood with the group, retaining their anonymity while giving voice to their privately held belief that the Iraq War is the “wrong war to fight” and that “the sooner the conflict comes to an end the better.” 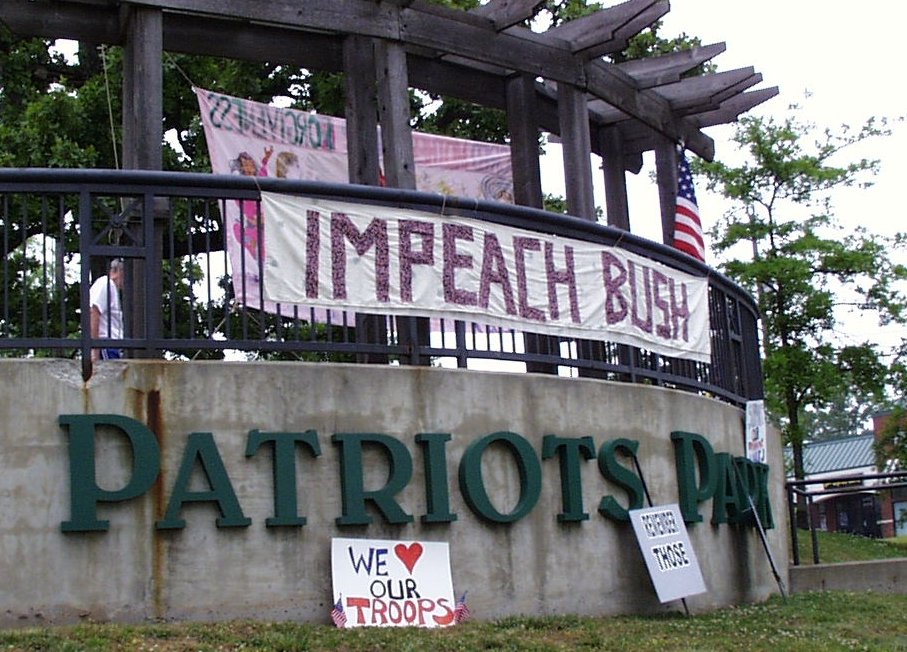 One soldier, an Iraq War vet, tore down an IMPEACH Bush sign hanging over the words Patriot’s Park, apparently unaware of our right to hold and present a dissenting viewpoint, apparently unaware of the turn against the war in public and global opinion, apparently unaware and unrespectful of our belief that the best way we can support troops (and their families) is to get them out of Iraq before they come home in a flag-draped body bag. FreeThinkers rehung the sign for the balance of the day.

While several people voiced opposition to our message, a stunning and overwhelming majority of passing cars and trucks honked for peace and gave the group thumbs up. 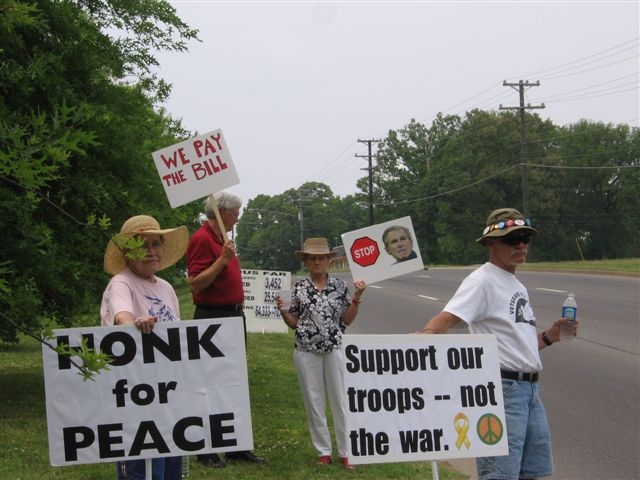 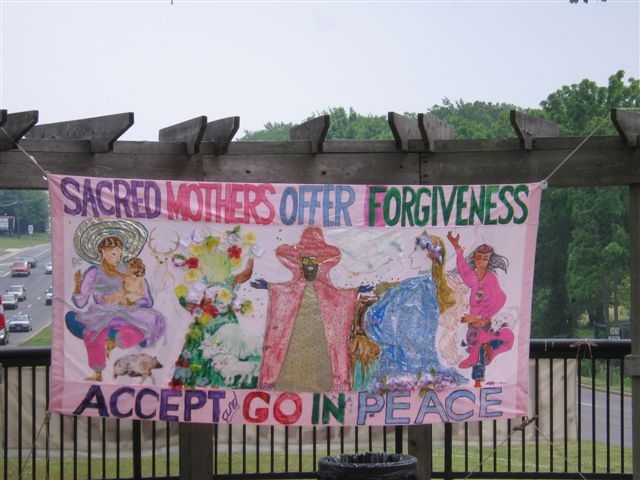 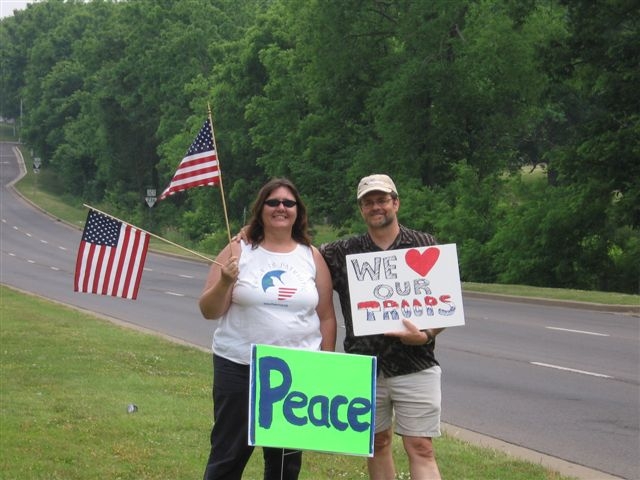 Note: I encourage you to check out the websites for Peace Pilgrim and CODEPINK.