The End of the World on Drive-In Saturday Night

The Apocalypse. Nuclear Holocaust. We cold-war babies grew up with the concept. In fourth grade it was “duck and cover” and survival skills that included wiping nuclear fallout off canned good before opening and consuming them. Right. Okay. Got it. Then there was the Bay of Pigs and the Cuban Missile Crisis, when teachers had us write our names in our clothes so that if we were nuked while walking home from school our bodies could be identified (we lived at the bottom of a hill, less than a mile from a strategic site). Yup. Got that too. 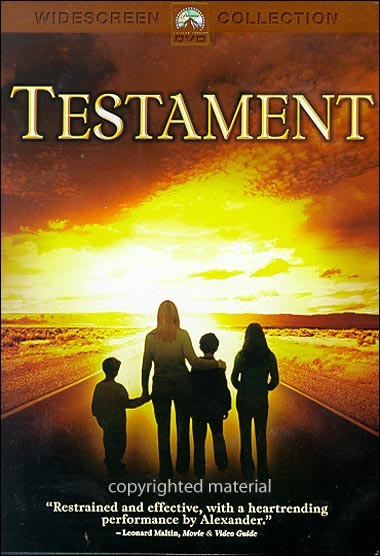 It all seems so silly now. But those times spawned a generation of classic films, some a lot better than others, but all eminently entertaining (and some still downright scary)!

At the top of my list is Testament. It didn’t get wide play, so I am continually surprised at how many people know this film.

Testament is understated. It doesn’t have the huge explosions, the mushroom clouds and the flattening of buildings. It’s much subtler. Ordinary people, ordinary families, going about their lives. It all changes in a flash. Literally. A quick burst of emergency warnings, a brilliant light, and the world changes forever.

The horror is in the innocence of the people, who wander out of their homes, into the invisible fallout and killing radiation, still blissfully unaware that they are dying. We watched, mesmerized as food supplies dwindle, as husbands, wives, mothers, fathers, babies and children begin to die. We watch a mother sew a shroud around a teenaged daughter, a father use a bureau drawer as a coffin for his infant, n old man stand watch at a ham radio, trying to reach anyone. Anywhere. The question of the day remains unanswered: Who started it?

Jane Alexander, William Devane and a very young Kevin Costner and Rebecca DeMornay star. This is one single best nuclear film to see, simply because of its humanity. (1983)

In the same year as Testament, we were also offered The Day After, featuring Jason Robards. It’s a graphic film that plays up the graphic reality of a nuke going off in middle America, in Lawrence, Kansas, to be specific. This film travels the path to destruction, an accounting of man’s failure to make peace. We watch as the innocents struggle to survive, even as they are withering and dying before us. It is blatant in juxtaposition to Testament‘s subtleties. This could be “Any Town USA.” (1983)

On the Beach: Gregory Peck stars in Stanley Kramer’s 1959 production of On the Beach. Peck is a sub commander searching in Australia for survivors of nuclear holocaust. He finds Aba Gardner, who quickly becomes the love interest. Fred Astaire and Anthony Perkins co star as characters awaiting the ravages of fallout spreading from the north. The war is over, and nobody won. Peck and Gardner grasp for a few of love as the human race self-destructs.

A Boy and His Dog: Harlan Ellison’s tale of the telepathic connection between a boy and his dog scrounging for food and sex. The boy finds both as they stumble into an underground society where citizens are unable to reproduce. They plan to use him, then kill him. Escape is mandatory, hurling the telepathic duo back into the landscape they fled. (1975)

Fail Safe is on of those quiet movies that meanders through Washington’s social landscape before hitting its national security systems. Where everything that can go wrong does. Walter Matthau heads up this cast with Henry Fonda as the President with who makes an impossible deal to avert nuclear war. The question: what happens when a routine flight goes wrong and the territorial Cold war boundaries are violated? What happens when you can’t call the bombers back? Fail safe takes that road to its troubling conclusion. (1964)

Dr. Strangelove: (with the caveat “How I learned to Stop Worrying and Love the Bomb”). Just about everyone has seen the image of Slim Pickens riding the nuke to oblivion. USAF General Jack Ripper goes mad, deploying bomber to wipe out the USSR. The Soviets says a nuclear hit will trigger a “doomsday” secnario. Peter Sellers has a triple role as the three men who might be able to stop the nightmare. We are presented with a drunken Nazi genius who admits the weapon is not “a practical deterrent.” Talk about understatement! (1964).

War Games: Teen hacker Matthew Broderick invades a military weapons system only to learn that “the only way to win is not to play.” (1983)

The War Game: A fictional worst-case depiction of nuclear war in England. Oscar-winner for Best Documentary despite the fact that it is fiction (intended as a one hour BBC production). Convincingly real. (1967)

When the Wind Blows: This 1986 film follows an elderly couple preparing for nuclear war using government issued pamphlets. They survive the blast, and wait for government help that will not come, unaware that even as they wait, they are dying.

By Dawn’s Early Light: Televised in 1990, this film follows the role of the SAC mobile command post. One of the better known quotes:

Fargo: “Hell, most Soviet bombers are so old they still use propellers. The Minnesota Air National Guard could probably knock them down.”

Harpoon: “Well, do you want to get on the phone and order them into the air, Colonel, because every transistor in Minnesota is BURNED OUT!”

Mad Max, The Road Warrior, and The Road Warrior: Beyond Thunderdome: Mel Gibson is proof of survival of the fittest (and the most violent) in post-apocalyptic Australia. These three tales are created in a new world where brutality rules, commodities are up for grabs, and nothing is sacred except vengeance and protecting what’s left of the innocent… (1979, 1981, 1985)

Miracle Mile: Anthony Edwards and Mare Winningham co-star in this version of apocalypse. It poses the question: What would you do with only 24 hours to live? The bomb will strike in 70 minutes, and the only way to buy time is to get out of LA. (1989)

Threads: Documentary style view of nuclear holocaust as it happens in Sheffield, England. It asks the question: “what are the long term effects of nuclear war on civilization?” (1984)

The Noah: What if you are the last one left? This is truth for Noah, who copes with his loneliness be creating an imaginary friend, then a friend for his friend, and finally an entirely new civilization that lives only in his mind. (1975)

2019: After the Fall of New York: Society responds to holocaust by forming two factions, the evil Euraks and the rebel Federation. The federations goal: to rescue the only fertile woman left on earth. (1984)

Drive-In Saturday is published every Friday through Labor Day to give you time to find your movies, stock up on popcorn and settle in for a night “B” movies with a few “A”s and plenty of “C”s and “D”s thrown in for good measure.