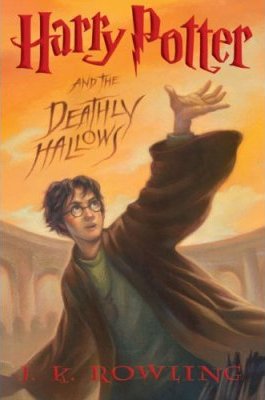 True to her word, J.K. Rowling brought the Harry Potter saga to an end with the seventh and final installment of the series, the 759 page Harry Potter and the Deathly Hallows, but not without its share of tragedy and triumph.

On the heels of the heart-wrenching death of the beloved Professor Dumbledore in Book 6 comes a series of often brutal skirmishes and long-awaited climatic battle between good and evil, between love and hate, between Harry and his nemesis, the evil Lord Voldmort.  It’s a sometimes dark and ominous book into which the beauty of love, the power of hope, and the nobility of honor emerge.

For the first time in the series, the primary settings are not the mystical Hogwarts castle and grounds; Harry, Hermoine and Ron are on the run, fleeing from dementors, death eaters and Voldemort himself, sheltering everywhere but at the once safe school of witchcraft and wizardry. With a handful of items — wands, the invisibility cloak, a few legacies from Dumbledore — the intrepid trio work from the shadows to unravel the mysteries of the horcruxes and a new mystery known as the deathly hallows. Skirmishes abound, with forays into the ethereal beauty of a wedding, the haunting sadness of Potter’s old home (now a commemorative site in the wizarding world), and a revisit to the Chamber of Secrets.

The Ministry of Magic and the Order of the Phoenix have fallen, and the reign of purebloods under Voldemort seems assured, just a matter of time and untimely death. The survivors of this classic escalating war are in hiding, working from a mystical underground where nothing is quite what it seems and where, one by one, the loose ends are about to be tied up and unanswered questions resolved. As promised, Rowling kills off a number of characters of greater and lesser import as, over the course of the first 600 pages, she leads readers into a a full blown war that brings most of the characters back to Hogwarts.

Characters introduced serially in earlier books resurface, and the mainstay characters — Hagrid, Neville, the Weasley clan, the Malfoys, Snape, McGonagall — emerge with new destinies. Rowling holds true to her pattern of spreading the glory to many characters; Potter is not the only hero in her books. Ron, Hermoine, Neville, Seamus, Dobby, Fred and George Weasley, even young Colin have their moments of glory. Each has a destiny that is fulfilled here. Past events are revisited from new perspectives,  perceptions and beliefs are challenged, sacrifices are made, and new understandings overlay old experiences.

When the first Potter book was published, I noted that Rowling took the time to honor not only the heroic actions but  the smaller bits and pieces of honor emerging from lesser characters, as when a very young Neville tried to protect Griffyndor from Harry’s escapades. “It takes courage to stand up to your enemies, and even more to stand up to your friends,” Dumbledore said of Neville. So it is that here in HP7 many of the Potter entourage are given bits and pieces of the action, each playing a part in this epic, each fulfilling a destiny that will make their collective future better.

In smaller seminal scenes we watch Harry respond to an insult to McGonagall and a threat to Draco Malfoy, and we have a moment of watching what happens when Mrs. Weasley vents her long-standing hatred against someone who would do her family harm (one doesn’t want to be on the other end of that rage). We watch as Harry uncovers the rest of the backstory in the triad of James, Lily and Snape. We stand in limbo as Dumbledore enters Harry’s mind (is it memory, place, spirit, dream?).

Each strand of this history is woven into a tapestry of the future. As Harry and Voldemort circle each other on the battlefield of Hogwart’s, we move toward the words of the prophecy that neither will live while the other survives.

As Harry unravels his destiny, he comes face to face with Voldemort, armed with the strength and wisdom born of loss and love that is rooted in his inherent nobility and honor.

I began reading the book at 12:10 Saturday morning, slept for a few hours, and finished the book at 2 p.m.   While I think some 100 pages could have been edited out without sacrificing the story. I found some of the language simplistic, yet the sheer imagination needed to create this alternate universe that is Harry Potter’s realm is phenomenal. Harry Potter and the Deathly Hallows is a heck of read — and to do it justice on film will take an epic length (4 hour) film. Rowling knows how to spin a tale, and how to bring it to a satisfying conclusion.