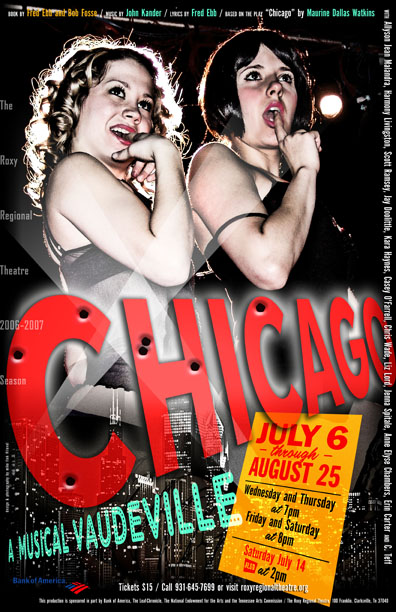 From the first shimmy of a garter and stocking-clad leg, the lingerie-laden Roxy production of Bob Fosse’s Chicago romps across the stage with vaudevillian style that both charms and delights.

The show opens with a disclaimer that “all costumes have accidentally landed in North Dakota,” which literally sets the stage for a classic Fosse opener: scantily clad dancers in bustiers, garters and sex appeal moving in the exotic angular motions that characterize Foss’s distinctive choreography. The opening number, All That Jazz, sets this vaudevillian stage for jazz singer Velma Kelly’s (Harmony Livingston) arrest for the murder of her husband and sister, and introduces the city’s aspiring showgirl and newest murderess, Roxie Hart (Allyson Jean Malandra), who just offed a lying lover.

Both women land on “murderers row” in Chicago’s Cook County Jail, in the care of Morton (Kara Haynes), prison matron whose hands are greased with payola. With the wheels of justice well lubed, we are gifted with lawyer Billy Flynn (Scott Ramsey), who job is to find a way, any way, to help his obviously guilty female clients get away with murder. He’s good at it.

Malandra bubbles her way through the performance, shaking her tousled curly red hair and other assets, flashing smiles and widening her eyes on cue in a mix of innocence and shrewdness, having mastered the exaggerated style of true vaudevillians. Livingston brings a sultry heat to her role as Velma, steaming up the stage with a every look from her darkly shadowed eyes and every stretch of her stocking-clad legs. Hayne’s first appearance is a burst of color against the otherwise stark blackness as she appears in a bold crimson gown for the When You’re Good To Mama number in act one, and she carried her beautiful voice through Class, a duet with Velma in Act II. Another duet, My Own Best Friend, sung by Malandra and Livington, is perfectly sung to close Act I.

Another show-stopper was We Both Reached, an ensemble number with Flynn, manipulating Roxie and feeding his version of the story to reporters that respond like puppets on a string.

Ramsey’s rendition of All I Care About has style and a bit of that Zigfield flair as the slick and sometimes lecherous lawyer is circled by gartered girls with burgundy feathered fans. Ramsey bringst just the right edge to the part: charm, a devilish smile and eyes that punctuate every line.

The height of hilarity, though, is the casting was Chicago reporter Mary Sunshine (C. Tefft), who emerges in a wide brimmed, flower decked hat, long coat with fox collar and cuffs, and a comic style that was the essence of vaudeville. Tefft was, in a word, terrific, as he sang A Little Bit Of Good in a female falsetto with a hint of tremulous vibratto. It is camped up, corny and absolutely wonderful.

Jay Doolittle plays Roxie’s husband, the older, worn-down Amos Hart, with pathos as he stays fairly loyal to his cheating, murdering wife through most of the story. His Mr. Cellophane number sets him up as the invisible man who is plodding through life, oblivious to its realities.

Chicago threads story within story, weaving them into a musical tapestry a step back in time to the mobster era in Chicago nightclubs, a time when “jazz and liquor” and the front page ruled and murder was almost entertainment. 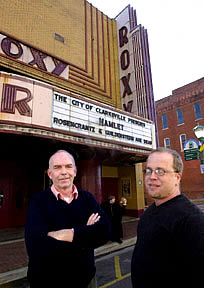 Tom Thayer directed the complex production, finding credible ways to integrate oversizing, overlapping actions on one small stage. Chicago mixes story with music, the drama zipping in and out of the ‘song and dance’ routines; it takes a fine hand to master the mix and Thayer makes it work.

Erin Carter (who doubles as choreographer and the character Mona) was up to the challenge of the articulated Fosse style, and moved her dancers in a mix of the structured style Fosse made famous and a bit of old-fashioned Charleston footwork to the mix.

If there is any criticism of the production, it is that some of the lyrics were difficult to hear over the power of the live orchestra. Since the volume of the orchestra was fine, powering up the mics on the singers may be the alternative.

Note: Chicago runs through August 25 at the Roxy Theater in Downtown Clarksville. Call 931-645-7699 for tickets and performances dates.