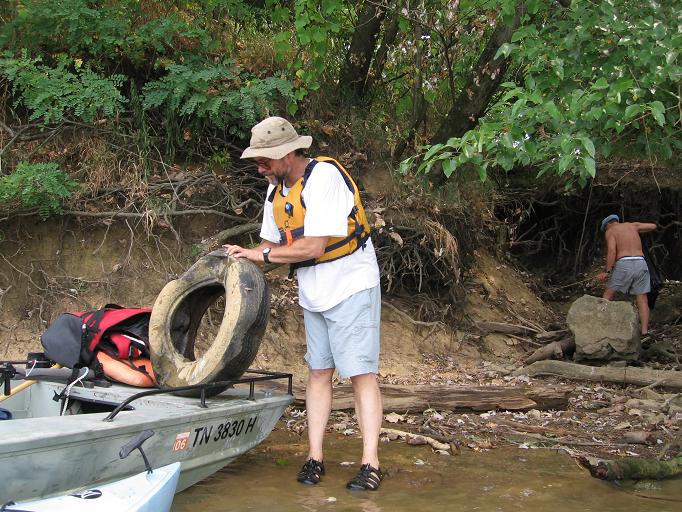 What do a shopping cart, two auto tires and a Leaf Chronicle newspaper box have in common? They were picked up today as litter along the shore of the Cumberland River in downtown Clarksville.

All that, along with chairs, buckets, plastic pipe and about 14 bags of trash, were pulled from the shoreline by a team of volunteers who call themselves the “muck pluckers,” a volunteer team that braved the high heat, humidity and poor air quality to clean one small part of the city.

“There was more trash than this out there,” says David Boen (pictured above) who led this expedition on boats from Fair Grounds to McGregor Park. “But the boats were piled high with trash, and we were getting exhausted, so we had to stop.” With frequent scrambling in and out of boats to pick up litter along the shoreline of the Cumberland, it took four hours for this dedicated group to bring home their catch. They worked from a long boat, three canoes and two kayaks.

Why did these people spend a hot Sunday afternoon in a crowded, noisy river full of racing boats just to pick up litter? David spoke of his love of nature when he delivered the homily at the Unitarian Universalist Fellowship Sunday morning. 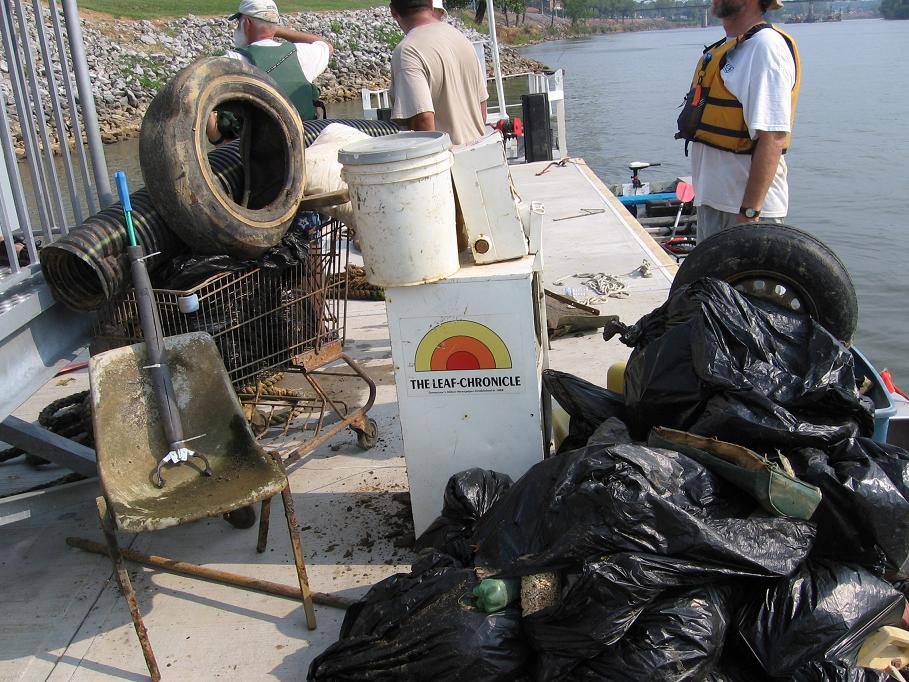 David grew up with a family tradition of always taking away more trash than what you brought in when camping or hiking. “It’s something that stuck with me all my life.” Rivers have a special place in his heart and in his serenity.

When asked, “How can you be so cheerful about picking up litter? It’s all so gross and overwhelming,” David admitted that picking up the litter is hard, but rewarding. Many civilizations have treated rivers as the way to wash away their filth, he said.

“It is difficult to convince people that their rivers are polluted by chemicals, sewers and cows that poop directly into the river, because you can’t see that stuff. But you can see the tires and litter. And you can pick it up, a little at a time. And someone else might decide it’s worthwhile and join in. You can’t change all of it, but you can change a little of it. And that’s something,” Boen said.

Editors Note: Kudos from Clarksville Online to these fiesty volunteers for the time, energy and dedication they invest in our city and its environment.