HomePoliticsSelf-expression or Suspension? It's all a matter of the color purple
Politics

Self-expression or Suspension? It’s all a matter of the color purple 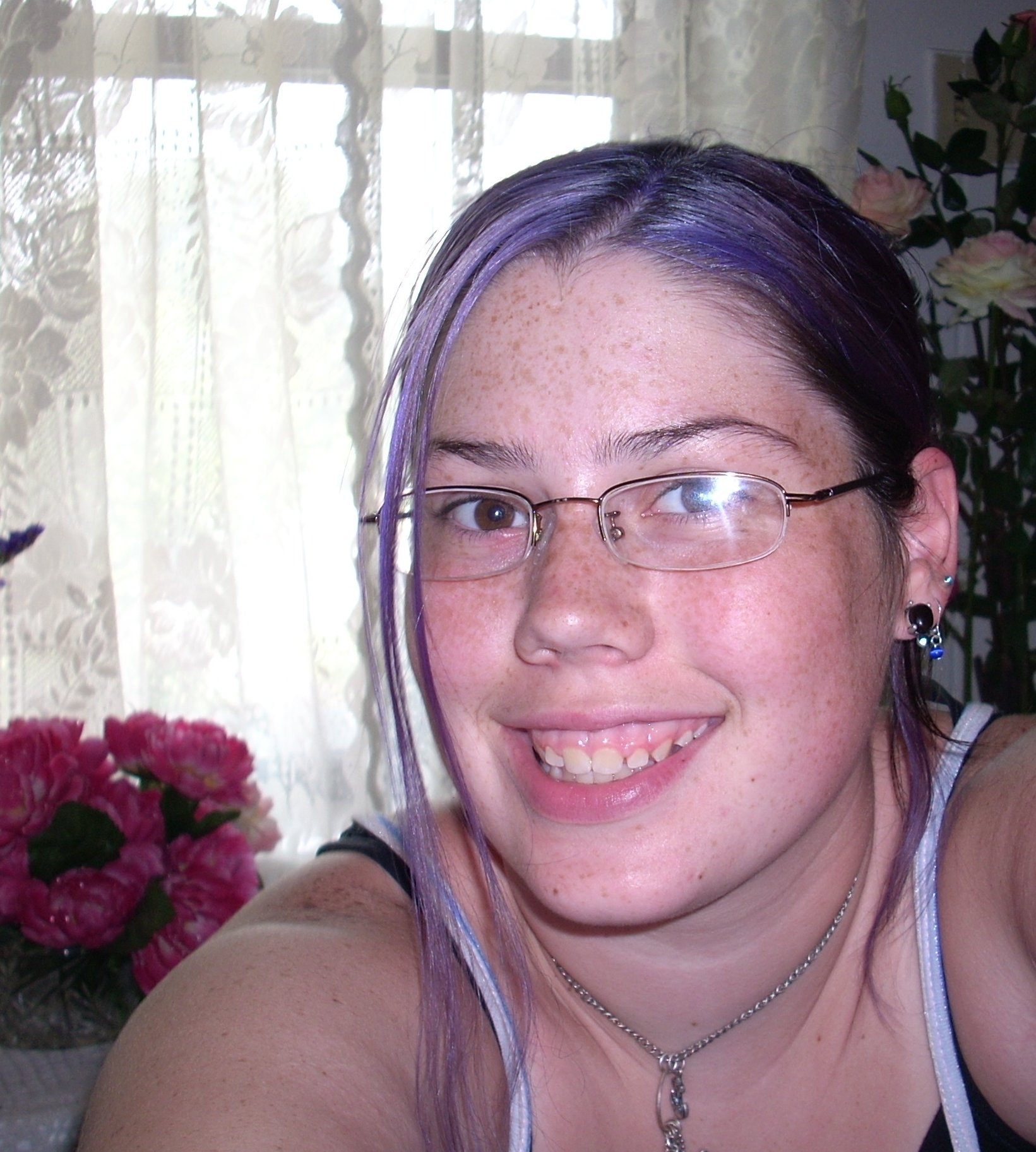 Who’s Who. Honor Roll. Beta Club. Good writer. Avid reader. Harry Potter junkie, with a sorting hat to prove it. Slightly eccentric with a hefty dash of charm and a wide smile. Freckles. Works at a local fast food place to support her new used car and pay insurance. Donated hair to Locks of Love. Listed on report cards as “a joy” to have in the classroom. So why is 17-year-old Rochelle LaPlante about to be suspended on her second day as a senior at Northeast High School?

Purple hair. Well, the color on the box claimed to be “ultra violet.” And for Rochelle, it’s been her normal hair color for some time.

There’s not a word — not one word — in the student handbook, code of conduct or dress code section that says anything about hair color, and bolder, wilder shades than Rochelle’s purple are seen across the social strata at Northeast — in streaks or by the whole headfull. It isn’t a case of gang colors or logo’d T-shirts or bandannas or studded belts.

On Thursday morning, ten minutes after arriving for her first day as a senior at Northeast High School, Rochelle was told by Vice-Principal Nancy Borders that she would have to change her hair back to a “normal” color or face a three day suspension. “Don’t come back with that hair on Monday,” Rochelle was told. No comment was made as to what might happen beyond that three-day suspension if Rochelle’s hair color remained unchanged.

As Rochelle moved through the entrance hall, she was in a crowd that included three students with crimson hair, three with similar purple hues, and one with green hair. None of them were challenged, nor apparently destined to be office assistants.

At the end of the day, Rochelle returned to the school on Trenton Road, hoping to speak with Miss Champion. Rochelle said she was told that while Miss Champion was “all for self expression,” she did not want Rochelle and her purple hair in the office representing the school by way of the office.

Melissa Champion, NEHS principal, admitted she personally would not necessarily suspend Rochelle for her hair color but would “not allow her to work in the office with that hair.” Nonetheless, she is apparently upholding the Vice-Principal’s challenge. According to Rochelle, she was told that she is “not on the outside” now, which was a direct reference to her upcoming work “on the inside” as an school aide.

Outside? Does that mean you are beyond something — apart (whether above or below) the average student, outside of their realm — or maybe because you are in a small number of students in the Aide program, qualified, competent and talented enough to take on the responsibility of assisting teachers in their classroom or the school office. For credit and experience. Rochelle, who has other classes like Physics and Advanced Placement English with its summer reading assignment of Crime and Punishment, is still a student. A student who has shown exemplary responsibility.

“It’s discrimination,” Rochelle says, noting that other students have bolder, brighter hair, for much longer periods of time last year alone, and nothing was done. “It isn’t fair. This is how I express myself,” she said, adding that her first reaction to the threat of a three-day suspension was to read line by line the student handbook and code of conduct. She came up empty on the issue of hair color. Nothing there.

The Dress Code Entry for the Clarksville Montgomery County School System, as posted on the school system website, reads as follows:

The (CMCSS) has established standards for students’ dress. Refer to your Student Handbook (in this case, the NEHS Eagles Handbook), for a complete list of the standards and regulations.

If you aren’t certain whether your dress is appropriate for school, don’t wear it. The principals and faculty will determine whether a student’s clothing is appropriate. Disciplinary action may be taken regarding the dress code at the principals’ discretion.

That’s it. No mention of hair color. Only a troubling statement that principals can use “discretion,” which means that this portion of school policy and what constitutes acceptable lengths and styles in clothing and jewelry is highly subjective, open to individualized interpretation, and therefore wide open to unequal treatment at the whim and judgment of individual administrators.

In referencing the aforementioned “complete list” in the NEHS Eagles Student Conduct handbook, information identical to the in CMCSS handbook is presented, again without mention of hair color.

In an interview that aired on WKAG News 3 Friday at 6:30 p.m., Miss Champion backpedaled from the information and statements originally given to Rochelle Thursday morning and said that students were in fact allowed to dye their hair, as long as it was not a “distraction.” Who defines distraction? Who is distracting? Is it the boy with the green Mohawk? The girl with the crimson hairdo? If purple hair is unsuitable in the front office (as, apparently would be red, green pink etc), should it then be unsuitable throughout school?

But it’s gone beyond the hair color now; it’s the fact that Rochelle feels singled out because she was about to be an Aide. Rochelle added that several of her friends offered to dye their own hair in support of her.

“It’s made me mad,” Rochelle said, noting she is still a student and no less worthy because she chooses to express her creative edge. She was upset by the fact that creativity and thinking outside the box is supposed to be encouraged, yet the lid to the box shuts down over the potential image of one student with colorful hair working in the office for just a few hours a day.

Rochelle notes that dress code items like “sagging” (wearing one’s pants with the crotch at knee level) are rampant and blatantly against written rules, but those rules are not enforced. She asks why she is being singled out, and believes there is no good reason for her to be suspended over the streaks of purple in her hair.

There remains a discrepancy over whether or not the suspension will take place Monday morning, whether the office Aide job will still be there, and whether Rochelle will further test the waters over what she sees as her civil right. She’ll probably keep testing that water. Not because she’s defiant. Because she believes that, until and unless a uniform policy is in place, it’s her right.

Rochelle’s mother, Kelly LaPlante, whose hair is dyed crimson in experimentation for an annual science fiction costume event, said she supports her daughter “completely and with all my heart.” LaPlante said she has always taught her children “to stand up for what they believe in and stand up for what is right. ” She believes her daughter’s rights are about to be violated (via the potential suspension on Monday), and perused the school handbook line by line looking for a reference to hair color. She found none.

LaPlante said she believes everything her daughter said about the incident and what was said to her daughter in the school office. “If there is one thing I know, it is that Rochelle doesn’t lie… if anything she is brutally and bluntly honest. And always has been.”

Editor’s Note: I’ve worked hard at piecing this story together, working overtime to be fair, watching the footage from WKAG, in part because the Rochelle in question is my granddaughter. I love and admire her ability to hold her own against peer pressure, be herself, and be true to herself and her beliefs in all circumstances. The women in my family, all the way back to my mother, have had strong streaks of independence and extreme creativity and have always taken the road less traveled despite the potholes and bumps. If the school system wants to selectively control some aspects of the appearance of their students using the “discretion” of administrators, unequal treatment will inevitably result. If the school wants to control hair color, they need to make it system wide policy within the code of conduct and not penalize a select few — or one. If Rochelle’s assignment to the school office is revoked, and/or if suspension over her hair color is implemented, that is discrimination and a violation of her rights.