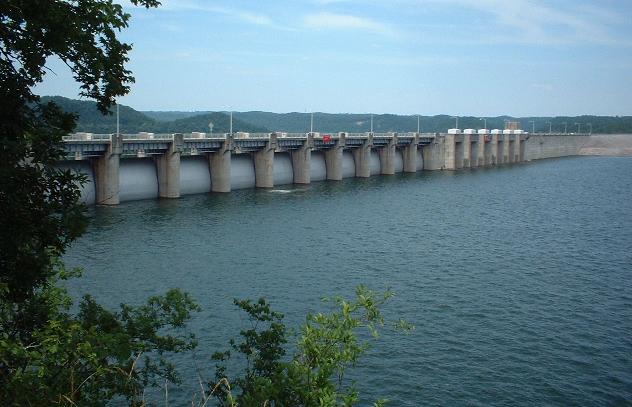 Wolf Creek Dam. It’s a peaceful place in Kentucky, northeast of Nashville and the Clarksville area, and it’s a potential crisis in the making that emergency management officials are keeping their eye on. A wary eye. On the seepage, the erosion of its limestone base, and its sinkholes.

These and other factors that make Wolf Creek one of the five worst dams in the country, one with a high risk of failure. If Wolf Creek fails, parts of Clarksville will be underwater in about 33 hours. 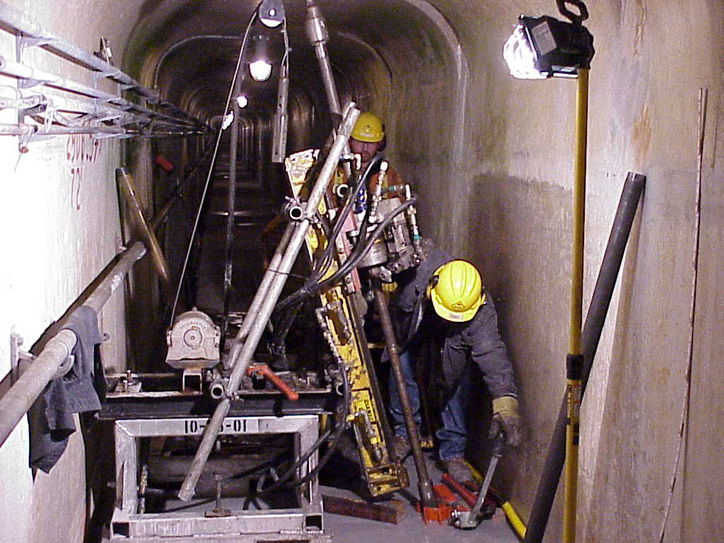 The U.S. Army Corps of Engineers’ Major Rehabilitation Report issued in 2006 recommended a $306 million fix for the Wolf Creek Dam, a project that began over a year ago and is expected to take four years to complete. (At right, workers inside the dam effecting repairs)

Failure of the Wolf Creek dam is scenario on the top of the list for Emergency Management officials at the federal, state and local levels; they meet weekly to address a multitude of issues that could affect our community at large, coordinating services and support systems for a safe and fast response if the worst should happen. 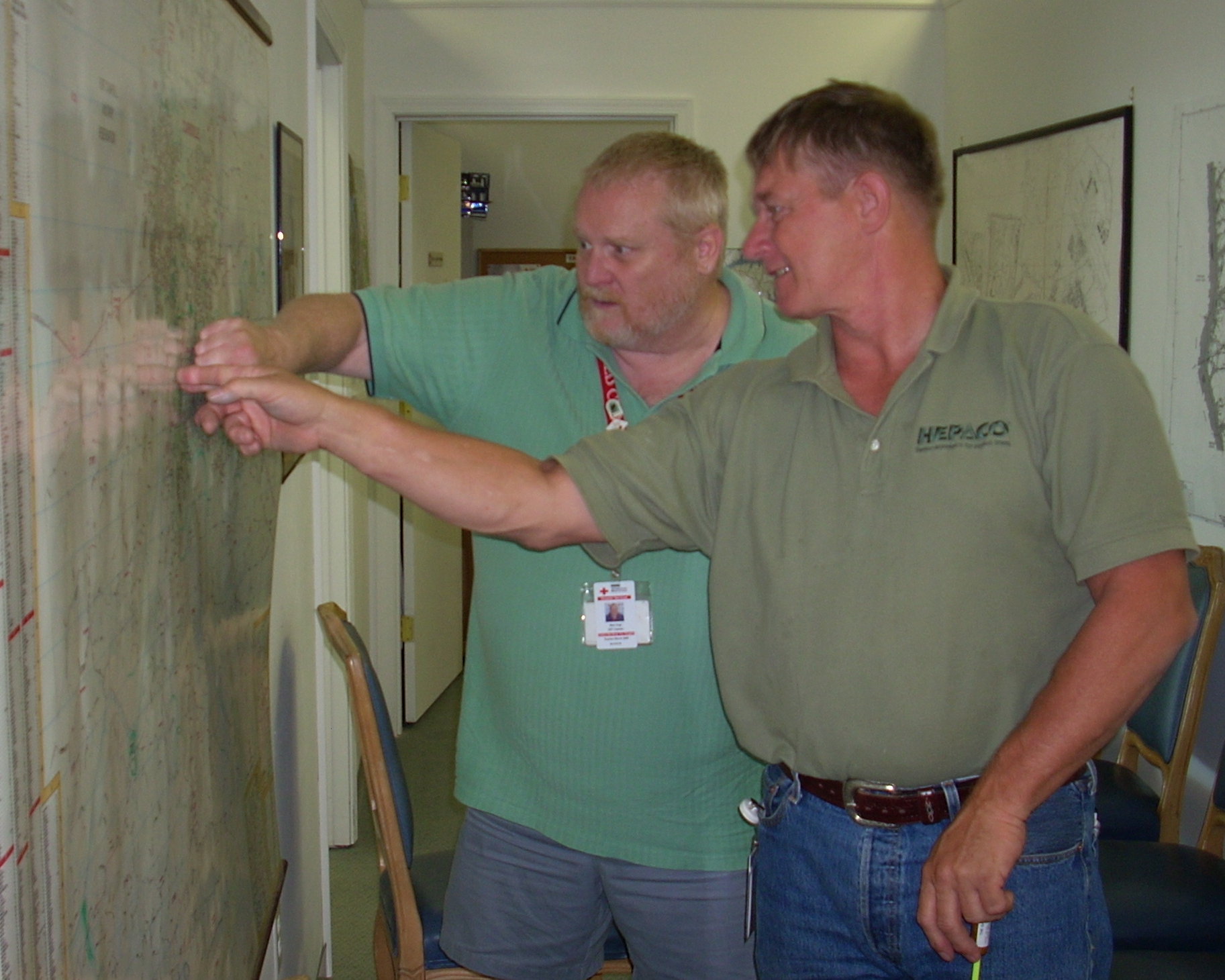 For Cecil Stout, Director of Emergency Services for the Clarksville-Montgomery County Chapter of the American Red Cross, Wolf Creek is just one more thing to worry about and plan for, not just for the enormity of response such a disaster would require. The Red Cross office and thousands of homes and businesses along the city’s rivers could be underwater if the dam fails. Pictured at right, Logistics Specialist Mike Vogt (l) and Stout (r), looking over a map of potential Wolf Creek flood zones.

Stout said his agency continually contracts with sites that can operate as full service shelters in times of emergency — be it flood, tornado, or any other disaster. Start-up supplies are continually stocked and staged around the city, networks and collaborations to meet community needs already exist and are continually nurtured. His volunteer staff is trained and continues to train for management such disaster scenarios. FEMA, TEMA and other local response agencies have disaster management plans in place for immediate implementation if warranted.

Stout, and logistics coordinator Mike Vogt , have the potential flood area outlined on an oversized map in their office hallway. They already know they would have to evacuate Red Cross headquarters and move to a pre-planned alternate base of operations during such an emergency. They already know that travel in and around the city, and therefore access to emergency services and supplies, would be significantly disrupted.

“My worst nightmare is that the dam and a seismic event like New Madrid would happen at the same time,” Stout said.

Disaster preparedness is a complex process

“We may have to shelter people, feed them, handle communications that will connect them with other family members, and assist with basic needs and links to to other agencies also providing services.” Stout noted that Red Cross Disaster Action teams are part of the first response in many disasters, supporting victims, firefighters, rescue crews and police. But the job doesn’t stop there; Red Cross social services makes referrals to other agencies that can assist with more permanent solutions for displaced disaster victims.

Stout, Vogt, Red Cross volunteers, multiple regional Emergency Management staff and Fort Campbell teamed up recently for back-to-back mock disaster drills for two potential mass casualty events: an F-5 tornado, and the detonation of a “dirty bomb.” Both drills took place on Fort Campbell and across north Clarksville. “Both were excellent opportunities to test ourselves,” Stout said. The results from both drills confirmed the fact that “training” pays big dividends in terms of disaster preparedness and response.

And every time Stout and Vogt move through the Red Cross office, they pass by the wall with the map and the flood stage markings.

A bit of Wolf Creek history

Wolf Creek dam was designed and built over a period from 1938 to 1952 as a flood control project, with the added benefits of hydro-power production and recreation via the reservoir (a.k.a Lake Cumberland) created by dam construction. The lake is largest reservoir east of the Mississippi River and includes 1796 feet of concrete dam and 3940 feet of clay embankments. Highway 127 in Kentucky runs across the top of the dam. The dam has been operating with a reduced level since 2005, reducing risk to people and property but also impacting recreational use of the lake. Currently Lake Cumberland is holding at a 680 foot level, but that could be reduced at any time if further problems develop. The Corp monitors the status of the dam and nine others on the Cumberland River system for any change in status that would affect public safety. 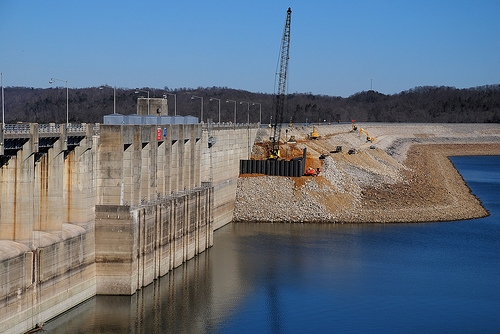 The trigger for the problems at Wolf Creek Dam lies in its foundation: a limestone base riddled with cavities and caves and prone to erosion. Limestone is “soluble in weak acid,” and over time that erosion has weakened the very base that supports the dam. Driving through any road cuts in the region offers a first-hand view of how limestones decays and breaks apart. “Karst topography” is a three-dimensional landscape shaped by the gradual dissolution of solid layers of bedrock, often carbonate rocks such as limestone of dolomite, which have distinctive patterns of underground drainage and little or no surface drainage, hence the formation of caves and caverns that undermine the surface, and in this case, the base of the dam.

Serious problems were noted in 1968 when wet areas developed near the base and muddy waters were observed, along with two sinkholes in the embankment, indicators that foundation and dam substances were being washed away by seepage. Emergency action was taken in 1968-69 to fix those problems. A grouting program completed in 1970 injected enough solids into the dam to pave a road six inches thick, 20 feet wide and 5.5 miles long. It solved the problem, and prevented dam failure, until now. Advisors to the Corps recommended construction of a concrete cut-off wall to be build along the axis of the dam under its embankment. In essence, a new barrier to hold back water and stabilize the dam.

Cut-off walls were added to two-thirds of the embankment, a decision some experts felt was “short sighted,” suggesting that eventually, a wall would be needed along the entire length of the embankment. That time has come.

Over the past several years, a combination of visual observations, instrumentational readings, and borings have proven that uncontrolled seepage, which is still occuring, threatens the stability and integrity of the dam.

Peripheral to the structural problems of the dam are other events that could converge to trigger disaster:

So what happens next?

The water level behind the dam is holding at 680 feet, subject to further lowering if the situation warrants. Emergency repairs are underway, with three years (give or take a few months) before the project is done and the dam deemed “safe” again.

Meanwhile, emergency management officials at the federal, state and local level — everyone from FEMA, TEMA, police and fire officials, the Red Cross and others meet regularly to keep tabs on a number of things, including Wolf Creek. 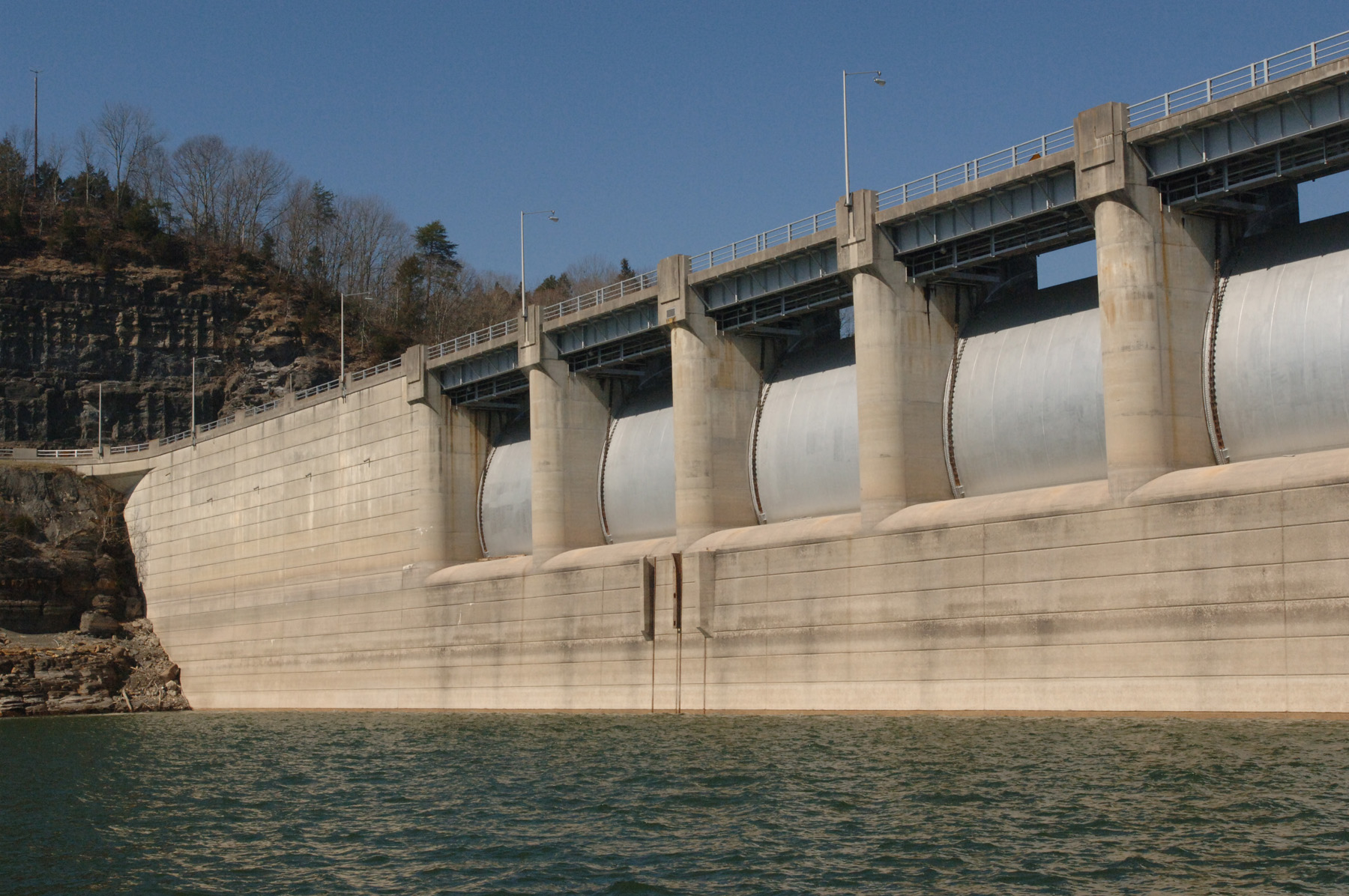 If the Wolf Creek failed, the worst case scenario would be a gradual rise in Cumberland River (and tributary) waters that would bring major flooding to Clarksville within 33 hours. Riverside Drive and all its recreational spots and businesses would be underwater. Bridges would be closed and/or underwater. A number of areas in town would be cut off. Many areas would be completely evacuated. An estimated 3,000 businesses would be affected. Many subdivisions would be flooded or “islanded,” affecting thousands.Water, sewage (waste treatment) and electrical services would be affected in many areas. Should floodwaters travel from the dam to as far as Clarksville, a breach of the Wolf Creek Dam has the potential to affect one million people and thousands of businesses. The dollar value of damage would be staggering.

Emergency management officials note five potential water levels for the Clarksville area, from a modest level one to catastrophic level five. Maps of potential flooding are availabble through links on the Austin Peay State University, Clarksville Red Cross and Wolf Creek Dam websites, with GPS locating that can pinpoint how floodwaters might affect your home and neighborhood.

Even the Red Cross would be relocated since its headquarters off Riverside Drive would be inundated. That’s been planned for, along with a host of responses to projected needs for a potential Wolf Creek Dam disaster.

Should trouble develop at the Wolf Creek Dam, the Emergency Broadcast System would be activated over all weather, radio and TV stations and emergency management offices, beginning with those located closest to the dam and working downstream through Nashville and working downstream. Local emergency management teams are responsible for local notifications and evacuation plans.

Stout suggests that just as residents prepare for severe storms including tornados, they should be aware of the potential of a problem with Wolf Creek and prepare for that possibility as well..