The mandated and much anticipated report on the status of the Iraq war isn’t even out yet and already the backpedaling is under way: Pentagon officials are asking for revisions, Bush politicos want the standards set for a democratized Iraqi regime lowered to make the record of insufficient progress look better on paper, and the D.C. powers that be are taking the stance that “more time” is needed to pull the Iraq debacle together. After all, if you can’t meet the standards (goals, objectives), dumb down those standards (goal, objectives). Seems to be working for America’s Army recruiters …

The report will be presented to Congress Tuesday, and President Bush will present his view of the data on September 15th in an attempt to validate his push for continuation of the multi-billion war effort and continued presence on Battlefield Iraq. The report, supposedly the product of military leaders including General David Petraeus in Iraq who are “assessing” the status of post-Saddam Iraq, is in fact being amended, adjusted and otherwise penned by the White House. Petraeus and U.S. Ambassador Ryan Crocker are expected to speak before Congress on the 11th or 12th of September.

A careful monitoring of national websites and online versions of major newspapers gives us the following headlines:

We have provided the GAO with some information which we believe will lead them to conclude that a few of the benchmark grades should be upgraded from ‘not met’ to ‘met.’ — Geoff Morrell, Pentagon Press Secretary.

While lawmakers have been home for summer recess, Mr. Bush has been able to use his presidential platform , delivering speeches to promote what he calls the success of his troop build-up.

The momentum back in June and early July was really running hard against the war, and it was starting to snowball. But that snowballing stopped, and it has probably kind of reversed itself somewhat. — Charley Cook, Analyst & Editor, The Cook Political Report/NYT

The Government Accountability Office (GAO) will report that at least 13 of the 18 benchmarks to measure the surge of U.S. troops to Iraq are unfulfilled . . .

CNN went on to report that:

…the administration is making a case to play down the findings…

WASHINGTON — Stung by the bleak findings of a Congressional audit of progress in Iraq, the Pentagon has asked that some of the negative assessment be revised.

After four years of combat, and four years beyond Saddam Hussein, Iraq can claim only a 20% success rate in meeting its objectives, according to CNN. Critics of the forthcoming report say it’s stringent guidelines were predestined to “lock in failure. So if you don’t like a report, re-write it to suit your needs (a great example for all the children ‘left behind’ to study in some future history class). In this case, define “needs” as more taxpayer dollars in a flow of undetermined duration.

The Washington Post, in a story released today, said the GAO report indicates that only three of the 18 political and security benchmarks set for the Iraqis have been reached, though preliminary reviews released in July indicated that eight of the 18 terms were met. The Post referred to the report as “strikingly negative.” Not what the Bush White House wanted to hear. White House spokesman Tony Snow said it was ‘no secret” the benchmarks had not been met.

What angers many Americans (in addition to the outrageously high cost of this war, the toll it is taking on soldiers, the body unrelenting counts) is that while ordinary American soldiers, many on extended multiple deployments, are fighting the battle for Iraqi freedom in the broiling desert heat, Iraqi Parliamentarians are on vacation — just as our Congress and Senate were throughout August. 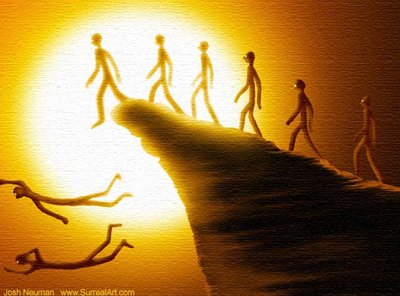 One reported sourced from Sen. Harry Reid’s office indicated that the President would be in for a “reality check” as Congress chews over the report and suggested that Republicans who support the President on the Iraq War issue would be jumping over the same cliff. The image of lemmings jumped into my mind as I churned that statement about.

To sustain Battlefield Iraq at its present pace, Congress must approve both new financing for the war and supplemental funding for the existing cost of conflict in both Iraq and Afghanistan. For FY07, that is a staggering $147 billion dollars.

It costs American taxpayers $200 million a day to stay at war. Total costs (direct and indirect) will be at least $400 billion dollars, and one estimate has the tab topping TWO TRILLION dollars. That’s $2,000,000,000,000. That’s a lot of zeros. That’s a lot of debt to saddle on the next generation — and it is the next generation that will still be picking up the lion’s share of the tab for this supposedly internationally-supported effort to implement democracy in Iraq. Tennessee’s liability, its share of this cost, comes in at just under $7 billion dollars. So far.

If not vested in war, the funding amounts in question would have done the following:

That’s the real-life real-time net worth of the Iraq war. That’s not calculating cost of providing universal health care to the American people, infrastructure repair and upgrades to our highways and bridges, border and port security, investments in sustainable energy, and myriad other issues/programs. Is it perhaps time for Congress to ask the people what they want their tax dollars invested in?

I’ll be watching and listening as the debate begins to rage, as the manipulations and revisioning develop in the Machiavellian realm otherwise known as Washington, D.C. Every American should be watching.