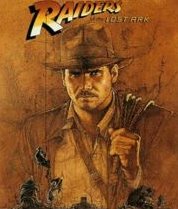 The first time I watched Raiders of the Lost Ark (1981), I left the theater exhausted, as if I had raced through the adventure right alongside the now legendary Indiana Jones. I raced back to the studio with my partner Jesse and we wrote our review that night, taped our radio program in the wee hours of the morning for a 7 a.m. airtime, and made plans to see it again. That night.

Harrison Ford made the inter-gallactic leap from his dashing Han Solo of the futuristic Star Wars to the historic backdrop of pre-World War II and carved a niche in a second, equally swashbuckling role as a seemingly mild-mannered college professor with a secret life as a treasure hunter. Raiders hits the screen on a dead run, with ‘Indy’ scooping a golden idol and fleeing angry natives (Hovitos) in a plane that has the one thing he hates most: a huge snake. That ‘little’ weakness is endearing in this tough guy persona.

Indy is about to get the biggest challenge of his life in the form of a quest for a holy grail of sorts: the Ark of the Covenant, the supposed repository for the Ten Commandments of biblical fame. He has to grab it before the Nazis do, for whoever holds the covenant will rule the world.

Enter Marion (Karen Allen) as his gutsy former lover turned partner, a woman who holds her own against killers, conspirators, and all things evil. A Princess Leia for the 1930s.

The series continued with a prequel, Indiana Jones and The Temple of Doom (1984), my least favorite of the original trio. Set in 1935, the film — based on a George Lucas short story — opens in Shanghai in a club called Obi Wan, where an illegal artifacts trade involving diamonds goes bad and the characters are quickly on the run, this time with a juvenile sidekick called Short Round. They escape on plane which is abandoned by its pilots; the bail out in a life raft and ride the raft down snow-covered Himalayan slopes, tumbling into a temple and a mystery involving stolen idols and the hopes of a native people.

The series jumps forward in time with Indiana Jones and the Last Crusade (1989). This time Indy’s sidekick is his dad, Professor Henry Jones, marvelous played by Sean Connery, who wields an umbrella as well as Indy does his whip. Religion and relics are once again the quest: this time it’s the pursuit of the Holy Grail (a cup — this film pre-dates the Dan Drown versions of Grail legend rooted in Mary Magdalene, but that another movie altogether). Here, Kate Capshaw is the love interest, but without the charm and spunk exhibited by Karen Allen.

Steven Spielberg exploded this film series over 25 years ago, and it has stood the test of time and a generation of new viewers. With it, he launched a series that, after an 18-year hiatus, will resume again in May 2008, with the Memorial Day weekend release of Indy film #4, listed on websites only as the Fourth Installment of the Indiana Jones Adventures, or more simply, Indy 4.

Ford, now 64, apparently still has what it takes to be an action hero. Cate Blanchette will be the new love interest, but Karen Allen reprises her Marion role. This film is the fourth of five originally planned when the Indy series was first debated in the 1970s. John Williams will once again score an Indy film.

Editors’ note: this is the last of the summer series, Drive-In Saturday Night, which took a look at films of yesterday, old favorites from the era of drive in movie theaters with sound boxes that hooked over the windows, homemade popcorn and triple features on Saturday nights. We hope you’ve enjoyed the films, and that they’ve brought back terrific memories.