A legend passes; the world mourns … 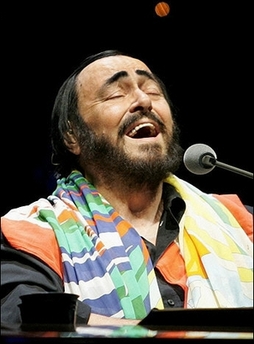 Legendary tenor Luciano Pavarotti, 71, has died. He was considered to be the greatest tenor of his time, and retired in 2004, but was on a farewell tour when he was stricken with pancreatic cancer in 2006.

His family and closest friends gathered at his Modena home Wednesday evening as Pavarotti ‘s condition declined sharply. He had been treated for pancreatic cancer and was reportedly suffering from kidney failure, according to Italian news sources.

He filled his life with music, and his voice filled our lives with a beauty so intense, so overwhelming it made us cry for the sheer joy of it. Our ecstasy was mirrored in his eyes, his voice, his dazzling smile, and the sheer effervescence of his life.

This clip showcases Il Galdiatore, possibly his greatest vocal work. The slide show itself captures the essence, the heart, soul and music of this magnificent man and his larger than life career. 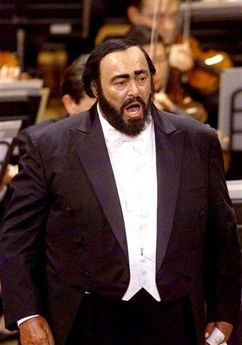 The Italian born Pavarotti made his operatic debut in 1961 as Rodolfo in Puccini’s La Boheme, and in 1965 was cast with the Miami Symphony opposite Joan Sutherland, and quickly moved from there to the stage of La Scala, reprising the role from La Boheme. He sang Rudolpho again in a 1977 telecast of Live from the Met (Metropolitan Opera/New York City) and became a part of operatic history. He worked extensively with conductors Zubin Mehta and James Levine.

As the 1980s unfolded, Pavarotti created the The Pavarotti International Voice Competition to promote and support emerging young talent in opera.

In the latter half of his career, Pavarotti teamed up in an invincible collaboration with fellow tenors Placido Domingo and Jose Carreras, under the baton of Zubin Mehta, for what become a series of “Three Tenor” tours that circled the globe and brought the best operatic works to millions of enthusiastic listeners (and created millions of new fans) via global broadcasts of their concert performances in the world’s major cities.

His repertoire include staples such as Giacomo Puccini’s Nessun Dorma from Turandot, with its powerful exclamatory, Vincero!; the bellowing laughter and sobs of Vesti La Giubba from Leoncavallo’s Paggliacci; the classic  Il Galdiatore; the triumphal Celeste Aida from Giuseppi Verdi’s Aida; Schubert’s beloved spiritual Ave Maria; and a score of classic Italian melodies including Come Back to Sorrento, O Solo Mio that were guarantee to bring down the house.

In 1990, his performance of Nessun Dorma for the FIFA World Cup in Italy, transcending the event and solidifying that aria one of several trademark numbers for the tenor. This was followed by the first of the Three Tenor performances on the eve of the World Cup final. It was tour de force performance to be followed by new concerts at the World Soccer finals, Los Angeles in 1994, Paris in 1998 and Yokohama in 2002.

His concerts included solo performances and some interesting collaborations with performers for to raise money for Bosnia, Kosovo, Guatemala, War Child, Iraq and to support word to eliminate land mines, a project that corresponded with work done by the late Princes Diana. He sang with Vanessa Williams on Saturday Night Live (the only opera singer to ever do so), and performed with U2 in that band’s 1995 song, Miss Sarajevo. He received the Grammy “Legend” Award. other performers who have teamed up with Pacarotti inclide Michael Bolton, Lou Reed, Ricky Martin, the Spice Girls, Darren Hayes, Joe Cocker, Elton John, Andrea Bocelli, and Bryan Adams, and that’s the short list. Pavarotti was universal. 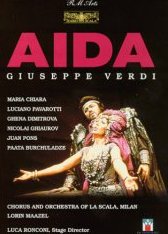 Through music, as an individual artist,as part of the acclaimed Three Tenors and as a fixture at Lincoln Center’s Metropolitan Opera, Pavarotti was able to build bridges between people, cultures, and nations, his voice and his music a unifying essence that transcended all conflicts and brought millions of people together to share the peace, passion and beauty within the music he gave so freely.

I was privileged to hear him sing once, live, in Hartford, Connecticut, quite a few years ago. There, for the bargain price of $100 a ticket, I sat three rows from the civic center rafters, mesmerized and riveted to my seat by the sheer power and majesty of his voice. I took my mother, herself a concert performer at one time, to this concert, springing her from her nursing home bed with the assistance of her nurse, a young man equally addicted to Pavarotti’s music and more than willing to make the drive and get my mother into and out of the Hartford Civic Center, where we listened to a voice of such haunting beauty and power that we were reduced to tears.

Here are other clips from Pavarotti’s repertoire.

Nessum Dorma, from the opulent opera Turandot, is perhaps the song most greatly associated with Pavarotti by global audiences. His vocal range and force as seen here is unparalleled.

This lush presentation of Celeste Aida was staged at the Vienna State Opera in 1984.

There was no finer voice than Pavarotti’s to grace Schubert’s classic hymn, the Ave Maria.