Hundreds of friends and fans came to the Customs House Museum Saturday evening for the opening celebration of Olen Bryant: A Retrospective, a world class exhibit of ceramic, wood and stone sculpture, a sampling of Bryant’s work from the early 1950’s to the present.

A Tennessee native and Professor Emeritus of Art at Austin Peay State University, Bryant was introduced to Saturday’s crowd as “an educator, mentor and humanitarian of the first order,” one who has guided and prodded his students to “find their voices” even as he continued his quest to develop and expand his own. 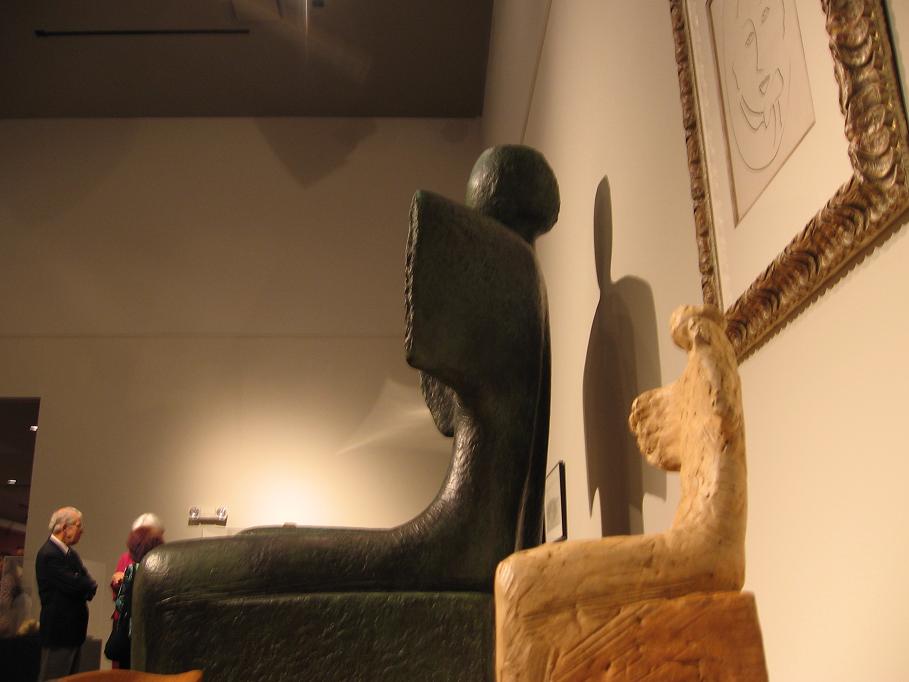 Meandering through the crowds, one could hear the comments of friends, of art lovers, watch them inhaling in awe at the beauty and substance of this work. In an era where art is displayed but art lovers are kept at safe distances, the Customs House exhibit was presented in a manner that invited touch, that invited close inspection of the most minute detail of each piece, be it a small “sleeping stone” or a majestic chair with outstretched arms. The art itself invited it.

Bryant, recipient of the Distinguished Artist Award from the 2007 Governor’s Awards in the Arts, greeted visitors at the museum’s entrance, and later spoke briefly to a gathered crowd, saying in his characteristically quiet voice that now “he knows what a deer feels like, when its looking into the lights of a car.” He said this experience “honored” him.

The collection is diverse, a sampling of majestic polished wood carvings that seem almost molded by hand rather than carved with metal tools; supple, succulent wood with a satin sheen that invited touch, wood in which Bryant found and released an ethereal spirit, a hidden essence unearthed and brought to the light of day. A gift to the rest of us. 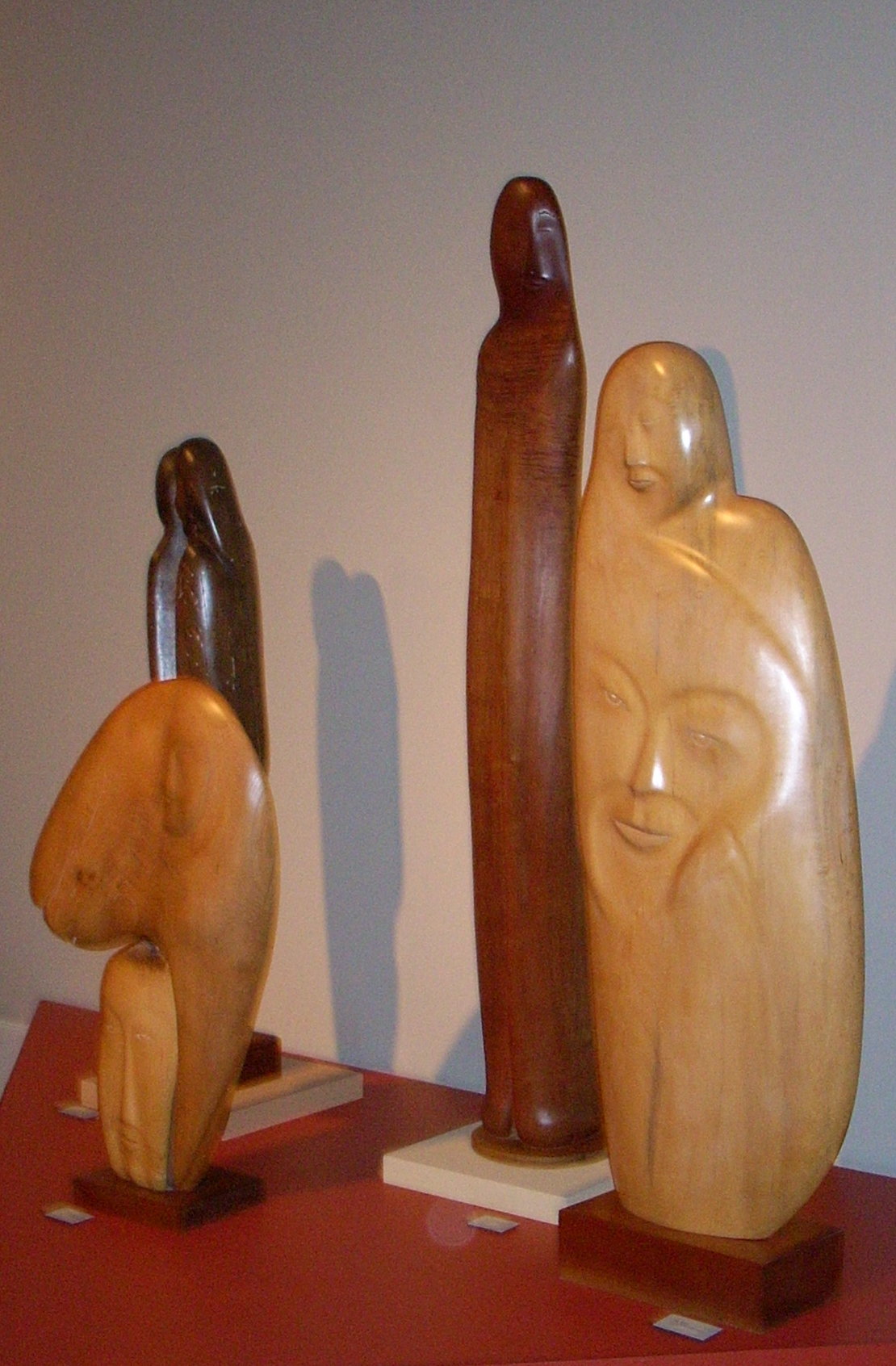 The wood carvings fashioned by his touch are deceptively simple: the hint of eyes, mouths, faces, figures in many cases barely elevated from the base wood, but all the more expressive for it.

In one tall piece, The Actor, we are given the essence of a figure but with a second face midsection, a second ‘voice” emerging. And that is part of the truth, the honesty of his work; that form, feeling, passion are within us all and continue to emerge, to shape, to erupt or more often quietly blossom from within. Bryant deftly finds that inner beauty and presents it to us without revealing the ending. That is left to our imagination and interpretation.

Numerous ceramic pieces, many of primitive female forms with lush, full but non-graphic shapes recall the Goddess figures of ancient cultures and for me were reminiscent of Goddess art and other Peruvian pieces exhibited in Lima’s Gold Museum and the museum/home of Francisco Pizarro. The rich brick earth tones in many of the ceramic pieces evoke a sense of timelessness and a connectedness to Mother Earth.

Bryant’s famous Sleeping Stones, some clustered in a shallow dugout, are simple designs to grace a garden, a desk, a personal library — restive pieces that call out for touch.

Visitors were given a glimpse of Bryant’s process in a pedestal display of sketches and materials, and through a series of photo-graphs of the artist at work, displayed throughout the galleries. 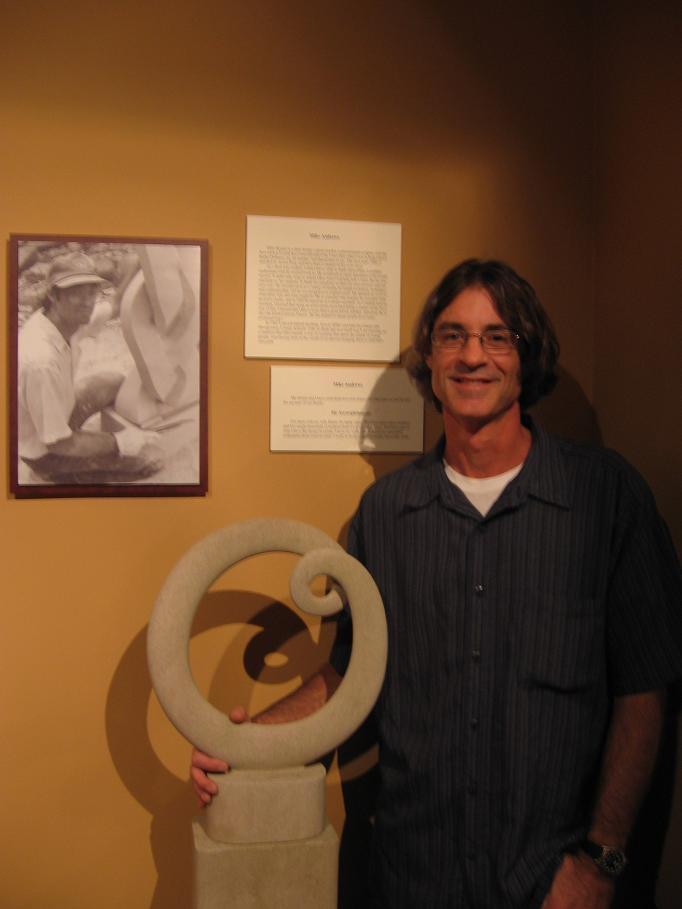 In an alcove, testimonials from Bryant’s students and samples of art by those students were prominently displayed. At right, a selection of works by former students of Olen’s, including curator Tom Rice and Michael Adams (pictured left with his work, Infinity).

Bryant holds a Master of Fine Arts from Cranbrook Academy of Art, and has studied both in the United States and abroad. Bryant is a founding member of the Tennessee Association of Craft Artists.

Guest Curator Tom Rice assembled a striking and powerful collection of Bryant sculpture in clay, stone and wood from the early 1950s to recently-completed work. Rich Goodwin Created a video detailing the life and work of Olen Bryant on view with the exhibit.

The exhibit, showcased in the Crouch, Orgain and Bruner galleries, runs through December 31. 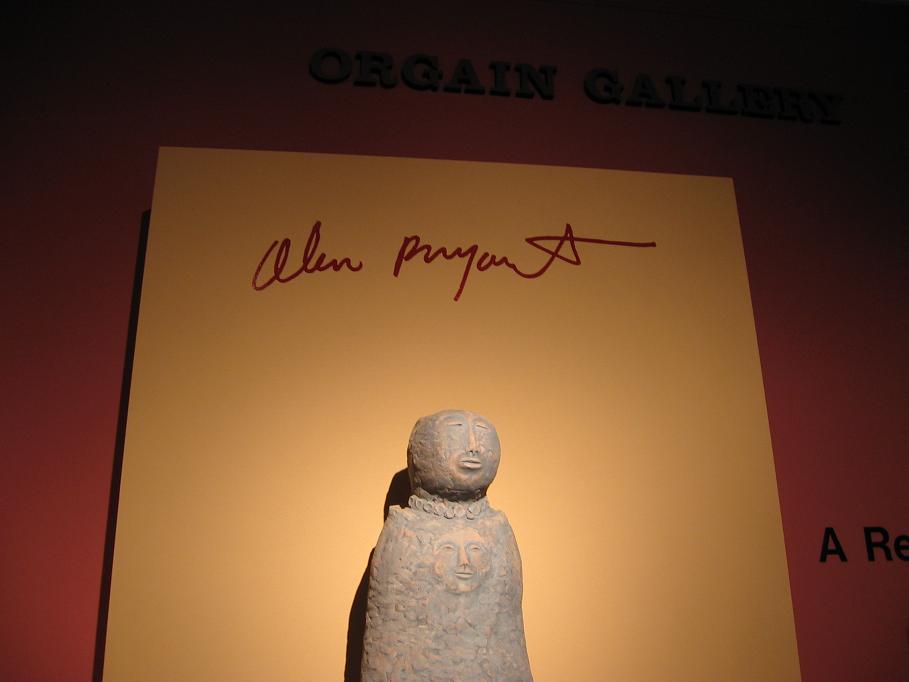 The striking entrance to the Bryant exhibit. Bold color, and a simple acknowledgment and introduction to Olen Bryant. 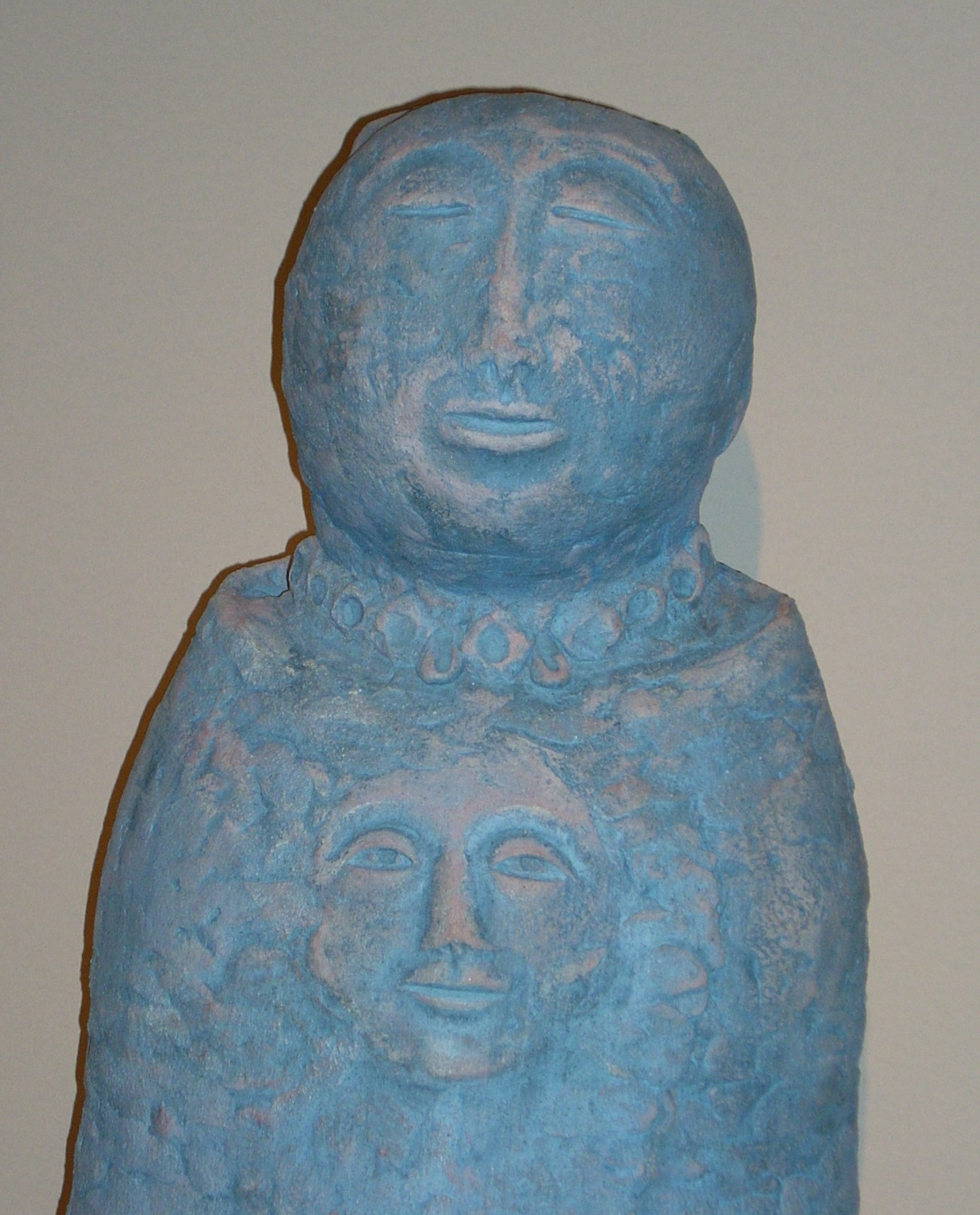 A study in blue, the face “sleeping” while the inner spirit is alive, a juxtaposition of the conscious and unconscious, the hidden waiting to be found. 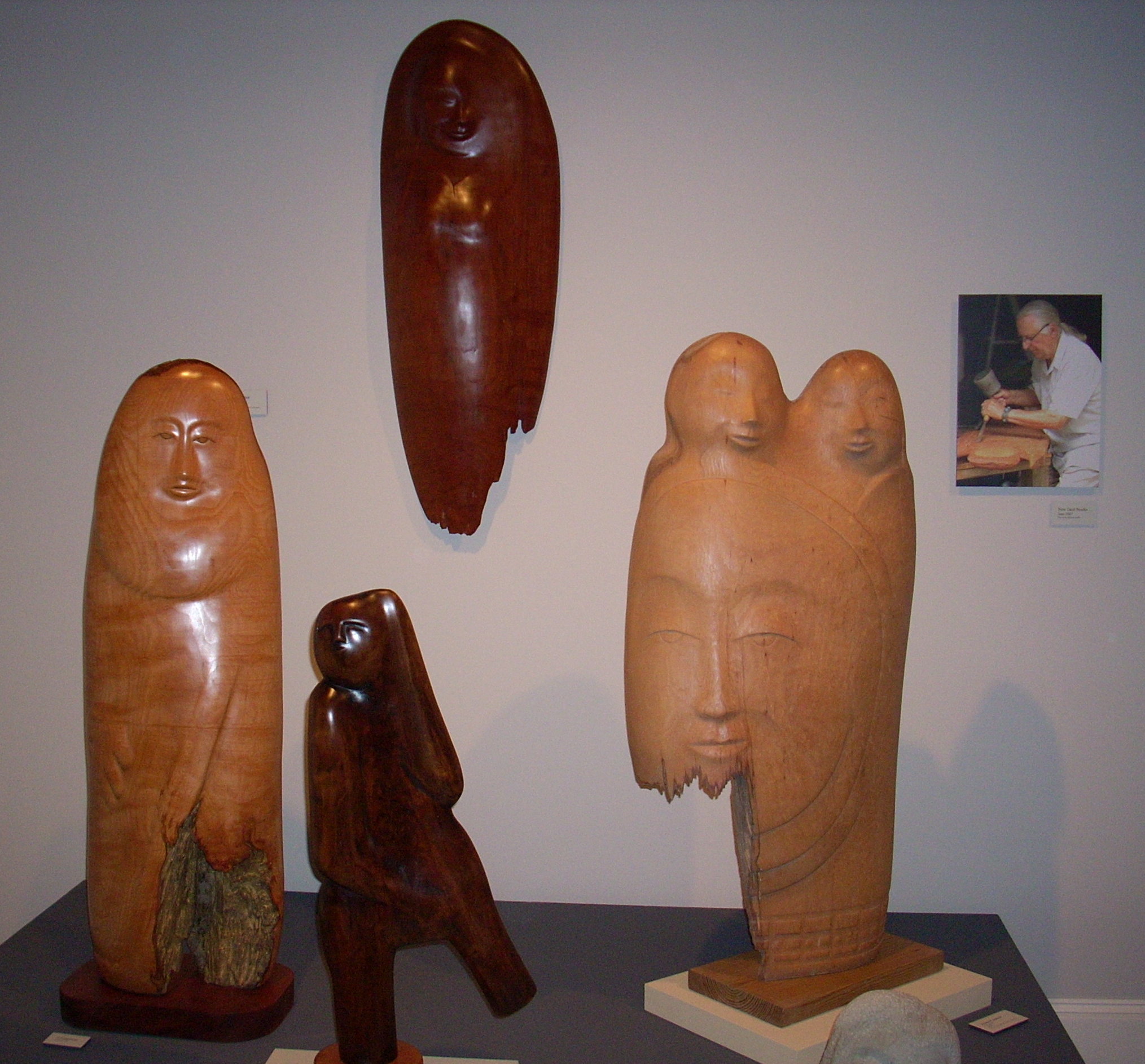 A grouping of wood pieces, the sheen shape and subtlety inviting touch. The exhibit allows visitors rare intimacy with each of the pieces. At the right of this cluster is one of the portraits of Bryant at work in his studio. 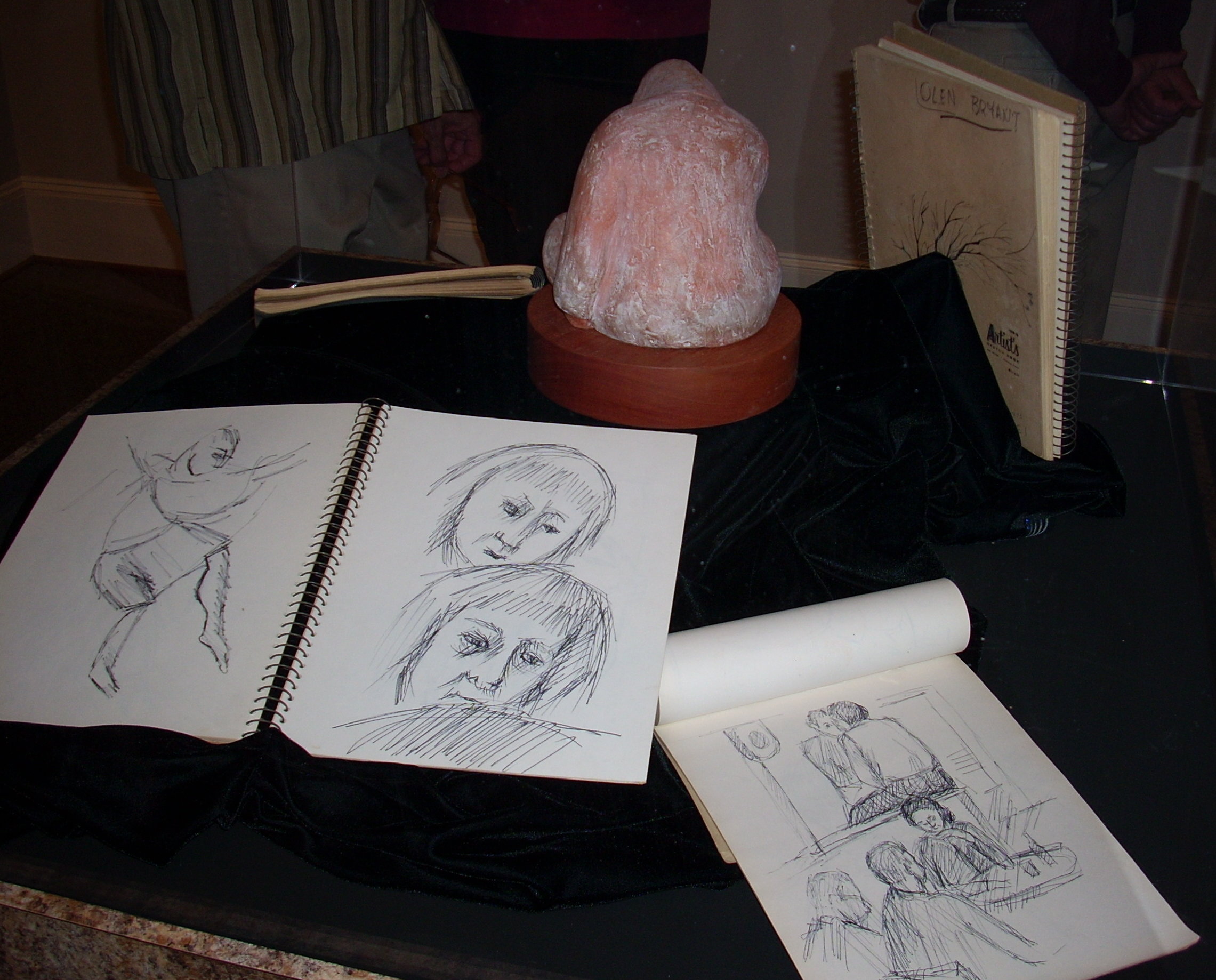 Sketchbooks and raw materials give insight into the artist’s process.