Cars seized over packs of cigarettes

Revenue agents surveil Tennessee residents who buy cigarettes in neighboring states. Those found in possession of two cartons +1 pack will have their car confiscated. 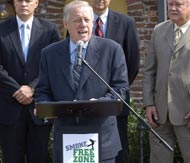 Tennessee revenue agents will be watching, ready to accuse residents of the new crime of driving with 21 packs of cigarettes purchased across state lines. Those carrying just over two cartons of smokes in their car might lose their vehicle for good. The crackdown announced late last month is part of an effort to defend a July hike in the cigarette tax from 20 to 62 cents per pack from nearby states with much lower levies.

The net result is that Tennessee will confiscate and sell cars worth thousands or tens of thousands each over a claimed loss of tax revenue of $13.02. Cigar lovers likewise become criminals under the statute and face six months in jail if accused of driving with 51 cigars. A heavy smoker carrying a three-month supply — enough to evade an alleged $155.62 in cigarette tax — is guilty of a felony under the Tennessee law. The penalty, in addition to car confiscation, is up to six years in prison and an additional $3000 fine. Earlier this month Governor Phil Bredesen (D) embraced an official anti-cigarette policy to complement the confiscation program.

The most controversial aspect of the seizure program is that Tennessee Department of Revenue agents on September 27 began placing stores lawfully selling cigarettes in other states under surveillance. In Kentucky, for example, agents watch for cars bearing Tennessee license plates leaving shops that sell tobacco products. Once these cars cross back into Tennessee, they will be stopped and searched. If cigarettes are found, state law does not recognize that such cigarettes could be for personal use.

Even a dealer with the lawful right to carry 21 out-of-state cigarette packs will lose his car on the mere accusation of revenue agents until the commissioner decides to accept the evidence presented.

“Any unstamped tobacco products found in any vehicle… shall be prima facie evidence that such were intended to be used for gift, sale or distribution,” Tennessee Code Section 67-4-1020 states.

Seized vehicles are sold with 90 percent of the profit going into the state general fund, and 10 percent into the revenue department’s own budget. The tax program is designed to raise $228 million.

This article is by TheNewspaper.com [1] which provides objective information about the politics of driving. Based in Washington, D.C., They offer news items and extensive documentation sourced from around the world, with special focus on red light and speed camera enforcement.

TheNewspaper.com is a not-for-profit site, and its editors and contributors have no financial ties to the issues discussed. We urge readers to always consider the financial interests of all sources quoted regarding traffic enforcement. In every case where it is possible to do so, we host the full text of reports and original source material. Government documents and other useful material are often removed from their own websites over time as new items are added or site design changes. Our intention is to host information in such a way that it becomes part of a permanent, organized record.

What is the Politics of Driving?

TheNewspaper covers government policies that affect one of the largest segments of society today — the motoring public. There are 200 million licensed drivers in the United States, 41 million in the United Kingdom and 13 million in Australia. Policy trends that begin in one country eventually make their way to other parts of the globe. For this reason, we treat issues of transportation policy from an international, not regional, perspective.