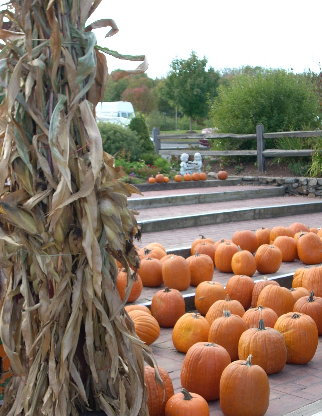 Twice in the past fifteen years I’ve answered a very specialized call for help from a friend in New England, a friend of thirty years standing who works hard, writes harder, and panics rarely. He panicked, with good cause. And so I found myself On the Road in America, in pumpkin season, in the northeast, house hunting.

Fifteen years ago, I found Jesse a fabulous apartment in Deerfield, Massachusetts, an oddly-shaped studio in the upper tier of an even more oddly-shaped ultra-modern house, set in the woods on the edge of small cliff, decks extending out to the edge with a view of the Pioneer Valley. Birdfeeders everywhere. An occasional misguided moose in the cow pasture several hundred feet below. Steep dirt driveway that made icy winter driving “interesting.” But after seven years, ownership, and zoning shifted and that apartment was suddenly a thing of the past.

Then came Granby, Massachusetts, and a comfy one bedroom in the basement of private home at the end of another long, frost-heaved, mud-puddled dirt driveway, past a stand of trees that marked the local Christmas Tree Farm. Incongruous Cape Cod Fishing huts and colorful marine buoys marked the otherwise hidden private driveway. Nice place, nice owners. Retired. ‘Have trailer, will travel’ people. Double French doors opened into the bedroom in this unit, and a wall-to-wall stone fireplace sealed the deal. How good can it get for under $500 a month?

But all things change, and eight years later the retirees are reclaiming the entire house. And while there was no rush, no pressure to vacate, no one wants to move during winter in New England. And Jesse will be on the move again.

Enter Serendipity. The frantic phone call, his swoosh of breath released when I said I would come help, the intensive juggling of schedules, and the realization that I had five days to make it all better in New England. The bonus realization that I would be in a New England flamboyant, resplendant in the brilliant mantle of Autumn, at a time that coincides with an art show I didn’t think I would get to see by an artist whose work I desperately wanted to see again, live. Real. Touchable. And there would be dinner with friends I haven’t seen in almost a year.

It didn’t take long to pack.

I settled in Friday night, and on Saturday morning went to visit another friend, this one of 55 years standing, who also has a house with a longstanding vacancy. I went to B’s store, cushioned myself in a comfy recliner opposite him, and we chatted.

I have the perfect tenant for you, I said. There. It was on the table. B knew Jesse. Jesse knew B. I knew both men better than either cared to admit. The potential landlord wanted no hassles and no aggravation and the minimalist rent on time. The potential tenant wanted no hassles, no aggravation and is meticulous about paying all his bills on or before time. The potential landlord bought the paint for the front room, and the potential tenant is willing to paint. And shovel in winter. Both were antsy about the shift into a landlord/tenant relationship, both panicked, both “slept on it” — it is now a done deal.

It’s a city apartment in one of those “community within a community” districts. It’s a second floor, small, with oddly shaped ceilings and a few odd nooks and crannies. Sunny. Clean. Cheap. Convenient. Near both of Jesse’s jobs, with a room that will be his writing center, the place where the revisions of his 500-page manuscript will happen. And new work will emerge.

It’s different from the kinds of places I usually find for him, but Jesse’s work is now in another county — the one he’s moving to. He can bring his security clearances to work at job #1 in less than 20 minutes, and his booming radio voice to work at job #2 in just five minutes.

And so on Sunday afternoon, I found myself in Grossman’s (the hometown “surplus” version of Lowe’s or Home Depot) buying textured paint and brushes, and pricing shower surrounds and square shower mats. And still later, I found myself lying on the second floor bathroom tile, pipe wrench in hand, checking out a water line leak that sprang up when B and I turned the shutoffs to ‘open.’ Phase Two: Take apart the toilet to replace gaskets and seals.

In this neighborhood, this place of my life, I remembered an Easter Sunday when, after a beautiful ham dinner at the perennially elegant table in B’s main house, I found myself lying on the floor, under the sink, pipe wrench in hand, looking up at a balky, tempermental garbage disposal, a piece of machinery that I was determined would not get the best of me. My best friend Robin, visiting from Vermont, stood close beside me, passing me the right tools with surgical precision. My mom, in her elegance holiday garb and the onset of her dementia, stood proudly beside me, pointing down at my prone body on the floor, telling everyone, “that’s my girl.” Difference was, though, that getting up from the floor now takes longer, requires assistance and is more painful than it used to be.

But with the paint, brushes and rollers bought, I moved on to the rest of the list: old utilities to be turned off, new utilities to be signed for (new companies in a new county), phone and ISP changes to be ordered. The old apartment is packed; a clean-up crew removed the trash and discarded furniture (goodbye Futon!). The movers — everyone involved agreed we are past the point of moving ourselves — are scheduled to shift the balance over the county line in just a few days.

All this accomplished while Jesse was in Buffalo, en route to Cleveland then back to Buffalo, comforted to know I did the job he asked of me quickly, efficiently, precisely, and all he has to do is paint (he’s a former store display designer) and decide where to plug in his laptop.

I now had the bonus, the gift of time in the best of company. B, my old friend Jean (at left), and I grew up together, three houses in a row, three friends since baby-hood. Spiced with addition of new friends who have entered our circle. I brought a pork roast to B’s, and went to work on the meal I am noted for: roast pork infused with fresh crushed garlic, and oven-browned garlic potatoes. Bill made the perfect stuffed peppers for the vegetarians in our group. 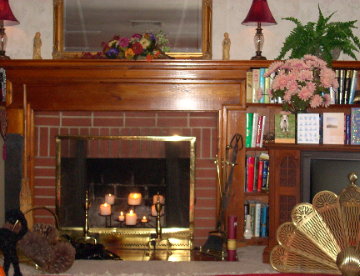 We spent an evening settled into wild conversation, exuberant laughter, bits and pieces of nostalgia, and our favorite music, all playing out in a living room I all but grew up in, with a bookcase-framed fireplace that my dad helped B’s dad build too many years ago to count. Too warm for a fire; candles were a great substitute.

I’m already home again, before the real move happens later this week; I am back in the warmer climate of Tennessee, missing the slushy frost I’ve been scraping off windshields here each morning, missing the pile of frost-crisped harvested apples at the edge of the drive, missing the icy bit of west frosty grass on my bare feet when I photographed the piles of deer-bait: mushy apples fermenting at the base of tree.

But the strands of the web I have woven will play out, linking people and places in a way that benefit all of us. For our network is small, growing smaller, and the people we can count on most are these friends who are, in truth, family. Not blood family, because that can sometimes be over-rated. We are family of the heart.