Halloween and “Fight or Flight” response 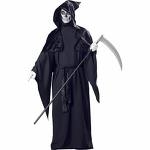 Trick-or-treating at my friend Heidi’s house featured tall husband Lonnie dressed as the grim reaper, standing by the grave display in their yard. He stood perfectly still until someone approached and then with a slowly sweeping hand he pointed the way to the candy bowl. People down the block were eyeing him, and worried about him, long before they got to the house.

Some trick-or-treaters just plain avoided the house. One boy decided to hit the grim reaper, and hit and hit and hit him. The mother was ashamed, but as Heidi remarked to me, it is interesting to see what reactions kids have to being scared.

Fight or flight: that’s how we react. Some run, some hit. Freezing, playing possum is a form of flight.

This fight-or-flight response, also called hyperarousal or acute stress response, was first described by Walter Cannon in 1915. His theory states that animals react to threats “with a general discharge of the sympathetic nervous system, priming the animal for fighting or fleeing.” [Wikipedia, Fight or Flight] 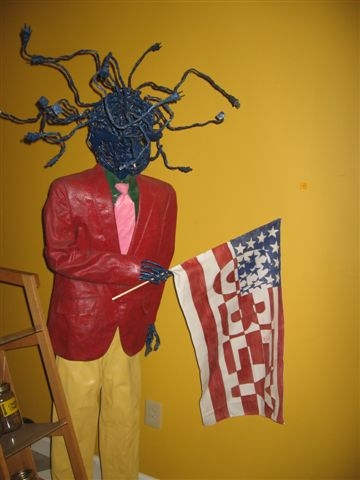 Say hello to Bob. I made him. His long name is Evolution of Medusa. Medusa is the woman of Greek myth with hair of snakes; if you take one look at her you turn to stone. Bob also has hair of snakes. His snakes are made out of extension cords with the plugs aiming outward, waving through the air looking for a place to “plug in”. He’s looking for juice.

Fear. It’s his food. Fear has a lot of energy in it. Just remember a time that you were really scared. It was hard to turn it off, right? I remember as a teen watching a Twilight Zone in the back room of our house. You may remember this one: aboard a ship they kept hearing a banging noise coming from the water below them. It was the ghosts in a sunken ship under them banging on the shell of their ship. I was so freaked out when I walked through my house, turning on lights as I went, that I was hallucinating images of the ghosts. I have not been a real fan of horror movies since, although The Shining and Poltergeist are movies I thoroughly respect.

People crave being scared. It’s an overwhelming emotion, and we’re guaranteed to feel it. Sometimes that’s a rush after not feeling much in our everyday world. There is a lot of energy in fear. Enough to make me hallucinate. Enough to cause people to take flight or fight. Notice there is more energy in it than say, boredom, enthusiasm and anger. What is the emotion that gets us to take movement out of fear?

Think about what you did when you found a nasty spider in your bathtub. Did you calmly pick it up and walk it outside? Hell no; you KILLED it. Yeah, I’m sure you justified it too, but you killed it. You were scared of it and because you are so much bigger and could find a shoe or something you killed it.

Find a boyfriend/girlfriend going out on you? Want to kill one of them? Or just slink away and kill yourself?

A child does something terribly wrong, and you smacked it. Thought later than you could have handled that better but instinctively you “killed” it. When you’re in that much anger, or rage, you do something violent that you wouldn’t normally do. The power behind it? FEAR. Fear of being squished or hurt and fear of losing control (over offspring who represent us/they are our “products” so we think). We also suffer from fear of abandonment. We are afraid that no one will like us.

A person has to be doing very well to actually admit to themselves that they have fear. A person not truly competent or confident could never admit that they have fear. A person not doing well does not ask for help with such things; a person who is able to be honest with themselves is doing much better and can sometimes seek help. Having fear and never dealing with it or confronting it, does not solve it. To survive in society we squelch it and try to look like we’ve got it all together but it will always pop up when we are intoxicated or undernourished, suffering lack of sleep or from stress. It’s always right under the surface.

Some things are too overwhelming to fight; abusive parents, alcoholic parents, abusive siblings, abusive leaders, governments, etc. Flight may be our choice. Then we deal with it later in our lives. Anger, when we allow ourselves to feel it, can get us back into the driver’s seat of our life. Besides the non-thinking energy of rage which is totally controlled by fear, there is positive anger.

ANGER IS FUEL. We feel it and we want to do something. Hit someone, break something, throw a fit, smash a fist into the wall, tell those bastards. But we are “nice” people, and what we do with our anger is stuff it, deny it, bury it, block it, hide it, lie about it, medicate it, muffle it, ignore it. We do everything but “listen” to it. Anger is meant to be acted upon. It is not meant to be acted out. Anger points the direction. We are meant to use anger as fuel to take the actions we need to move where our anger points us. With a little thought, we can usually translate the message that our anger is sending us.

Anger is not the action itself, it is action’s invitation. … anger is a “map”.

In this book, Cameron points out that our anger urges us to use creativity in our lives. Creativity is our voice. Our voice needs to be used. Sometimes our anger is saying that we could do better. It’s a call to turn off the TV and do something for our creative selves.

Fear is not bad. Anger is not bad. They are emotions that all people in bodies feel. It’s what we do with them that counts “or is interesting,” as Heidi said. Both emotions are packed with energy and we can make the choice to either squander or use them for ourselves.

Bob’s lesson: Bob is showing us that he wants to “eat” our fear, so he wants us to “be” in fear. Be in fear and get other people to be in fear. Then we will feed him and he will be very happy. Bob holds a newspaper as part of his original display. The paper is full of headlines using words that send fear messages. The advertisements tell us that buying things will make us feel good (solve our fear).

When we’re in fear, when we’re enraged, when we want to “kill” something, we need to check out who is getting a feeding out of all that fear. Is it Bob? Is it our government? Is it the people behind FOX news? Our church? Our boss? Teacher? Sure as heck, we’re not getting all that juicy energy. It’s running out of us as in an open fire hose.

We can get angry and do something about the right source. We can do something to improve ourselves or understand the situation. We don’t need to run, angry mob style, and invade a country because we are in fear of them. We don’t need to decide that all Muslims are bad and need to die, treating them like bad spiders in our bathtubs. We don’t need to hate and incur violence against Mexicans because they hung an American flag in a wrong order. Messages of this kind spread on the internet. Democrats and Republicans are not our targets. We need both of them. We are a country divided swinging around a baseball bat at wrong targets. Who’s getting the benefit of us spewing fear and hate? Who’s eating U.S.?