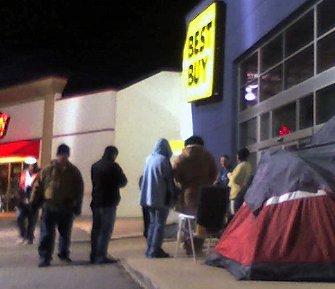 For some Clarksville residents, Black Friday started as early as 2 p.m. Thursday, Thanksgiving Day, when they began to queue up at Best Buy. By 8 p.m., lines of bargain shoppers were forming at a number of selected stores — generally electronics stores — around the city.

Cold weather dipping below the freezing mark did not deter these hardy shoppers, many of whom spent the earlier portion of Thanksgiving Day browsing the inch-thick stack of store sale flyers in the daily paper, scoping out the biggest, best sales. Many are motivated by expected “early bird” gifts and extra discounts offered to the first group of people in the store.

Electronics — everything from Digital High Definition televisions to computers or cameras seemed to be the gift of choice, as evidenced by the stores with the earliest arrivals and longest lines.

The National Retail Federation forecasts a 4 percent increase in sales to $475 billion, which marks the  slowest growth in five year. Retails sales have been disappointing as Americans facing higher health and fuel costs, a housing downturn and other economic pressures,  have cut back their spending habits. Some analysts are predicting a 2% growth in sales, numbers that would not bode well for retailers. The extra week of shopping between Thanksgiving and Christmas is no guarantee that the level of spending will be sustained after the Black Friday surge.

By 2 a.m., the line at Best Buy numbered several hundred, including people camped in tents, taking a nap in sleeping bags, and sitting in lawn chairs, waiting. The line snaked across the front of the building and around the side.

At Circuit City, roughly 100 people were gathered by about 2 a.m. , with some 100 people sleeping on the ground, again the earliest arrivals tagging a place at the front door by 8 p.m. on Thanksgiving. 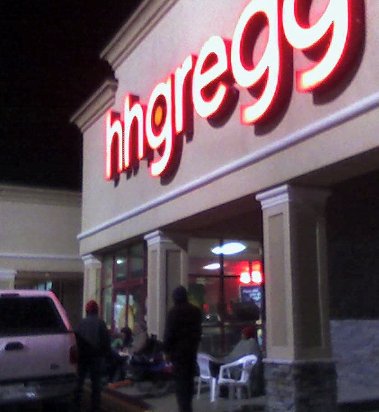 A sparse group of five were in line at Toys are Us at 2 a.m., having already been there for three hours. At 2 a.m., H.H. Gregg had a gathering of 10-15 people wrapped in blankets and seated in lawn chairs, having already secured their place in line six hours before. Twenty people gathered at J.C. Penney’s and the Governors Square Mall entrance for an advertised 4 a.m. opening, again huddled on the cold ground.

There were no lines at WalMart or the any shops at the K-Mart shopping center.

Store managers said they expected approximately 1,000 early bird shoppers when they opened their doors, some as early as 4 a.m.

Facebook
Twitter
Pinterest
Email
Print
Previous articleLitter: Not just by the side of the road
Next articleDirector David Earnhardt brings UnCounted to Clarksville with panel on e-voting