Stephen King: Monsters in ‘The Mist’

Stephen King’s The Mist not just a pretty darned good “creature feature,” its monsters erupt on several levels around us, within us and within the people around us.

Now let me say that I am not the greatest Stephen King fan; I like about half of the books he writes and little more than half the films made from said books. And no, I did not read the 1980 novella (from Skeleton Crew) upon which this latest film is based. I tend to like my horror to unfold in my mind, offstage, behind the curtain. Alfred Hitchcock mastered that in films like The Birds. That said, as thriller/horror/monster movies goes, this was a good one, even if I did have to look away in mere anticipation of those bloodier parts.

Set in Maine, the story, directed by Frank Darabont, unfolds innocuously enough with a fairly violent but seemingly natural storm that fells tree, cuts power and sends an old tree through the picture window of our protagonist’s home. Assessing the damage, the family sees the beginning of a mist rolling down from the mountains where a military base is secluded. Artist/husband David Drayton (Thomas Jane) leaves his wife at home and takes his young son Billy (Nathan Gamble) to town for groceries and supplies in the aftermath of the storm. As he heads out to the store, truckloads of soldiers go speeding past in the opposite direction, a hint of things to come.

As David shops, the mist (what downeast’erners call a “pea soup fog”) begins to envelop the town; a bleeding man runs into the Food House grocery screaming “there’s something in the mist”and the suspense begins to build, with earth-shaking thumping and pulsing, bulging doors reminiscent of The Haunting of Hill House and the creepy crawly symmetry of John Carpenter’s 1980 flick, The Fog. 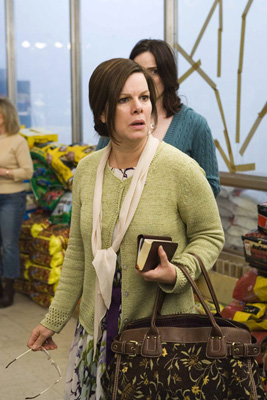 Barricaded in the store is a cross section of the populace, including a tremendous performance by Marcia Gay Hardin (right) as Mrs. Carmody, a foul-mouthed intolerant woman who believes herself to be Christianity’s conduit to God as she preaches the “Rapture,” the Book of Revelations and human sacrifice. She’s over the top, a monster of the human kind.

As David and a few men check out the store, they open the back door to a sea of tentacles that grab a hapless bag boy and drag him into the mist. It’s the first of the gory sequences and admittedly, I am not big on “gore”. I am big on well designed monsters, though, and this was a pretty good one.

Those who have witnessed the horror face disbelief from the rest of the trapped, until a sea of oversized insects are attracted to the light and come crashing at the store windows. Armed with blazing mops, knives, and a single handgun with a few bullets, the war begins. 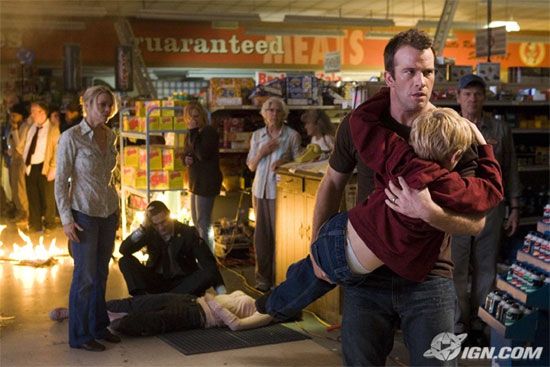 It’s a war rooted in fear of the known and that uncertain “unknown” that slowly divides the captives into two camps that could be described as the believers and the heathens, the saved and the unsaved, the sane and the insane, the intelligent and the… well, you get the idea. Gradually the horror presses the distraught throng into Mrs. Carmody’s camp, with a smaller, rational band of survivors plotting for their own survival against monsters both human and non. An unexpectedly wonderful role is that of seemingly innocuous store manager Ollie (Toby Jones) as an emerging hero.

The Mist runs on several threads. The unknown monster thread makes us wonder: is it alien, earth bound mutation, a product of technology or nuclear experimentation gone awry, or something more? The unexpected monster theme is the fear within us, the fear that erupts when our cultural norms are removed, when our reality shifts, when our assumption of safety is eliminated, when our survival is threatened. When a character walks into the mist one might hear a scream, but one might also hear — nothing, and that is all the more frightening.

King is at his best exploring the subject of fear: what taps into that visceral fight or flight response, and how do we adjust that response when it also affects the people we love? How much are we willing to sacrifice because we love?

There is a visual delineation between the The Mist‘s human realm and the world of monsters. The store interior is ablaze with light and color, all the hallmarks of advertising. The mist, and all the action involving the mist unfolds in hauntingly appropriate grayscale — even the creatures are grayscale, shades or black and white oozing into each other, blood notwithstanding.

The absolute mundane atmosphere of a grocery store (an Anywhere, USA market) setting, something so un-extraordinary, something so normal, becomes the center of a distorted universe. Something as ordinary as a floor mop, duct tape, cooking knives and a flame-thrower made from hairspray and a lighter are as sophisticated as the protection and the weaponry gets. 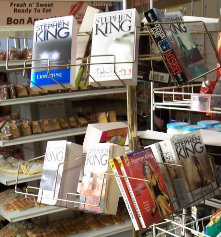 Yes, the film has its gory moments (quite a few of them), and it is not for the squeamish. But it also showcases what Stephen King does best: it studies people, and how they interact with each other and the unexpected. It is a survival story, and the actual monsters are the least of the problems.

King also gets his now expected cameo in this film via a rack of his paperback books at the end of the pastry aisle, and a quick reference to Castle Rock films on the back wall of the market.

As I watched the story unfold, I couldn’t help but think of Rod Serling’s Twilight Zone episode, The Monsters Are Due On Maple Street, in which the greatest threat to survival was humankind’s own fear and desperation. I thought of movies like the Haunting of Hill House and other classics that fueled the imaginations of movie fans of King’s generation (which is my generation) at Saturday matinees, drive-in theaters and late night TV in glorious black and white.

Though my companions and I either disagreed or voiced more or less enthusiasm on various aspects of the film, I liked the film. I liked the fact that it moved at a fairly steady if almost slow pace, but a pace that allowed its this horrific unknown to envelop us. I am a big fan of films that do NOT beat me over the head with rapid fire action and noise, films that save it up and make it count. I like the build-up. I found the ending (which I refuse to disclose) to be truly ironic and bold in a way few films dare to be. Thank you, Stephen King.