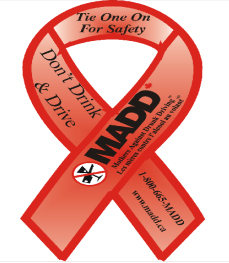 One way MADD is trying to stop drunk driving this holiday season is through their “Tie One on for Safety” campaign. According the the Leaf Chronicle (12.10.07), the Tennessee office of MADD is distributing over 10,000 red ribbons state-wide to raise drunk driving awareness. According to the article, the red ribbon campaign has three stated goals

Goals one and two appear redundant, but that is beside the point. The article does not explain how the display of red ribbons assists in accomplishing the campaigns stated goals.

MADD is a very effective lobbyist group and has helped many states to pass very effective laws to deter drunk driving, especially with repeat offenders. However I am lost on how distributing 10,000 pieces of ribbon for people to put on their cars as “a pledge to drive safe” is a worthwhile effort to reduce drunk driving.

I could only think of one way a ribbon tied to to a MADD supporters car would stop someone from drunk driving –a drunk or soon to be drunk person sees the ribbon on the car, the person knows what the ribbon stands for, and decide not to drive drunk. First, the car and ribbon must be located in a place where drunks or soon to be drunks can see it. Secondly, they must remember (in a drunken state) that the ribbon is reminding them to not drink and drive. And thirdly, the drunk driver must not drive because of the red ribbon. This does not sound like an effective way to deter drunk driving.

These 10,000 ribbon, the transportation for MADD representatives to travel the state for photo ops, the costs of the travel including hotel rooms, meals, gas, etc. is paid for through public donations. MADD’s website it states that “Your donation is used to help fund programs that save lives and prevent injuries every day across our country.” Any reasonable person would have to admit that this red ribbon program has a slim chance to “save lives and prevent injury”.

The red ribbon campaign does raise awareness of drunk driving by getting media attention; the Chronicle’s article seems to be a fluff piece to do just that. The campaign got front page ink; almost 80% of article’ space was devoted to headlines and photo ops. But the article did not give the reader any useful information that actual could reduce drunk driving incidents.

With very little effort, and not using the MADD website, I quickly found the following information.

The May 2000 issue of the Journal of the American Medical Association (JAMA) contains an article discussing a study of drunk driving crashes. I narrowed the information presented here to children, since they are “mothers” against drunk driving. This study found the following:

The first stat shows that more children are killed in drunk driving wrecks by THEIR driver than a drunk stranger. I think one can assume that children are mainly driven around by their parents or relatives. The latter two facts indicate that we could “save lives and prevent injury” by simply ensuring our children are properly restrained in a vehicle.

Benjamin Radford, author of the book Media Mythmakers – how journalists, activists and advertisers mislead us, “child advocates don’t like to hear (these statistics) because it holds a mirror up to the real perpetrators of the crime.” These facts point to drunk driving parents/relatives that do not properly secure in cars as the main killer of children in drunk driving related car wrecks. Not the partying frat boy, not the underage drinking high school student, and not the scary alcoholic at the end the bar, but someone that knows and loves the child that gets killed. What is the old saying, not to point a finger cause there are three fingers pointing back at you. The distribution of this information and public action on this information could potentially cut the number of children fatalities in drunk driving accidents in half.

Again, I am not anti-MADD; they have done a lot to help keep drunk drivers off the streets. I am against this idea that people can change the world through empty actions. The people that tie these ribbons on their cars and think they are helping, when they are doing nothing. Action is non-action as Orwell might say. Our efforts should not be to just raise awareness or raise money, but provide the public the tools and knowledge to eliminate the cause, drunk driving.