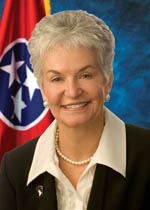 State Senator Rosalind Kurita, Speaker Pro Tempore of the Tennessee Senate, is looking for change in how Tennessee finds its Lieutenant Governor and Secretary of State.

“It is time to change history and open up statewide elected positions in Tennessee — as in almost every other state in these United States of America. As we begin 2008, we need to create a position for a popularly elected Lieutenant Governor in Tennessee. We also need to popularly elect the Secretary of State.”

Kurita, in making this bid for new elected positions rather than the tradition of appointees to those key posts, said most Tennesseans “do not even realize that we do not have any voice in the selection of powerful statewide offices.”

“During this past legislative session, I passed the first leg of this complicated process in the Senate. Now we must pass it in the House.”

Kurita is now seeking support for this measure from the public, the voters into whose hands she would place the decisions on these important posts. “Your help is crucial to moving us forward in making “the election” process more open,” Kurita said.

“Tennessee is one of only four states in the country where the public does NOT have a vote in the selection of these offices. So what does this mean? It means that, if the Governor were to become incapacitated temporarily or should die in office, the successor could be someone who was not elected statewide by the people of Tennessee.”

According to current law, the succession would fall first to the Speaker of the Senate (elected in his or her district only), then the Speaker of the House (elected in his or her house district only). Acceptance of the the gubernatorial role would require an immediate forced resignation from their speakership and the general assembly. The next in line of succession is the Secretary of State, who does not hold the statutory authority to decline the position and would have to accept the governorship.

In Tennessee, the Secretary of State is “selected” by the members of the House and Senate, not elected by the public. Instead of standing for statewide election, they are nominated by a person in the General Assembly and chosen in the House chamber. There is no general election process. No running for office. Only insiders need apply.

“Thank you for helping us to change from the past, where power was held close –to the future, where we really are all equal.“