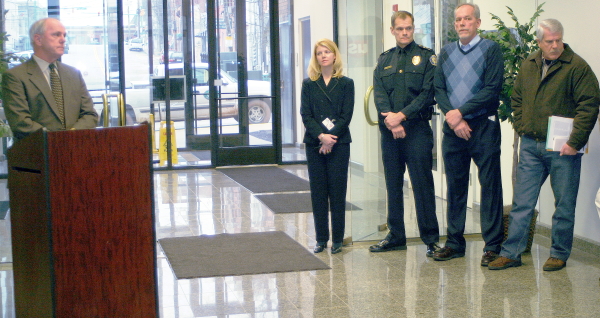 Mayor Johnny Piper announced today, that Clarksville Gas & Water’s Downtown service center at City Hall, would be closing on March 14th as part of a reorganization of the cities’ revenue generating departments. Once freed up, that space will be used to expand the existing finance department payment center, and to house the city court clerks. All of the clerks would be cross trained for both jobs, and be able to handle tasks for either department.

This according to Chief Ansley would “free up much needed space” occupied by the City Court Clerks at the police station  for use by the police department. Mayor Piper said that this is intended to help make the concerned departments “Be more effective and efficient.” He added that it would not affect the services provided to citizens at city hall, as they will still be able to pay their gas and water bills at city hall in the U. S. Bank, across from the current location.

During the same press conference Mayor Piper also announced the city would also be hiring three temporary employees to help process the backlog of parking tickets and city court fines.