Have you attended a Tennessee senate committee hearing in Nashville? On April 2 Clarksvillian’s Faith Robinson, Nicole Donnelly, Debbie Boen and I went to several of these meetings. This was a Conservation Lobby Day and dozens of environmental supporters from around the state attended. Our main focus was to support ending mountain top removal coal mining and reenacting bottle deposits which encourage recycling.

We felt pretty helpless and uncounted in our seats watching the hearings since neither bill we supported was even voted on in committee. However, we could tell that phone calls and emails to Senators and Representatives really have an impact on what happens in session.

While visiting our Clarksville Senator co-sponsoring this bill, Rosalind Kurita, she reminded us that Senators and Representatives have a rough and winding road to get bills passed – enduring frequent delays and other obstacles. Experience is critical to getting things done within this system. Senator Kurita was enthusiastic when she told us about her role on the Governor’s new task force to develop a Tennessee Comprehensive Energy Policy.

We also met with our Representative, Joe Pitts. “How are our issues doing?” asked Rep. Pitts as he took time out of his busy schedule to say hello and take a picture with Rossview High School students, Faith Robinson and Nicole Donnelly. 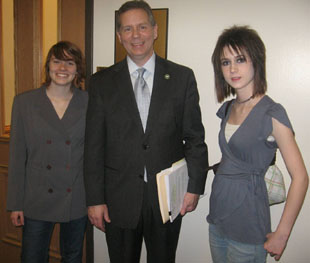 This bill prohibits the department of environment and conservation from issuing permits related to surface mining until a new programmatic environmental impact statement (EIS) addressing direct and indirect site specific and cumulative impacts is completed and a record of decision is published in the Federal Register by the office of surface mining.

The Senate committee did not vote on 4/2/08 and re-scheduled the hearing for 4/9/08. Unfortunately, a House subcommittee voted to kill the bill and adjourned for the year. Therefore, this bill cannot be passed this year. However, let the Senators know your views because it will probably resurface next year.

As far as the action in the House, here are the votes for and against the bill. Legislators voting for the bill were Reps. Frank Buck, D-Dowelltown; Brenda Gilmore, D-Nashville; and Mike Kernell, D-Memphis.

Some of this information was obtained from Knoxnews.com

The Senate met to discuss the same bill.

Senator Kilby, Chair, wanted to drop this bill several times but Senator Finney and Jackson argued successfully to put the bill back on the calendar for next week. They had to force the issue. Senator Bunch wanted to delay the vote for further study about the fiscal impact.

Debbie Boen overheard Senator Kilby telling someone in the hallway after session that he tried and tried and tried to kill it, but they wouldn’t let him. That’s how it went. We heard expert testimony to the effect that there is no agency or law that determines exactly how mountain top removal will be regulated and by whom.

Please thank Senators Finney and Jackson for insisting on taking action on this bill. Thank chair Tommy Kilby and Senator Bunch for taking the issue seriously at this time. Let him know that this is a very important issue to us and Tennessee and we want the Senate to lead our state in saving our mountains.

*SB 1408 Jackson: TN Deposit Beverage Container Act of 2007 (AKA the Bottle Bill). Requires deposit beverage distributors to pay a fee to the department a fee of one-half of one cent (increasing to three cents by July 2008) per deposit container and a separate deposit of 5 cents on each beverage in a deposit container manufactured in or imported to the state.

We need a new strategy.

Numerous surveys have found that in states without a bottle bill, beverage containers can make up the single largest category of roadside litter—typically 40 to 60 percent of the total Funds generated from unclaimed deposits are earmarked for continued funding of the county litter grants program.

In addition, it allots funds to reimburse counties or any lost tax revenue under the proposed change to the “greenbelt law.” Fifty percent of what is left will go to the distributors in the same proportion as they paid deposits in the first place; and the rest will be used for related purposes, such as litter control or recycling projects