City Council votes in opposition and disregard to citizens outcry

At a Special Called Session under heavy police presence, the Clarksville City Council heard from a wide cross-section of the affected redevelopment district and concerned citizens Monday night. Attendance was estimated at over 200 people. Despite pleas for more openness and deletion of the threat of eminent domain against homeowners and property owners, the Council gave first reading approval of Resolution 96-2007-08 with a vote tally of 3 Nays against 9 Yeas. 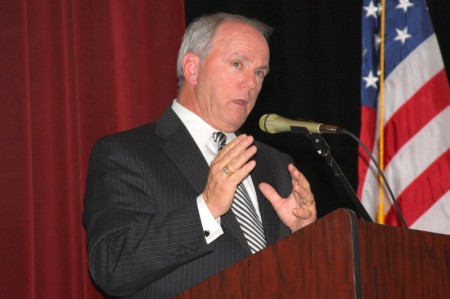 The agenda presented at the meeting deviated from that released to the public. The previously released agenda stated that the council “desires to delete Ordinance 73-2005-06 in its entirety and amend the same, or replace the same, with the hereafter Clarksville Center Redevelopment and Urban Renewal Plan.” No explanation was offered for the change-up in agenda criteria. Ordinance 96-2007-08 was listed as “an ordinance adopting the Clarksville Center Redevelopment and Urban Renewal Plan.

After motions to delete several items from the agenda, Mayor Johnny Piper gave a slide presentation summarizing the history of the Clarksville Center Redevelopment Plan. Acknowledging that the original plan had failed to follow several provisions of state law, Mayor Piper said several steps were taken to correct those flaws. However, repeal of the plan was never pursued.

Consultation with the Knoxville Community Development Corporation (KCDC) aided in revisions being incorporated into a revised plan. During the city council’s trip to Knoxville, KCDC President/CEO Alvin Nance told the council and visiting citizens that, unlike Clarksville, “Knoxville never considered declaring their entire downtown area “a blighted area or district. They utilized several individual projects encompassing varying, smaller sizes within the their downtown area in their overall redevelopment district. Additionally, Knoxville held multiple public hearings to insure public input and continued support as their redevelopment plan progressed. Also, Knoxville had very little displacement of residents in the impacted areas They made concerted efforts to insure long established neighborhoods were not destablized or suffered population make-up shift.”

After reviewing observations from the Knoxville trip, further revisions to the Clarksville Plan were presented to the public at a public hearing on March 27th. One item Mayor Piper stressed was addressing concerns of “taking of private property without full fair market value compensation.” Over 30 comment cards calling for the outright repeal of the plan were recorded as a single repeal comment in the finalized public hearing transcript. The mayor said that the March 27th public hearing on the former ordinance would be used to satisfy legal requirements for such a hearing for the newest ordinance incarnation. 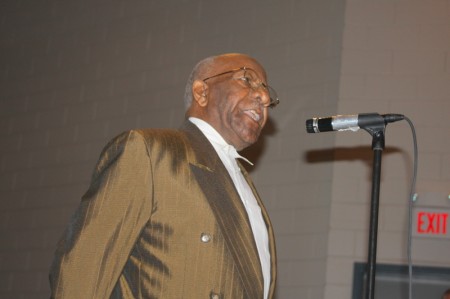 George Fort, a resident of the Red River District, called for extending the timeframe for obtaining residents understanding of the repercussions of this plan: “It isn’t there yet.” He called for a demonstration project to let the area residents see the plan’s potential impact to their community. 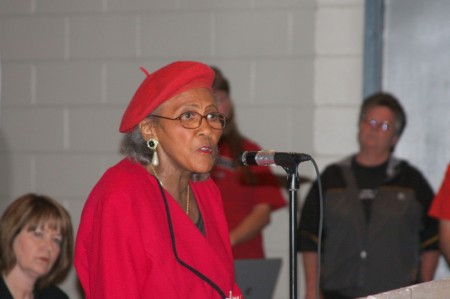 Mrs. Virgina Hatcher, president of the local chapter of the Commission On Religion and Racism (CORR), told the council that people are not pleased with this plan. “Displacing people from their homesteads of many years, or even causing them to unnecessarily fear such displacement via underhanded political manipulations, is wrong. It is unchristian,” she said. She stated she was speaking as both a resident of and for the Red River Community. She asked the council to heed the people’s discontent and reject this plan. 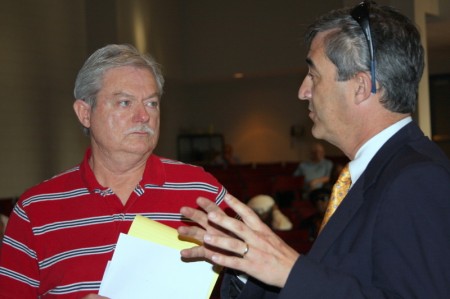 Debbie Hunt of the Property Owners Rights Coalition told the council that this whole process has denied property owners their rights and opportunity to voice objections and have their concerns heard. The abuse of eminent domain has not removed. Assurances of fair market value compensation are not quantified in this new ordinance any more than its predecessor. Assemblage clauses continue to pose a threat to homes that are not “blighted.” 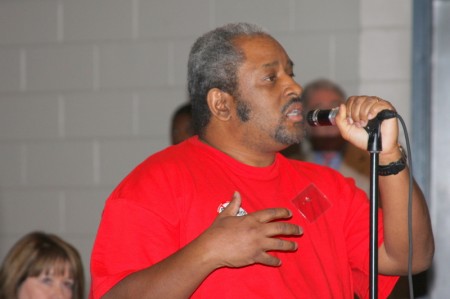 Terry McMoore (left) urged council members “to not let the ultimate puppetmaster, Mayor Johnny Piper, pull your strings. The people, the constituents, are here, and they have spoken. They do not support this plan.” He urged the councilmembers to listen to the people.

Rick Reda of Rick Reda Auto Sales at N. 2nd Street said he favors redevelopment. However, he said, this isn’t a plan. He stated the ordinance lacks any specific spelled out projects as presented in the Knoxville model. “There is no plan, but rather a bunch of rules and regulations not geared towards the residents benefit.” 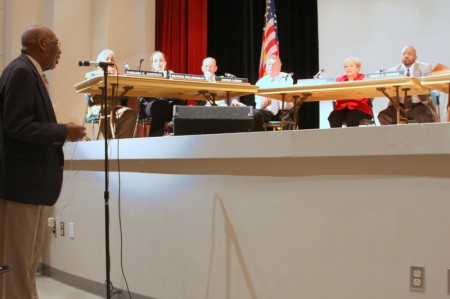 Samuel Hooker of Hooker Funeral Home, Franklin Street, questioned the wisdom of having paid a $10,000 county tax bill, having a pending city tax bill bill in June, and still be facing city condemnation of his property due to wanton acts of vandalism, under threat of eminent domain. He stated he had already been approached with offers of $750,000 for his business property, but he’s not interested in selling. Yet the city insists there are not already envisioned projects for the area. He asked if the city would give him that amount for his property under this plan. He doesn’t think so. Additionally, a long-time resident of Brandon Hills stated that unlike him, many of his neighbors live on fixed restrictive incomes and cannot absorb the burden of rehabilitation expenses resulting from proposed short corrective allowance timeframes under the new redevelopment plan. He pointed out that local banks are not approving home repair or rehabilitation loans in the area and no assistance has been forthcoming from the city. He urged the council to rethink this plan in its entirety. It is causing undue stress and anguish to people least able to contend with these pressures, he stated. 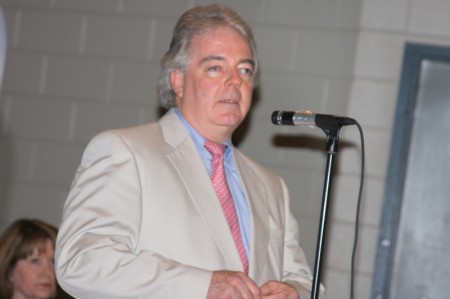 John Summers (above), Clarksville Property Owners Rights Coalition (CPRC) attorney, called the plan a blatant property grab. He characterized it as “a developer’s wet dream.” The spokesman for the Tennessee Historical Society repeated its criticism of the plan, characterizing it as a developer’s wish list. “There is no plan, no specified projects.” This plan contains the largest unrestricted application of eminent domain anywhere in the United States. “The national headquarters has called this plan audacious.”

The Council Moves to Vote

Following the public comment period, an unclarified amendment to the ordinance was approved with a vote of 10 to 2. Afterwards, several areas of concern for clarification were voiced by council members, including:

Councilman Jim Doyle, noting first that government’s highest purpose is to serve the people, reviewed the entire redevelopment plan creation process. He noted that a litany of mistakes have befallen this process and lamented that corrective steps, in support of local government actually fulfilling its duty to serve the people, have not been pursued. 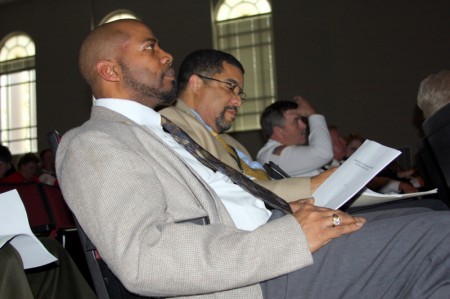 Councilman Marc Harris (above) asked for deferral of the ordinance. The motion failed, No-8, Yes-4. Following Councilman Harris’s imploring council to heed the tenets of the Gold Rule, the vote on the ordinance proceeded. The vote to approve the first reading was called and passed 9-Yes and 3-No. At this point, the meeting was adjourned.

At a community meeting meeting held Friday, April 4, sponsored by Marc Harris, residents were also concerned with language in the new ordinance that allowed only “titled property owners” be eligible for appointment to a supervisory board, a move that excludes long time neighborhood residents who are renters from having a voice in the future of their own neighborhoods. 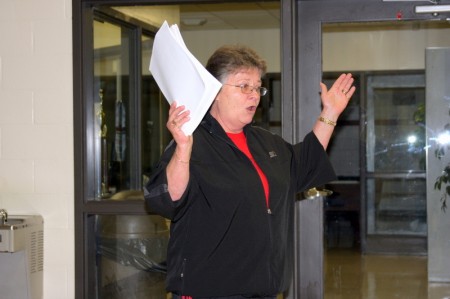 Debbie Harris (at left) also spoke at Harris’ meeting, is infuriated with the lack of response shown by the council to their constituency, voicing concerned that property around her home is being bought up by people anticipating approval of this plan and that her home will be taken under the “assemblage” clause in this ordinance. “Assemblage” was a major issue in the original ordinance, and remains a strategic part of the new plan. She was also angered by the fact that letters to property owners about the special Monday session were delivered by mail with a time frame of only 2-3 days before the first reading. It was no surprise to her that the revised document passed.