If you felt the earth shake, rattle and roll this morning, you were NOT dreaming.

At approximately 4:36 a.m this morning, a 5.4 magnitude earthquake located near Gards Point Illinois rattled buildings and caused minor damage. The quake was felt as far as the Chicago area, and even into Arkansas. The earthquake was easily felt in Clarksville, Tennessee as it was reported by multiple callers to 911, and by police officers over the public safety radio system.The quake occurred on a fault line adjacent to the New Madrid fault.

The New Madrid has been quiet for over a century, but is notorious for its devastating clusters of quakes in 1811-1812. 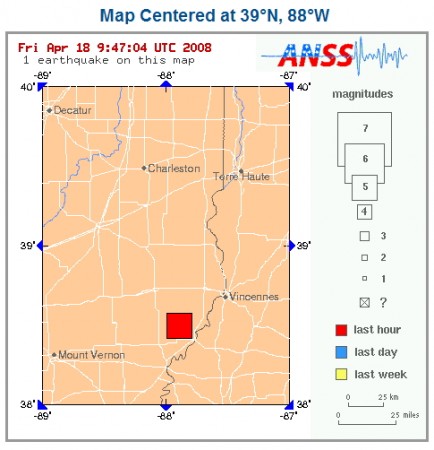 Here’s some information on the quake from the USGS Web site.

There have been 2000+ reports from people feeling the quake around the country, with a few from Clarksville.

Earthquakes are one of multiple scenarios that Clarksville area emergency preparedness officials, including the Red Cross, prepare and train for.

Here’s a little bit of history on the New Madrid seismic area:

The New Madrid Seismic Zone is made up of reactivated faults that formed when North America began to split or rift apart during the breakup of the supercontinent Rodinia in the Neoproterozoic Era (about 750 million years ago). The resulting Midcontinent Rift System failed but remained as a scar or zone of weakness. The area was then flooded by an ancient ocean, depositing layers of sediment on the rift. Since the 1970s, thousands of earthquakes have been recorded in the New Madrid seismic zone.

In 1974, instruments were installed in and around the area to monitor seismic activity. Since then, more than 4,000 earthquakes have been recorded, most of which are too small to be felt. On average, one earthquake per year is large enough to be felt in the area.

In studying maps of quake epicenters, two trends are apparent. First is the general northeast-southwest trend paralleling the trend of the Reelfoot Rift. The second is the intense cross trend (northwest to southeast) that occurs just southwest of New Madrid. This second trend coincides with an intrusive igneous body which lies deeply buried beneath the sediments of the rift zone. Several other bodies of deeply buried intrusive rock are known to exist within the seismic zone. The depths of these igneous rock bodies closely corresponds to the depth of the seismic activity.
1811/1812 earthquake series

Looking at those early 1800 quakes:
* December 16, 1811, 0815 UTC (2:15 a.m.); 7.7 magnitude; epicenter in northeast Arkansas. It caused only slight damage to man-made structures, mainly because of the sparse population in the epicentral area. However, landslides and geological changes occurred along the Mississippi River, and large localized waves were caused by fissures opening and closing below the Earth’s surface.

* February 7, 1812 (the New Madrid Earthquake), 0945 UTC (4:45 a.m.); 7.9 magnitude; epicenter near New Madrid, Missouri. New Madrid was destroyed. At St. Louis, Missouri, many houses were damaged severely, and their chimneys were thrown down. The meizoseismal area was characterized by general ground warping, ejections, fissuring, severe landslides, and caving of stream banks.

Large areas sank into the earth, fissures opened, lakes permanently drained, new lakes were formed, and forests were destroyed over an area of 150,000 acres (600 km²). Many houses at New Madrid were thrown down. “Houses, gardens, and fields were swallowed up,” one source notes. But fatalities and damage were low, because the area was sparsely settled.

The earthquakes were felt as far away as New York City and Boston, Massachusetts, where churchbells rang.

Along the Tennessee/Arkansas state line, geological features are still present almost 200 years after the events, showing the former course of the Mississippi River as it was before the 1811/1812 earthquakes.

The potential for the recurrence of large earthquakes and their impact today on densely populated cities in and around the seismic zone has generated much research devoted to understanding earthquakes. Establishing the probability for an earthquake of a given magnitude is an inexact science. By studying evidence of past quakes and closely monitoring ground motion and current earthquake activity, scientists attempt to understand their causes, recurrence rates, ground motion and disaster mitigation. This is the potential impact area of the New Madrid fault: 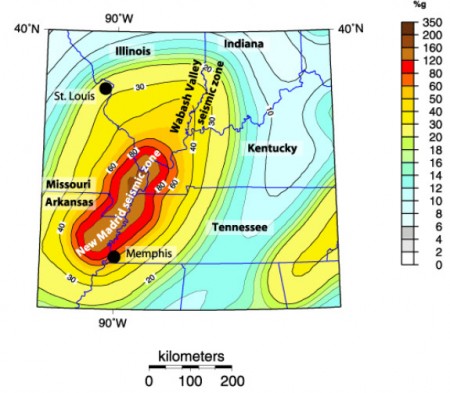 The probability of magnitude 6.0 or greater in the near future in the New Madrid fault area is considered significant; a 90% chance of such an earthquake by 2040 has been given. In the June 23, 2005, issue of the journal Nature, the odds of another 8.0 event within 50 years were estimated to be between 7 and 10 percent.

Because of the unconsolidated sediments which are a major part of the underlying geology of the Mississippi embayment, as well as the river sediments along the Mississippi and Ohio River valleys to the north and east (note the red fingers extending up these valleys in the image above), large quakes have the potential for more widespread damage than major quakes on the west coast. Additionally, the area affected will be larger since beyond the rift zone itself there are few other faults to attenuate the seismic waves.