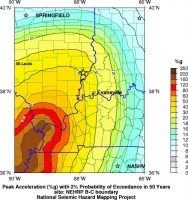 No, you’re not going crazy. There was an earthquake felt in middle Tennessee during the wee hours of the morning. An earthquake hit the Midwest today, originating 135 miles southeast of Springfield, Illinois, and merely 38 miles from Evansville, IN. At magnitude 5.4, the epicenter of the quake was 6 miles from West Salem, IL.

I was watching StarGate SG-1 when the floor shook. And it wasn’t the surround sound. I stood up as vibrations rattled the front door of the house, coming from that direction. The cats all freaked out and stared in the same unnerving direction I was staring in.

The vibrations grew, and the tremors then dissipated. By coincidence, I heard sirens going off down the road not long afterwards as I listened to the news, and checked online for any reports. Early reports to the United States Geological Survey spilled in from the IL/IN area.

The USGS data reveals that the quake was a shallow one—it’s depth only being 3 miles. Shaking went down even farther—between 7.2 to 9.3 miles. When the quake hit the epicenter at 4:36—the USGS seismographs went off in a frenzy, plotting from stations close by and stations afar. Roughly fifty-two seconds later at 4:37 a.m., the earthquake was felt here in Clarksville, TN.

The association’s Web site said that the main event was followed during each of the next two minutes by lesser 5.2 magnitude quakes, making three events total. On a magnitude 5.4 quake, the shaking is moderate to strong, creating waves that can travel for miles. Damage is usually light, so while it seems immense because of the large area the shaking was felt in, the actual damage was minimized to a localized area.

Preliminary data shows that the probability that these earthquakes will exceed recorded benchmarks in Illinois is highly unlikely for the next fifty years. Quakes in the area occur randomly on infrequent occasions. The earthquake was felt as far away as Shawnee, KS, 375 miles away.

Earthquakes in the Illinois Basin, also known as the Ozark Dome, border a greater area of seismic activity—the New Madrid fault zone. The quake was 131 miles from St. Louis, MO., which is only 70 miles west of the historic site of the New Madrid quakes responsible for the creation of Reelfoot Lake.

Of much greater risk, is the New Madrid seismic zone, an area overdue for a large tremblor. A historic map of seismic activity in the Illinois quake reveals a lot of smaller quakes that have occurred on the New Madrid Fault since 1990. These smaller earthquakes are not usually felt. In all likelihood, the activity will probably occur along the New Madrid fault line, with prominent cities like Memphis right on top of it.

It is typical of earthquakes that occur in the central U.S. and east of the Rockies that they are often felt over an area ten times as broad as those on the west coast, according to the United States Geological Survey. The largest earthquake to hit Illinois was also a magnitude 5.4 in 1968.

Now would be a good time to add earthquake insurance if you don’t have it.

Curtis Davis, a former English professor at Draughons Junior College, is a writer, artist and technical computer specialist whose passion lies in fantasy, art, graphic design, and geology. He has a BFA from Austin Peay State University, minors in Art History, and Geology, and graduate work towards a Masters in English, and Education. Davis currently lives in Clarksville.