HomeNewsWeapons of war in the hands of children
News

Weapons of war in the hands of children

As I browsed the 1000+ photos taken by Clarksville Online photographer Bill Larson at Rivers and Spires 2008, I was impressed with the event and the attendance, weather notwithstanding. Still recovering from an illness, I was unable to attend such a big event, but my eyes scanned the images — just about all of them — one by one. In the interests of fair coverage, I included several shots I personally found to be repugnant . (The children are cute; it’s the context that’s debatable).

Despite my opposition to the Iraq war and my personal distaste for the Bush administration tactics and policies, I have every respect for our military, who are doing what they promised with less than optimal help from our Washington bureaucrats. Our soldiers are the front lines; we wish them no harm and want them back, whole in body and spirit. 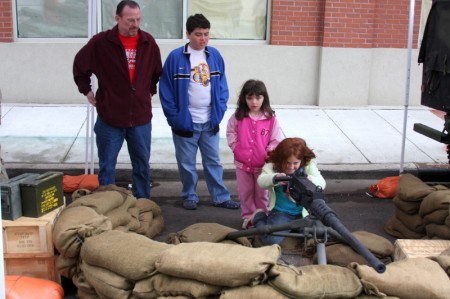 At Rivers and Spires, our troops were amply and ably represented. But it was “too much information” for some of us. I scanned a photo of sandbags, a high powered weapon of some sort (machine gun), and a young child taking aim at the crowd with parent and siblings watching. My stomach turned. Technically it was a great shot. But do we really need to be placing our children’s hands on the trigger of such a gun? Another shot, well angled, beautifully lit, shows a small child perched on a tank with the gun barrel from the turret over her shoulder. I flinched, again. Stomach lurched. I didn’t have any Pepto Bismol handy. Darn!

I called Mr. Larson, to tell him that while I would use the shots because they are part of a true and accurate depiction of what was showcased there, I found the photos offensive and disturbing. He agreed, and expressed the same reaction. I floated a query seeking reactions to the shot; the dial-a-thon and flurry of e-mails began. Apparently friends who had attended Rivers and Spires and had seen this display and the many youngsters there, had the same or greater visceral reactions to the children and the weapons of war.

We acknowledge that many children in attendance are affiliated with Fort Campbell, and many have husbands, wives, fathers, mothers or other family in Iraq. And yes, these are the tools war those soldiers use every day. And yes, children probably see a lot of that on the base — the camouflage vehicles, the choppers, the tanks or guns.

The base, the Army, the Airborne, are part of our community. And maybe such a display is warranted at such festivals, in the shadow of the eternal flame that honors the dead. But while it is one thing to see such weapons, it is another entirely to put your hands on the trigger. 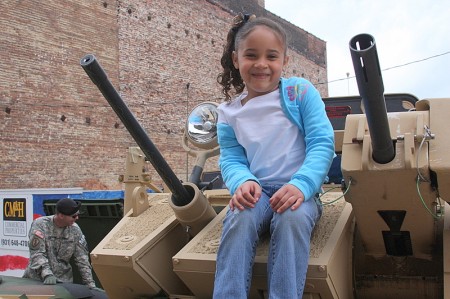 “Kit was going to throw up,” one friend said. She had to leave, couldn’t watch anymore.

Deb also felt repulsed, unsettled and had a similar reaction of disgust.

I recalled walking down the streets of Cuzco in the Peruvian Andes, where police walk the streets with automatic rifles and tanks sit outside the police department. The era of the revolutionary Shining Path made that necessary, or perhaps the memory had yet to fade to the recesses of the national consciousness. That was unsettling. I had the same reaction to the image of a tank downtown. That reaction worsened with the images of children with the weapons of war.

As the author of a “Don’t Buy War Toys” editorial for Clarksville Online, as a peace activist, an anti-war protester, a human being, a mother, and grandmother, I was repulsed. Okay, there is a war. It is real. So is murder, rape, domestic violence, animal cruelty, and host of “evils” all around us. Do we willingly and with forethought put them on display for our children? Let them hold a handgun or a stiletto blade?

Our children are already exposed at varying levels to violence, rage and war through television, film, music, video and arcade games, and gangs, to say nothing of what can happen in our schools, on our streets and even in the supposed sanctity of our churches. We try to protect our children from such things, we try to foster a healthy innocence, try to keep them from growing up to fast, to let them have some time as a child in relative innocence, so why let them handle and celebrate the tools of war as if it were a game or a celebration? 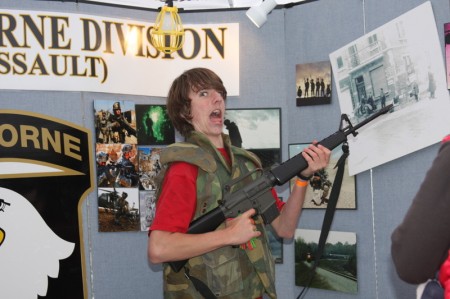 To so easily promote the acceptance of the weapons of war, especially in a festive atmosphere, by our youngest and most innocent children is irresponsible and ill-advised. With such hands on displays akin to violence, what are we really saying to our children?