HomeBusinessProperty Rights group: This is not over!
BusinessNews

Property Rights group: This is not over! 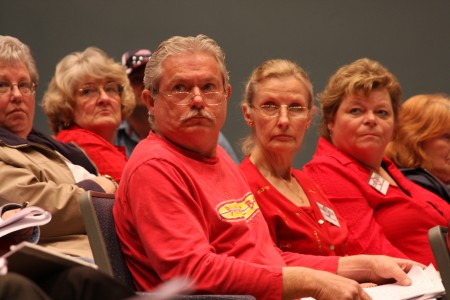 Blatantly disregarding public input and dissent, the City Council voted to approve the controversial Downtown Redevelopment and Urban Renewal ordinance, nicknamed the “blight bill,” even as disgruntled homeowners and small business owners, all members of the Clarksville Property Rights Coalition, dressed in the blood-red color of protest, looked on.

In a May 8 letter written on behalf of the CPRC, Becky McMahan first thanked “those members of the City Council who have given us the courtesy of meeting with us to discuss the Redevelopment Plan,” then presented a number of points for the council to consider the all but pre-ordained vote.

McMahan’s points were and continue to be the following:

“This issue will be played out in the city elections this November and in 2010. The public is well aware of how the residents and the property owners in the Plan area have been treated by this Administration. The CPRC is not opposed to development. We believe there are areas of Clarksville where a redevelopment plan would be appropriate. But we do not believe the current Plan before you is appropriate.

“The rights and concerns of the affected residents and property owners are being ignored. This Administration has treated the individuals who have raised concerns and objections to this Plan with disdain and contempt. The disrespect shown to these citizens and taxpayers is inexcusable conduct for an elected official.

“This issue is still too divisive for our community. More time, more effort needs to be invested to find greater consensus before a Plan of this impact and consequence for so many residents and property owners is approved.

“I urge you to put the interests of the citizens of our community ahead of those few who are promoting this Plan. This ordinance is flawed. It is not the tool needed to improve our community. We can develop a better alternative, if the community is allowed to participate in a meaningful manner.

McMahan concluded by urging councilors to not support the ordinance in its final reading.