‘The Way Home’ is storytelling set in Clarksville 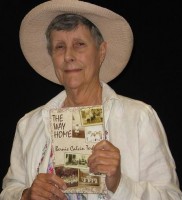 Traveling from California to be at the Clarksville Writer’s Conference and share her book The Way Home was Bernis Terhune. Bernis claims Clarksville, Tennessee, as the hometown of her heart and most, if not all, of her stories are based in Clarksville with sites like Greenwood cemetery and Tarpley’s mentioned. She talks about the ice man and his donkey in one story.

Patricia Winn describes Bernis as a born storyteller with stories that are hilarious, sensitive, imaginative, packed with unexpected situations, vivid description, and colororful eccentric characters. She says Bernis uses accurate diction of the day and experiences tell the story of a time that is fading quickly.

Bernis now lives in San Jose, CA, and worked many years as an educator helping children with special needs. She is a founding member of a playwright’s theatre in San Francisco.

With permission to reprint from the author here is an exerpt from The Way Home by Bernis Calvin Terhune:

“It’s like pickin’ fruit.” The old woman squints toward the visitor from Heavenly Rest Cemetery as her calloused feet start the rocking chair; then she gently rubs swollen knuckles trying to whiten age spots and smooth wrinkles. “Now that tree out back. Should have died. Didn’t.” A little smile. “Was already 12 years and ugly when we bought the place. Ever’body said, ‘Cut that one down. It got sumpun’. Might give it to others.’ ‘Naw,” I tole um. ‘Ain’t cutting nothing just cause it’s old and ugly.'” The old woman chuckles and squints again, this time down at her hands. Fingers push one at a time until each has four turns.

“Forty plus 12. Fifty-two years. That’s old for a apple tree. I ain’t gittin’ any younger neither. Seems like it gits harder ever’ year to stay ahead that old tree. That’s why I need to be careful when pickin’ so’s others don’t meddle and take what’s not theirs. ‘Sides, it’s bad luck to plan too far for the angel of death. He’s coming when he’s ready. Mustn’t stir him up.

“Stubborn hang-on-tight apples am the sweetest.” ….”Today’s the last pickins (of apples). It’s for neighbors. Eben for that ol’ woman across the street. Yells at my dog, and Chigger don’t eben bark back. So if you want me to sign up, maybe some other day. First there’s others like you to have a chance. Now you take this dog here. Should be in dog heaven, but she got a job to do. Scare the coons or nobody gits apples. Jist a pound dog. Chose her out of a mess of eber kind of dog. Big, little, pretty. Some show dogs eben. But it were like she already knew me. Knew old Buster had done broke my heart and I needed her. Spite her mother not knowing who her father was. And she were right. I needed exactly her.

“Just like I told you before. You come too early. It’s like pickin’ fruit, and I ain’t ripe.”

Bernis is part of a writing group where one of the members told her to write a book and she’d publish it. I haven’t seen this book in our town yet but maybe we can git it here. The small press publisher is Frog on the Moon Small Press, 7925 Rainbow Drive, Cupertino, CA 95014, 408-873-8848,

Thanks go out to the Clarksville Arts & Heritage Development Council and its Executive Director Diane Batson-Smith for putting on the Clarksville Writer’s Conference. The Conference was developed by Chairman Patricia Winn, Registrar Katie Kennedy, Banquet Chairman Jean Gilbert and Tour Chairman Minoa Ufflelman.