The project has tied up traffic, rerouted buses, and clogged streets for several months during the redesign, which included new, wider sidewalks with brick pavers, new plantings, a vintage style clock, and angled parking. The original lighting plan, which was overkill and required the wearing of sunglasses at night when it was first lit, was tampered down, with a number of the new lighting fixtures removes at the 11th hour and re-installed on a section of North Second Street. It was a wise decision, and did a lot to balance the appearance of the street. The much-discussed $100,000 custom  fountain is scheduled to be installed in November, in time for the holiday season.

Strawberry Alley is the westerly portion of the former Legion Street. Officials took the portion of Legion Street from City Hall to North Second Street, renaming it after the wife of former Clarksville Mayor James Elder, whose strawberry patch at that location was paved over as the city expanded.

In her honor, the street has its new name, which is proclaimed on attractive signs attached to each of the vintage double lantern fixture that now light the road.

WVVR FM radio and the APSU POM’s dance team were on hand, along with the band Bump City on the main stage.

Jim Durrett of the mayor’s office described the rebuilding of the street as “part of a vision” for downtown. Durrett noted that during the excavation a wall and an old building were found. Mayor Johnny Piper thanked City Councilors and the builders of the project for “a job well done” and cited the importance of creating an attractive downtown as part of the tools to market the city to new business, industry and tourism.

A wreath was laid at the site to honor the veterans, who still have a a portion of Legion Street named in their honor. 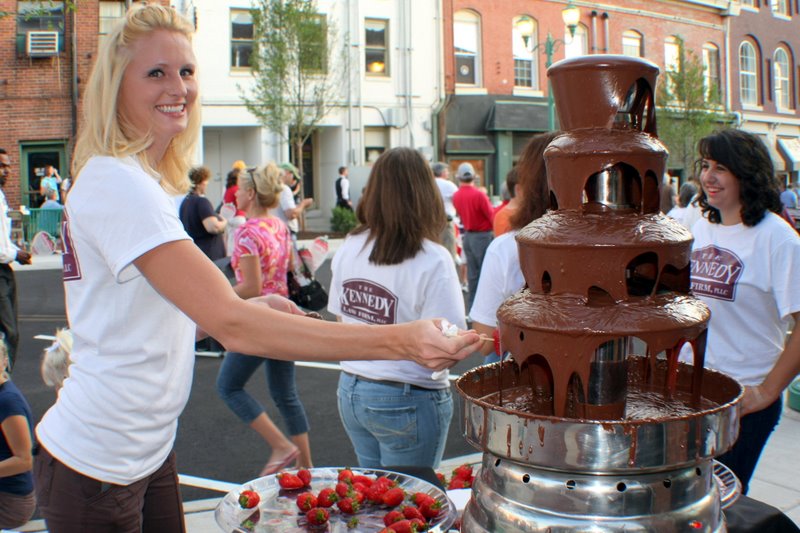 With Strawberry Alley closed to traffic, creating a pedestrian mall, local businesses set tables and chairs outside, serving customers who enjoyed the event in a refershingly cool breeze.

A costumed renactor recreated the role of Mrs. Elder, circulating through the crown with two baskets of icy cold fresh strawberries. A multi-tiered chocolate fountain spilled dark chocolate over skewered strawberries, and free strawberry sodas were served as well.

If there remains a criticism, it is that even with all the new angle parking created on Strawberry Alley, only one spot, in the middle of the new parking spaces, is designated for handicapped access. There are none on neighboring Franklin Street.

We offer you a view of the Strawberry Alley festivities: