“When the government associates one set of religious beliefs with the state and identifies nonadherents as outsiders, it encroaches upon the individual’s decision about whether and how to worship?Allowing government to be a potential mouthpiece for competing religious ideas risks the sort of division that might easily spill over into suppression of rival beliefs.” ~~ Supreme Court Justice Sandra Day O’Connor 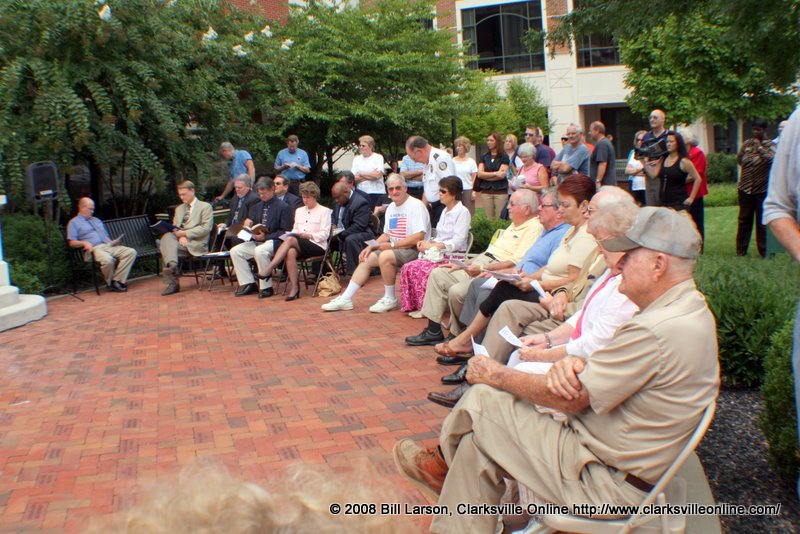 In downtown Clarksville on Thursday, September 11, congregants and legislators from varied Christian churches across the county gathered. The implied purpose of the gathering, part of a nationwide movement called Cry Out America, was to acknowledge the tragedy of September 11, 2001, an event that cost America the lives of 3,000 of its citizens on home territory, precipitated the war in Iraq and Afghanistan, which cost this country thousands of live lost or irrevocably maimed, and dug a deep hole of nearly insurmountable debt that our children will have to pay.

Thus people gathered “in the name of (their) God” to ostensibly honor the victims of 9-11, or so the advertising suggested; in fact it was a blatant effort at integrating the Christian faith into local, state and federal government, complete with out-of-context quotes by our founding fathers relating Christianity to the Constitution and the founding of the United States of America.

Cry Out America, sponsored by the national group, Awakening America Alliance, was billed as an interdenominational event, and it was; it was a gathering Christians of varying shades of Christianity. Baptists, Methodist. Presbyterians. Missionary sects. Evangelicals. Fundamentalists. All with deep and obvious roots in Christianity. It was also exclusionary of “non-Christians” who mourn 9-11 just as deeply as the Christians do. The term “interdenominational” refers to “between churches.”

Interdenominational: Interdenominational (also called transdenominational) Churches built for the purpose of bringing together Christians of different denominations are often referred to as united and uniting churches. This sometimes leads to doctrinal and stylist compromises, leading to the idea that there are “primary” and “secondary” issues in faith. Primary issues describe those about which there can be no disagreement, whereas secondary issue can be compromised upon. This is the ethos behind the Christian Union movement for instance (UCCF). Christian faith-based organizations which act independent of church oversight are called interdenominational or parachurch organizations (para, is Greek for beside, or alongside). They are typically Protestant or evangelical.

Given that 9-11 affected all Americans, religious or not, a non-denominational ceremony on this seventh anniversary of September 11 would have been more appropriate.

Cry Out America was a Christian “Praise the Lord” interdenominational prayer revival, not a true memorial service. I found that 9-11 ‘hook’ into something else to be offensive. Had this been a true non-denominational event, welcoming people of all faiths and beliefs, and those with no faith who also mourn on this day, I would have felt far more comfortable. Not because I have a problems with Christians. I don’t. Had this been held at, say, Madison Street United Methodist Church in their huge parking lot or hall, I would have found the entire thing absolutely appropriate.

Had Cry Out America been a nondenominational, more ecumenical gathering with a solemn focus on the tragedy of 9-11 and the subsequent Iraq and Afghanistan conflicts, I would have been an agreeable and willing participant on public turf. Had there been the moments of silence and silent prayer, the ringing of a church bell, the reading of names, the reading of non-denominational or universal texts, I would have been much happier.

I was raised Catholic. I am now a Unitarian. I  have a strong tendency toward and interest in Bhuddism. I can, by virtue of how I live my life, be called a Christian. I treat my neighbors as I wish to be treated. I feed the hungry, help the sick, provide shelter at times, and often give without expectation of a return — all of which is rather Christ-like, or, yes, Christian). I am also involved in the ancient Goddess culture which predates Christianity, and with Wicca. And I have spent time immersed in Native American rituals and medicine too.

Montgomery County has established a precedent by not only allowing this religious celebration to happen on county land, but supporting it by lending materials (chairs, electric power) for the comfort of participants. When I have a point to make (and my ’causes’ are universal and non-denominational) you will now find me on the courthouse steps, exercising my right to use this “public/government property” (I am one of the public, just as Christians are) to make my non-denominational case for peace, against war, or for a true commemoration service for those who have been killed or maimed on September 11 and its aftermath, and for all the soldiers of our country’s many wars. I hope they will graciously supply chairs for our attendees, who are no less American than those of Cry out America.

Cry Out America was, according to Beverly Blackard, Montgomery County coordinator for Cry Out America,  organized without the requirement of a permit or insurance fees; it was deemed by its organizers as an event for which “God opened all the doors.” Montgomery County has set a clear as crystal precedent and to deny any future group the right to assemble, no permit required, to state their case will guarantee a legal challenge.  Should any citizen use of that public space now be denied, the denial would be legally challenged.  Should a government body supporting one specific religion group via the use of public space and equipment  not provide equal access to other groups would be tacit support of a religion and a violation of church and state. Of course, I also believe that  any religious group that posts political signs, or preaches its collective politics to the pulpit by publicly endorsing specific candidates and issues, should lose their non-profit status and be taxed as a lobbying organizing.

McCreary County v. ACLU of Kentucky (2005) upheld the principle of government neutrality towards religion. Some of the strongest language came from Justice Sandra Day O’Connor’s concurrence with the 5-4 majority, in which she said:

“Those who would renegotiate the boundaries between church and state must therefore answer a difficult question: Why would we trade a system that has served us so well for one that has served others so poorly?”

“When the government associates one set of religious beliefs with the state and identifies non-adherents as outsiders, it encroaches upon the individual’s decision about whether and how to worship? Allowing government to be a potential mouthpiece for competing religious ideas risks the sort of division that might easily spill over into suppression of rival beliefs.”

Justice O’Connor’s words echo her opinion in Lynch v. Donnelly, in which she observed that state endorsement of religion “sends a message to non-adherents that they are outsiders, not full members of the political community.”

Early in his first presidential term, Jefferson declared his firm belief in the separation of church and state in a letter to the Danbury (Connecticut) Baptists:

“Believing with you that religion is a matter which lies solely between man and his God, that he owes account to none other for his faith or his worship, that the legislative powers of government reach actions only and not opinions, I contemplate with sovereign reverence that act of the whole American people which declared that their legislature should `make no law respecting an establishment of religion, or prohibiting the free exercise thereof,’ thus building a wall of separation between church and state.” ~~ Thomas Jefferson

Allowing this clearly Christian religious assembly to happen on the County Courthouse steps has set the stage for allowing assemblies of other faiths, of political or civil liberties, of peace or anti-war actions to take place on the same site with the same amenities provided by the county government. To ban or suppress other faiths or organizations from equal access under the same terms of access as Cry Out America will become an issue of discrimination.