Plunging to earth: An adrenalin rush

This is part two of a two part story on Adventure Skydiving as it happens on weekends at Outlaw Air Field. Part one ran on Tuesday, October 13. On Tuesday, Bill Larson wrote:

I have always wanted to jump out of an airplane. It was an item on my bucket list. You know, a list of things to do before you kick the proverbial bucket. So when a chance came to cross one of those items off my list by jumping out of an airplane, and then write about it, I, please pardon the pun, jumped at the opportunity…

Here is the rest of his story:

The next weekend I returned to cover Clarksville Online Editor Christine Piesyk’s first flight behind the controls of an airplane…something I would have loved to do myself — but I didn’t want to steal all of the fun. 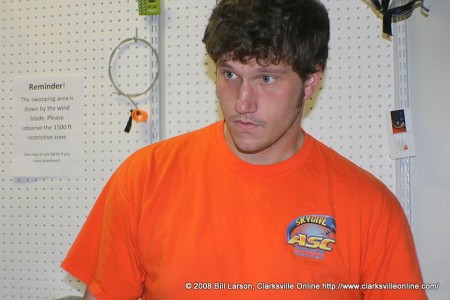 When we arrived I spoke again with Chuck of Adventure Skydiving and asked if their offer of a free jump was still open. He assured me it was. As the next flight was already full, I was added to the following flights passenger list, given a heap of paperwork, and told they would call me when it was time to suit up. We made arrangements for Christine to go up and watch me go out of the plane as well.

I went into the airport’s restaurant and began filling out the lengthy releases required by their attorneys. When finished, I returned the paperwork to the Adventure Skydiving representative. A few minutes later we proceeded outside to watch the jumpers come down on their colorful canopies

When I came back inside, my jump partner came over to me. I turned my camera over to Turner McCullough Jr., who would be photographing my jump from the ground.

The first thing you don is the harness, after loosening the leg straps my jump partner had me step inside them. Once my legs were in positioned he pulled the harness up, and like a jacket, had me put my arms inside the shoulder straps. We then fastened straps across my waist and chest. At this point, I stood as my partner made the straps good and snug. Hanging down from the waist and each shoulder were the connections where I would be connected to him. They wouldn’t hook us up together until we were in the air.

He told me we would be sitting in the plane and he would tap me when we were to stand up and move to the door. Then at the door I was to grab my harness and wait to exit the plane. Keep your hands on your harness, “Don’t grab my hands or we both die,” he said. I assured him that it wouldn’t be a problem. Then he told me that he would tap me on the shoulders three times. The first time he tapped me I was to let go of my harness and hold my arms out to my side at a 90 degree angle, and at the same time I was to bend my legs back and try to kick him in the butt. This was the free falling position. He said he would tap me on the shoulder again right before he pulled the rip cord. He said that it would feel like we accelerated then there would be a small jerk as the chute opened up. The last time he tapped me would be right before landing, when I was to put my legs straight out in front of me. He said we would land on our butts. 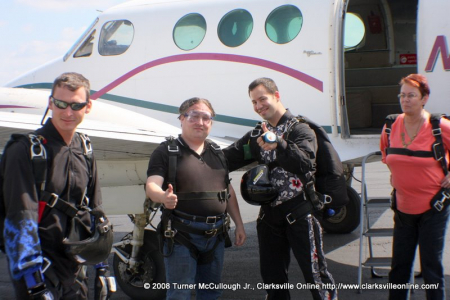 We then went outside and waited to board the airplane. With us were Editor Christine Piesyk, two members of the 101st parachute team doing some weekend jumping, and three other civilian who were also solo jumping. My partner and I were the only tandem jumpers on this flight. Last, but most certainly not the least, was our pilot.

I have long hair and foreseeing a problem I tried to position my hair in such a way that it wouldn’t be a problematic on this jump. I finally put it in a tightly wrapped bun and positioned it under the strap on my goggles. My partner said that it wouldn’t do any good but I was confident that my solution would prevent him from getting smacked by my loose hair.

We then boarded the plane. First the pilot, then my skydiving partner and myself, then the other jumpers, and then last, but certainly not least, Christine. After everyone was in and the doors were closed, the plane quickly taxied to the runway and then took off. 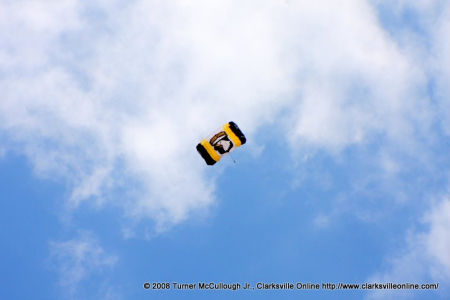 The climb up to altitude was pretty much the same as the first time I went up on the skydiving plane. As we climbed my skydiver hooked my harness to his. He checked our equipment as the other solo skydivers checked each others. It seemed like only an instant until the cries of “Door” sounded once again through the plane. When the door was opened the pilot gave his cue for the solo jumpers to exit. Again, with no hesitation, they exited the aircraft. We climbed some more and the pilot gave us our signal.

Up until this point, I was pretty much okay, a bit nervous, but nothing major. We stood and moved up to the door of the plane. Speaking from experience here, it’s scary as hell the first time you stand there looking out that door, knowing that in moments you will be jumping out through it. My editor Christine Piesyk watched me as I moved up to and went out the door. She has gleefully described my face as white as a sheet.

In an instant, we launched forward through the door. My stomach dropped like a rock, and there was a fleeting moment where my brain told my body that “we are going to die.” It was kind of like the feeling that you get when you receive the news a loved one has died, or the feeling you get right as you realize you’re having a car accident. There was an instantaneous release of endorphins. The feeling of fright seems to last forever but, in reality it only lasted for a few seconds. Then I got the first tap on my shoulders and moved my body into the free fall position.

The next thing you have to deal with was a 120mph wind blowing into your face. The sensation is as if you were breathing water, but in reality it was just lots and lots of air. This lasted for a few more seconds, then came the tap on the shoulder comes, and your parachute opens. 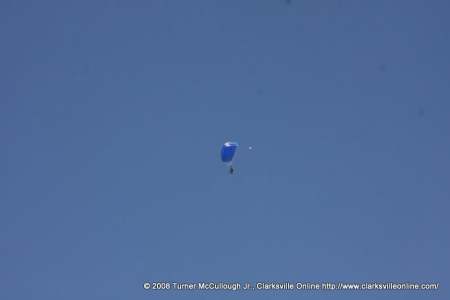 We were safe. There is nothing like the view that I had laid out before me. It’s a view known to few in the world, shared only by the birds, the sun, pilots, and my fellow skydivers. I wish I could have managed to take my camera without losing it or killing someone, because it was absolutely breathtaking. The blue sky, the green, yellow, and brown ground. You could see all of Fort Campbell in one commanding view. Below us was the entire airfield. It’s really hard to describe it and have the words be worthy of the view that we were presented with that day.

After a few minutes of gentle floating my skydiving partner asked me if I would like to try some stunts. I said sure and suddenly we were plummeting straight at the ground. Only to pull up sharply a few seconds later. We did this several times then nearing the ground swung around and started our approach to the landing area. 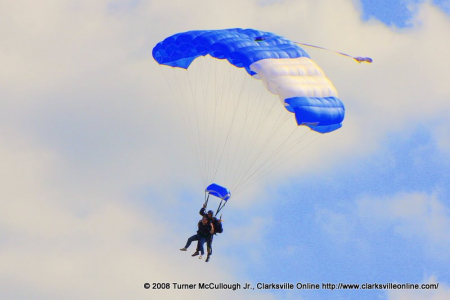 Wiht final tap, and as the ground approached, I lifted my legs as instructed on the ground before our jump. I was expecting a jar as we impacted the ground but the landing was gentle, more so than those diving turns we made as we descended. I could at last appreciate the elation of those women, who were on the plane the first time I went up with Adventure Skydiving. The adrenalin rush lasted for 3-4 hours after the jump. It’s an unforgettable experience and one I would not mind repeating.