Politics got ugly in Clarksville Saturday, October 25, as at least one McCain/Palin campaigner chose to take the low road, politicking curbside at Veteran’s Plaza Election near the Election Commission office where hundreds of people arrived to vote between 8 a.m. and noon.

One male Caucasian McCain/Palin campaigner donned an Obama Halloween mask, of and by itself not a big deal, but then attached a hand-printed cardboard “Hamas for Obama” sign perpetrating a lie and creating an implication of terrorist ties to presidential candidate Sen. Barack Obama. On the flip side of the sign are the words “Honk for Socialism NoBama.”

Debating the issues, building an case for a candidate rooted in facts, is one thing. This kind of ill-informed misinformation and dis-information starts with the word “stupid,” meanders into “childish,” and continues with “dangerous” and “malicious.” Where it ends remains a question mark. 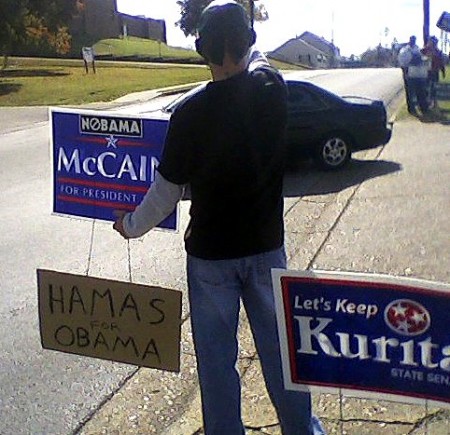 There are elements of racism, hatred and politics at a new low, in this display, and it is right here in Clarksville, Tennessee.  Election 2008 has seen levels of viciousness at the local, state and federal level that are appalling, prejudiced, intolerant and ugly.

The reference to “Hamas” is troubling, because Obama is as far removed from Hamas as an American can be.

Hamas, for those uncertain of just what it is, is defined as an organization created in 1987 by Sheikh Ahmed Yassin and Mohammad Taha of the Palestinian wing of the Muslim Brotherhood at the beginning of the First Intifada. Notorious for its numerous suicide bombings and other attacks on Israeli civilians and security forces, Hamas also runs extensive social programs and has gained popularity in Palestinian society by establishing hospitals, education systems, libraries and other services throughout the West Bank and Gaza Strip. Hamas’ charter calls for the destruction of the State of Israel and its replacement with a Palestinian Islamic state in the area that is now Israel, the West Bank, and the Gaza Strip. Hamas describes its conflict with Israel as political and not religious or antisemitic. However, its founding charter, writings, and many of its public statements reflect the influence of antisemitic conspiracy theories.

America has a lot at stake: economic and military issues compete for ranking as the crisis of the day. Instead of looking at qualifications and abilities, some are presenting incorrect information, blatant lies, as truth. And playing the race card and the terrorism card in the process. They are making judgments rooted in faith and fear, and fear of certain faiths and the color of a candidate’s skin. Never mind that Obama is a Christian  or an American.

This campaigner seemed to be having a good time with his personal little joke. Many  of us, however, are not responding with laughter. We are too disgusted. Appalled. Ashamed.