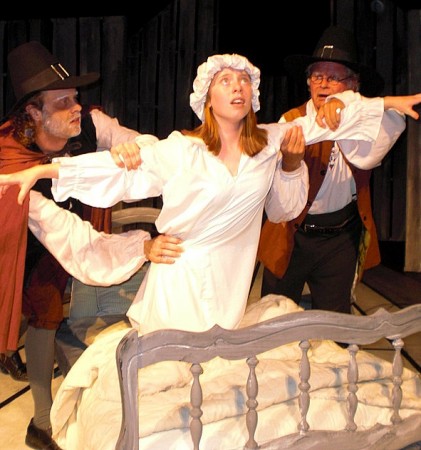 Black, white and shades of gray. Stark angular staging, flat wood beams piercing upward like stakes. The costuming, puritan black and white, faded browns and tans. The only curves, the only gentle shaping are those on the bed frame of a child in a trance.

It’s the perfect setting for this staging of The Crucible, Arthur Miller’s literary classic of God and Satan twisted around the infamous Salem Witch trials. John McDonald’s masterful hand works it magic in creating a taunt, suspenseful rendering of the mindset and fear that permeated an American colony in those early days of North American settlement.

As the story opens, we learn through conversations of alleged “occult” and “bewitching” activity in the forest, activity that young girls of the village have taken part in. Activities of witchcraft. The audience learns that these girls, including Abigail and Betty, were engaged in occultist activities — dancing naked, flying, casting spells — in the forest, lead by Tituba (Michelle Dykes), Parris’ slave from Barbados. 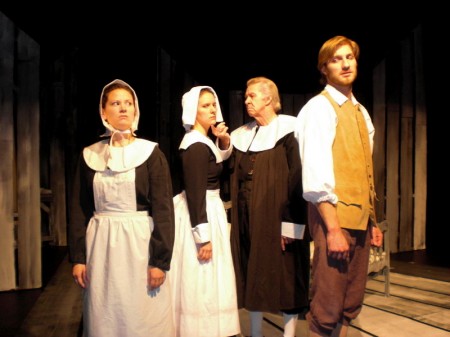 Reverend John Hale (Michael Green)  is summoned to look upon the child and investigate the incident. He intensely questions Abigail who accuses Tituba as being a witch. Tituba, afraid of being hanged, confesses faith in God and accuses others of witchcraft. Before long the court has jailed fourteen people for witchcraft. 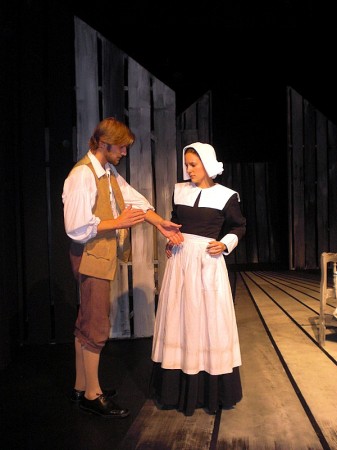 Intertwined within this series of events is a story of adultery and passion.

Maria Maloney is Abigail Williams, devious enough, harboring enough passion to be viewed as a sorceress. Maloney, a gifted addition to the Roxy, as evidenced by her prior appearances on this stage, evokes a raw passion, a volatility, that is magical to behold. As the story unfolds, she moves through emotions from fear to hope, from love to hate. She’s had an affair with John Proctor (Nathan Whitmer), another of the Roxy’s skilled cast. Over the course of the story, Proctor’s descent into despair is eloquent.

Jay Doolittle returns to the Roxy stage as Judge Danforth, the man with the power to render judgment on the witches. Doolittle is consistently impressive and in this production, he maintains his high standard of craft; the manner in which he moves his hands is as expressive as his face, punctuating his role in the story. Doolittle also edited this version of the play.

The Crucible is a play based on the actual events in 1692, that led to the Salem Witch Trials, a series of hearings before local magistrates to prosecute over 150 people accused of witchcraft in colonial Massachusetts, between February 1692 and May 1693. The play was written in the McCarthy era (early 1950s) when the US government blacklisted accused communists, reacting in much the same way as the Puritans of this story. Miller himself was questioned by the House of Representatives’ Committee on Un-American Activities in 1956.

The play was first performed on Broadway on January 22, 1953. The reviews of the first production were hostile, but a year later a new production succeeded and the play became a classic. Today, because of its status as a revolutionary work of theatre and for its allegorical relationship to testimony given before the House Committee On Un-American Activities, it is studied in high schools and universities. The Crucible is one of those plays that are part of America’s performance library, and the Roxy production is an excellent rendering of Miller’s classic.

For ticket information, call the Roxy Theatre Box office at 931-645-7699. the box office at 100 Franklin Street is open from 9-12 Monday through Friday. You can also order tickets online at www.roxyregionaltheatre.org.