“Too Many Strings” concert staged at Grace Lutheran Church 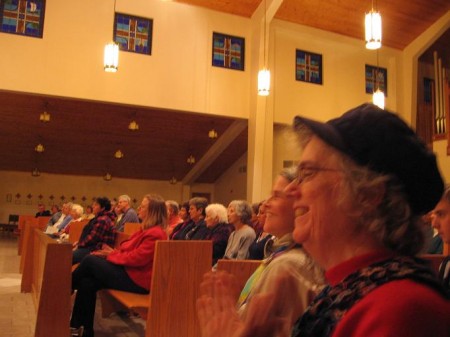 Beverly Fisher, caught up in the music

Playing and singing can be enjoyed for less than a song at Grace Lutheran’s “Music at Grace” concert series.

Beverly Fisher and I were once dubbed “local enthusiasts” by the editor of Clarksville Online and it continues to be apt, thanks to the diversity of arts to celebrate in this community. Our enthusiasm was thoroughly ignited again at the latest concert in the free series so generously provided by Grace Lutheran Church and those of us who wish to donate.

“Too Many Strings” performed“ their intertwining of Bluegrass and Celtic music” (as highlighted in the program).  Two of its members – Tom Saffell on an 8-string, 4 ½ – octave-range banjo of his own design and Travis Johnson, who maintains a joyful beat on the bodhran —  played there at March 30 with “Plaidgrass” violin virtuoso Gretchen Priest-May and her guitarist/songwriter husband, Tim May.

Tom Saffell remembered us, probably because one of their poignant airs moved me to tears.  I cried again at the November 16 concert when Travis Johnson crooned a plaintive ballad honoring his late father’s contribution to WWII called, “Those Times Will Not Come Again.”  Of course, he acknowledged its “therapeutic” value in his process of grieving for his Dad. 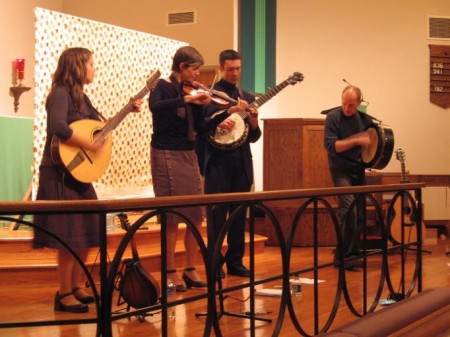 During the  performance Tom and Travis were joined by yet another fiddle virtuoso, Lynda Anderson, who moved to Nashville two years ago from the Scottish Shetland Islands.  Just as Gretchen does, she moves with her instrument as if it’s a part of her body and plays every note so impeccably that she’s a significant part of the transcendence of their music as a whole. 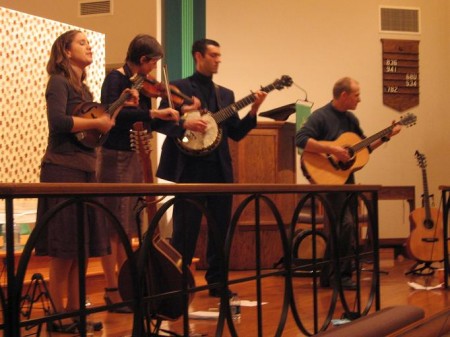 Frances Cunningham of Ashland City, endearingly gushed about her Irish bouzouki that it’s “the greatest thing ever.”  She sings and plays it with that same verve.  Its 12 strings bring the group’s grand total to 24, certainly not “Two Many Strings” for the raucously enthusiastic full church whose standing ovation prompted the rousing rendition of “Johnny, Don’t Get Drunk.”  Preceding it, Lynda stepped up to the microphone and playfully proclaimed, “In Scotland, it’s “Johnny, Get Drunk.”

If you’d like to mark your calendars for more inspirational music that could make you a “local enthusiast,” too, call Grace Lutheran at 647-6750 or just notice their marquee at 2041 Madison Street, as we did.  On January 11, they’re celebrating their “Epiphany Concert” “a Hymn Festival featuring the choir, organ and chamber orchestra . . .”  followed by Nashville Children’s Choir on February 8 with over 60 singers aged 8 –14 who have performed with Reba McEntire and the Nashville Symphony.All concerts are at 4:00 p.m., which we love, especially in waning light, so we can drive safely home.