Shape-shifting the holidays in changing lives 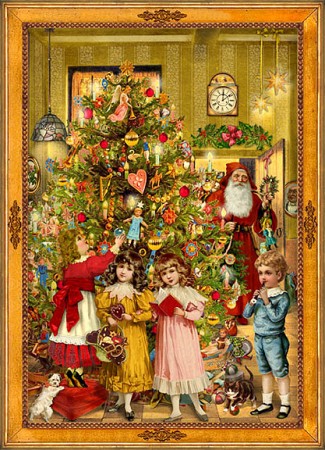 As a child, I would awake on Christmas morning, scurrying out of bed to see what treasures Santa had left under the tree. With a flurry of gift-wrapping shredded and ribbons uncurled, I opened boxes that contained clothes, puzzles, games, a slinky one year, a large raggedy doll another. Sleds, those flexible fliers with the metal runners, the crossbar and its rope “handle” that allowed the illusion of steering on the way to the bottom of a snow-covered hill.

Several years after my father left, one of my our family friends and his sons brought us a tree — a frothy thing with tiny pine cones and a strong scent of pine. It was a wonderful tree.

And in the first year I met my stepfather, we shared dinner; by morning the previous night’s storm had become a Christmas Day blizzard. I raced into the living room to see a hefty man with the stubble of a white beard, sleeping on our couch. I knew it couldn’t be Santa, but for a moment…

Those were the years of traditional Christmas celebrations.

With the birth of my child, the holiday shifted from my mother’s home to mine, and for a decade my home was the axis on which the Christmas world spun.

When my daughter married and moved away, the holiday shifted yet again, beginning with Thanksgiving. My mother and I, sometimes with my uncle, Roger, began to dine out, having selected a country inn known for its home-cooking. We’d book an early table, eat hearty, and head to the hills. literally. In the trunk were trash bags, garden shears and other instruments of “pruning.” Our “quest” to gather mountain laurel, pine boughs and acorns, alder berries, and other natural items to decorate our homes, and those of a few close friends.

We would park along country roads, and carefully snip a branch here, a branch there, and clusters of mountain laurel, which after each year’s pruning seemed to grow more abundant than ever. As the early dark of standard time brought shadows to the valley, we headed for home.

That evening, by porch light, I wound the outdoor lights around the arches of the my mother’s porch, circling the forsythia bushes, and the planters on the railings. I filled the flower boxes with a backdrop of frothy pine, the the harder, glossier deep green laurel boughs. Princess pine, a few dried caramel colorerd milkweed pods, and the bright red alder berries gave a festive look. At the front of each box was an ornament or ribbon. I wrapped the electrical connection to weather-proof (ice proof) them. Then I quietly repeated the “greening” process, without the lights, at the homes of my mom’s dearest friends and neighbors in the elderly housing vilage she lived in.

At Christmas, we would dinner, but gradually began a pattern of being with old friends who, for myriad reasons in modern civilization, were too many miles from family. The “open house” era had begun.

With my move to Kentucky, holiday celebrations evolved again. I was now the mom invited to my daughter’s home for the holidays, sitting deep into the couch, watching my grandchildren dive into a pile of presents with laughter and joy.

One year after my mother’s death, we were toasting the bread for the stuffing on mom’s tempermental white toaster. With each press of the button, the bread would begin browning — the trick, though, was that it had to be burnt. So we would press and second and time to reach the proper “blackness.” As the toaster heated up, the automatic toaster would ding and pop the bread up, out, and onto the counter, wheer it would sit until we were ready to crumble it.

Okay ma, we would say, launghing and remembering how we used to do this with my mother.

And then, in that final batch of toast, on the final charring press, the toast popped up and out, in flames, flying into the air before landing in a blazing lump on the kitchen floor. My daughter and I looked up toward the ceiling, and then at each other, and the same time said “Hi mom!/Hi Gram!” For the only time that toaster ever truly popped out the bread was when it lived in my mother’s home, on her kitchen counter.

Today I live alone: my family is split apart, the shared household of several years ago destroyed in a fire. The girls come over and help make the French meat pies, and I encourage them to, passing the recipe and the tradition down to still another generation. The original recipe, in French, circa 1880’s, survived the fire. I don’t understand why it did, but it did, and I am glad to have it.This Christmas will be an oddball holiday: the children have a new family, my daughter is coming from out-of-state, and I will be hosting a communal version of Christmas. It doesn’t have to be perfect, it simply has to “be.”

If we can laugh, tell stories, listen to music and eat our favorite foods, and be in the company of each other, we will have more than enough. The holidays are what we make them, and how we chose to celebrate them.The holidays are, most importantly, about people that I consider “families of the heart.”.