On the eve of the inauguration of the nation’s first African American president, Barack Obama, Clarksvillian’s today celebrated and honored one of the country’s foremost civil rights leaders, the late Martin Luther King Jr. 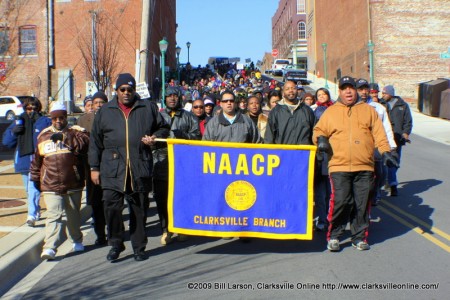 The March after leaving Public Square

Today, Martin Luther King’s fight for equality and justice was commemorated with a a parade that culminated with  formal ceremonies at Public Square in downtown Clarksville, and in front of the Criminal Justice Complex.

Martin Luther King Jr. was an African American clergyman, activist and prominent leader in the American civil rights movement. He is an icon in the history of human rights.

A Baptist minister, King became a civil rights activist early in his career, leading  the 1955 Montgomery Bus Boycott. He co-founded the Southern Christian Leadership Conference in 1957, serving as its first president. 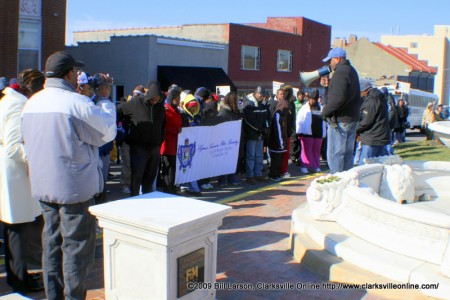 [2]King’s efforts led to the 1963 March on Washington, where King delivered his “I Have a Dream” speech, raising public consciousness of the civil rights movement and establishing himself as one of the greatest orators in U.S. history.

In 1964, King became the youngest person to receive the Nobel Peace Prize for his work to end racial segregation and racial discrimination through civil disobedience and other non-violent means. By the time of his death in 1968, he had refocused his efforts on ending poverty and opposing the Vietnam War, both from a religious perspective. 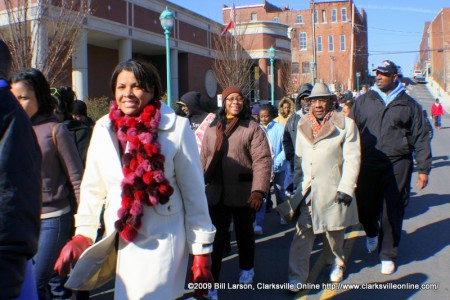 King was assassinated on April 4, 1968, in Memphis, Tennessee. He was posthumously awarded the Presidential Medal of Freedom in 1977 and Congressional Gold Medal in 2004; Martin Luther King, Jr. Day was established as a U.S. national holiday in 1986. If King were alive today, he would be 80 years old.

Sunday night, President-elect Barack Obama stood before the seated Lincoln in the (President Abraham) Lincoln Memorial in Washington D.C., fulfilling a dream as he overlooked the land where King stood when he made his famous speech “I have a dream” speech.

The dream is here, and in Clarksville, today’s celebration was a mix of our historical past and our future of change.