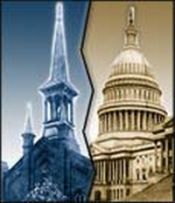 The U.S. Senate should not go along with a House plan that provides $100 million in “faith-based” funding as part of the federal economic recovery package, according to Americans United for Separation of Church and State.

Said the Rev. Barry W. Lynn, Americans United executive director, “I am disappointed that the House included funding for the so-called ‘compassion capital’ program. I hope the Senate refuses to go along with this.”

Lynn noted, however, that he is pleased with other aspects of the House’s American Recovery and Reinvestment Act of 2009.

The House stimulus bill also provides broad funding for public school renovations, he continued, but specifically forbids the use of federal money at religious schools or houses of worship.

“I think House members were sensitive to the First Amendment’s church-state separation mandate when they restricted public funds to use at public schools,” Lynn said. “I just wish they had carried that constitutional commitment forward and dropped funding for the much-abused Bush ‘faith-based’ scheme.”