NASHVILLE,  TN:  On Wednesday, February 4th Ralph Hutchinson will address a public meeting of the organizations Veterans for Peace and the Nashville Peace Coalition on Wednesday, February 4, to call on Tennesseans to join in non-violent action for peace and disarmament in Oak Ridge on April 4.

Hutchinson is the executive director of Stop the Bombs, a twenty-yearoold organization in Oak Ridge, Tennessee, which has organized a continuous presence outside of the Y-12 nuclear weapons plant calling for a complete shutdown of the nuclear facilities and thorough environmental clean up of the Oak Ridge bomb plant.  His presentation will be given on the grounds of the Nashville Peace and Justice Center at 4732 W. Longdale Drive.  The public is invited to attend this event beginning at 6pm. 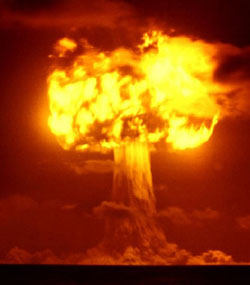 The Y12 Plant in Oak Ridge is building nuclear weapons. Specifically, Y12 is manufacturing thermonuclear secondaries for the W76 warhead—the secondary is the highly explosive part that turns an atomic bomb into a thermonuclear bomb. Y12 is the only place in the United States that makes them. Under the “Life Extension” program, Y12 is producing new bomb secondaries that will effectively make the W76-1 the first new nuclear weapon built in the United States in 20 years.

The Department of Energy has announced plans to build a new, $3 billion bomb plant at Y12 that will produce nuclear weapons for another century; a Draft Environmental Impact Statement is due to be released in April 2009 with a public hearing to follow. President Obama has embraced the vision of a world free of nuclear weapons, but he also believes in a safe, secure, reliable stockpile and a policy of nuclear deterrence. These two visions are irreconcilable.

Hutchinson says that the action at Oak Ridge on April 4th send a message, “The Change we voted for includes nuclear disarmament. The $40 billion spent every year on the US nuclear arsenal can be better spent on health care, renewable energy, housing, education, and job creation.”

Events Leading Up to Peace Rally 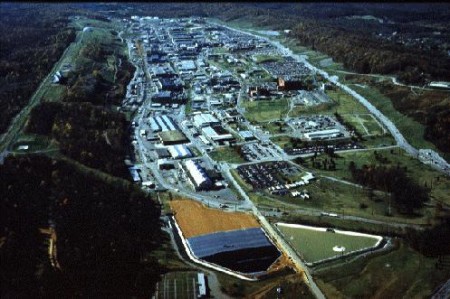 View of Oak Ridge from www.fas.org [3]