On Thursday, February 19, the Friends of Dunbar Cave along with Clean Cut Productions will present to the public a completed film on the history of Dunbar Cave and its resources. The film will screen at Dunbar Cave State Natural Area, in the Visitor Center (white building), beginning at 6 p.m. with the film repeating every 15 minutes though 7 p.m.

Over 25 people were filmed and interviewed by the Friends group, but Clean Cut is using only four of them in this short introductory film. Cathy Lee and Jason Bagget will be on hand to thank for this incredible gift to our town and state.

A few years ago Friends of Dunbar Cave made an agreement with Cathy Lee of Clean Cut Productions at Austin Peay, to make a short introductory film for the park. In exchange for a scholarship donation, Clean Cut took on the job of producing an 8 to 15 minute film about Dunbar Cave, the kind of film that someone coming to the park can watch to get an idea of the wondrous place he/she has entered onto.

For many years the Friends of Dunbar Cave support Dunbar Cave State Natural Area in ways that protect the park, educate the public and raise money for projects that help the park. They are able to help the State Park in ways that the State of Tennessee has limited spending capabilities. The Friends group rallied to keep the park a Natural area and in the hands of the State with that purpose. Under the direction of Park staff, the Friends group originated Trees to Trails and with the help of CDE they recycle Christmas trees to make the trails better.

The group originated Spring Fling, a day of free programs showing everything from hike in camping, birdhouse making, flower and bird watching, wild animals, snakes, lizard and raptor shows to canoeing on the lake. The staff at Dunbar help with several of the programs and arrange to get canoes from another park.

Two years ago the Friends brought back Cooling at the Cave, on a day in July, which invites all to come sit by the cool cave entrance, listen to music, play board and card games and drink lemonade. The group also does fundraisers to make money to help the park. For instance a donation from Wal Mart that Shirley Berardo attained went to buying professional trail map signs that are installed along the walking trails. 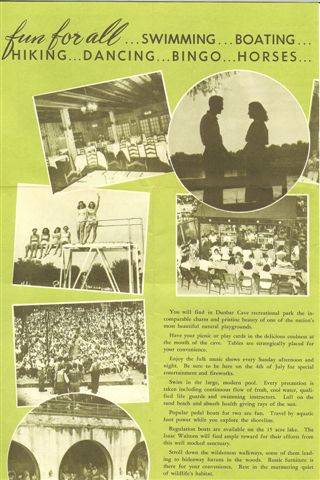 The Friends group hosts the annual Haunting History event as its major fundraiser. Skits are performed in the cave by young actors. Volunteers bring the public into the cave every 20 minutes or so to see the skits. As many as 30 volunteers plus the actors work to make it an exciting and safe event.

These events thrill the public. Thousands of people have enjoyed them through the years.

The recent carbon dating of Indian drawings inside the cave makes Dunbar Cave an even more valuable asset to our history and community. To allow the public to see the art, a better gate had to be built and the Friends helped.

Sometimes the Friends members speak at clubs and events. It’s a lot to do for a group of already incredibly busy people. When the public gets just a whiff of how exciting the history of Dunbar Cave is, the Friends group usually hear a lot of “you oughtas”. But the small group of people who make things happen somehow know they can’t take on too much and how to fit the things they do take on into their busy schedules.

The Friends work with the Park staff to make sure that everything they do is educational and pertinent to the park. One of the driving forces behind the Friends efforts is the desire to see an Interpretive Center at the park. The group has met with State of Tennessee officials on many occasions to plan and dream about an Interpretive Center for Dunbar Cave. Many times the Friends group has played an important role in assuring the State of Tennessee that they are serious about this goal, and that the history and artifacts of the park tell a fascinating story.