Montgomery County ‘s Legislative Delegation has taken an active stance in the early round of the 106th General Assembly. The four members of the delegation group have added their names to legislation being considered in the Tennessee General Assembly. Thus far the bill summary looks like this:

Rep. Curtis Johnson has sponsored four bills. HB0843: Insurance, Life – As introduced, authorizes a charitable organization to pay a commission to a person as a result of charitable gift annuity transaction under specified circumstances.

HB1909: Taxes, Excise – As introduced, creates exemption from excise and franchise tax for certain entities owned by a branch of the U.S. armed forces that derive more than half of gross income from operation of facilities on federally owned or leased property for armed forces members.

HB1910: School Transportation – As introduced, permits Montgomery County upon adoption of a resolution by two thirds of the county commission to use Type D transit buses for 15 years or for up to 17 years, if the number of miles traveled does not exceed 225,000.

He has also co-sponsored several of the same bills as Rep. Phil Johnson and additionally the following bills.

HB0576: Special License Plates – As introduced, authorizes issuance of a new specialty earmarked license plate for United Way; and allocates revenue from sale of such plates to the United Way of Tennessee.

HB0716: Handgun Permits – As introduced, allows any resident who has a valid handgun carry permit to possess a handgun while within the boundaries of any state park.

HB0921: Education – As introduced, removes restriction on commercial advertising on school buses that requires such advertising to be composed of black lettering on a white background.

HB1505: Highways, Roads and Bridges – As introduced, deletes the authority of the commissioner of finance and administration to transfer department of transportation funds and programs in the highway fund to the state general fund.

HB1698: Telecommunications – As introduced, enacts the “Market Regulation Act of 2009.”

He has co-sponsored several House Joint Resolutions along with Rep. Phil Johnson and additionally the following: HJR0150- Memorials, Government Officials – Urges governor to refuse certain funds from the American Recovery and Reinvestment Act. 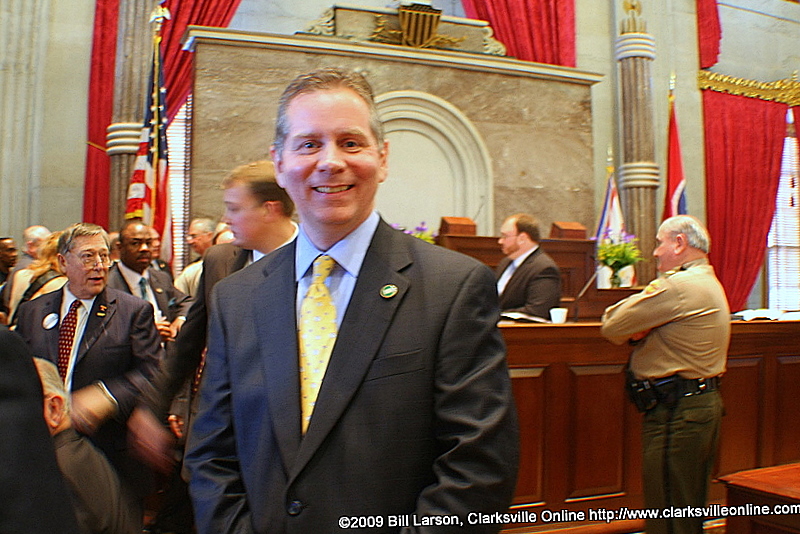 Rep. Joe Pitts has also co-sponsored several House Joint Resolutions. HJR0061: Constitutional Amendments – Adds new provision to Article I to provide that nothing in Constitution of Tennessee secures or protects right to abortion or requires the funding of an abortion except in cases involving rape, incest, or health of the mother.; HJR0170: Naming and Designating – “World Kidney Day,” March 12, 2009; HJR90177: Naming and Designating – “Kappa Alpha Psi Fraternity Day on the Hill,” March 11, 2009 and HJR0001: General Assembly – Creates the position of “Speaker Emeritus of the House of Representatives” and selects Jimmy Naifeh for the position.

Co-Sponsored Bills include: HB1898: Transportation, Dept. of – As introduced, requires TDOT to ensure share of federal stimulus funds for transportation are allocated directly to rural planning organizations in proportion to population.

HB1274: Transportation, Dept. of – As introduced, requires TDOT to ensure share of federal stimulus funds for transportation are allocated directly to rural planning organizations in proportion to population.

HB0959: Handgun Permits – As introduced, makes information contained in handgun carry permit applications and renewals, information provided to agencies to investigate applicant, and records maintained relative to the permit application confidential and creates Class A fine only misdemeanor of unauthorized publication of permit information or records.

Sponsored Bills: HB0406: Sentencing – As introduced, requires any child sexual predator, child rapist, or any person convicted of aggravated rape of a child who has a prior conviction for certain sexual offenses to be sentenced to life without the possibility of parole.

HB0408: Education, Higher – As introduced, allows a course in American government to be substituted for one of the two courses in American history required for a baccalaureate degree from a public institution of higher education.

HB0412: Motor Vehicles, Titling and Registration – As introduced, requires owner who sells or transfers motor vehicle to another to notify department of revenue within five days of sale; and provides immunity for such owner for violations of motor vehicle laws or torts committed by another’s use of the vehicle after such notification.

HB0708: Sexual Offenses – As introduced, increases the age of a child for purposes of certain sexual offenses committed against children from age 13 to age 16; requires any child sexual predator, child rapist, or any person convicted of a violation of § 39-13-531 who has a prior conviction for certain sexual offenses to be sentenced to life without the possibility of parole; requires that a defendant’s bail be at least $30,000 if the defendant is charged with a violation of a sexual offense and the victim is less than 16 years of age.

HB0709: Sexual Offenses – As introduced, requires any child sexual predator, child rapist, or any person convicted of aggravated rape of a child who has a prior conviction for certain sexual offenses to be sentenced to life without the possibility of parole.

HB0710: Tax Return Preparers – As introduced, requires that tax refund anticipation loans be made by check.

HB1197: Taxes, Sales – As introduced, abolishes sales and use taxes.

HB1198: Energy – As introduced, encourages the use of certain energy efficient technologies and products by the various departments and agencies of state government.

HB1199: Child Abuse – As introduced, increases the age the victim of child abuse or child neglect must be from six to eight years old for a defendant to receive an enhanced punishment for such an offense.

HB1200: Child Abuse – As introduced, removes jurisdiction over criminal proceedings involving the prosecution of child abuse and neglect cases and the prosecution of the failure to report such cases from juvenile court to a court of general sessions or circuit or criminal court.

HB1201: Child Abuse – As introduced, redefines the offense of child endangerment to be when a parent or custodian of a child eight years of age or less knowingly exposes such child to or knowingly fails to protect such child from abuse or neglect resulting in physical injury to the child.

HB1429: Criminal Offenses – As introduced, redefines “serious bodily injury” to include a broken bone of a child who is eight years of age or younger.

HB1900: Sexual Offenders – As introduced, removes exemptions that allow sexual offender to be temporarily on school grounds, during school hours, to attend an academic conference or school event; to drop off or pick up a child; or to make a mail, food, or other such delivery.

HB1901: Travel Regulations – As introduced, requires state mileage rate to be set by department of finance and administration in amount at least 90 percent of the standard mileage rate allowed by IRS as deduction for taxpayer’s use of automobile for business expense purpose.

HB2209: Civil Procedure – As introduced, creates a defense for actions filed to collect the balance due on certain consumer loans that the loan originator did not take into consideration the credit worthiness of the debtor when issuing such loan.

HB2212: Banks and Financial Institutions – As introduced, requires any person who makes a title pledge loan without a license and who does not return collateral and any money paid by borrower to pay interest to borrower at 10 percent per annum of amount owed.