Sen. Barnes and Rep. Pitts pass bill to make it harder for criminals to buy guns

Nashville – The Coach Willard Ross Act of 2009, sponsored by Senator Tim Barnes and Rep. Joe Pitts, has passed in the State Senate and House. Northwest High School’s beloved basketball coach was killed in 2007 by a stray bullet, fired by a man with a criminal record, who was prohibited from owning a gun.

“This legislation has been in the works since the untimely death of Coach Ross, who was my little league baseball coach” Rep. Pitts said. “We introduced this legislation after a letter from his family who wanted to give our law enforcement officers another tool to help keep guns out of the hands of criminals.”

The passage of this legislation, the Coach Willard Ross Act of 2009, is a way in which we can honor his memory and in some measure deter this type of violence.

The bill has been passed in both the Senate and the House and will go to the governor. 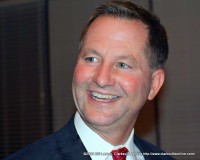