Editor’s Note: Clarksville Online apologizes for the delay in the publication of this story. 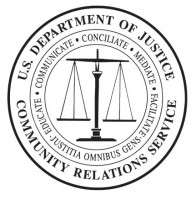 On On April 3, 2009, an exhibit commemorating the work done by the U.S. Department of Justice Community Relations Service (CRS) to reduce racial tension and violence during the civil rights movement was unveiled at the National Civil Rights Museum in Memphis, Tennessee. The exhibit features a video presentation that explains the mission of the Community Relations Service and provides a first-hand account of the challenges faced by retired staff members who mediated many of the well known marches and demonstrations of that era.

The Community Relations Service is the Department’s “peacemaker” for community conflicts and tensions arising from differences of race, color, and national origin. Created by the Civil Rights Act of 1964, CRS is the only Federal agency dedicated to assist State and local units of government, private and public organizations, and community groups with preventing and resolving racial and ethnic tensions, incidents, and civil disorders, and in restoring racial stability and harmony. 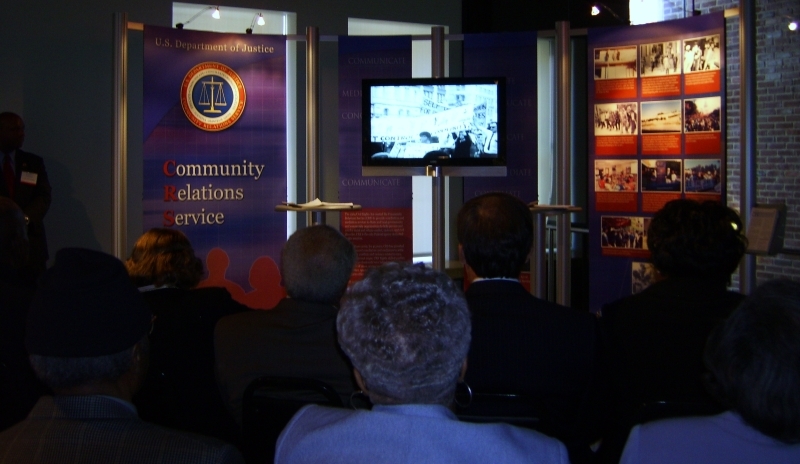 CRS facilitates the development of viable, mutual understandings and agreements as alternatives to coercion, violence, or litigation. It also assists communities in developing local mechanisms, conducting training, and other proactive measures to prevent or reduce racial/ethnic tension. CRS does not take sides among disputing parties and, in promoting the principles and ideals of non-discrimination, applies skills that allow parties to come to their own agreement. In performing this mission, CRS deploys highly skilled professional conciliators, who are able to assist people of diverse racial and cultural backgrounds.

On hand for this historical event was special guest speakers Ondray T. Harris who was recently confirmed by the United States Senate as the Director of the Community Relations Service (CRS), U.S. Department of Justice.

He gave a moving speech to the many VIP’s and invited guest in attendance including Pastor Tommy Vajellos and Terry McMoore and family from Clarksville. 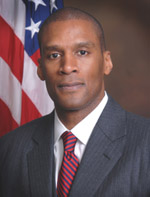 Good morning, everyone. Thank you for coming today. As you have just heard, my name is Ondray Harris, and I am the Director of the U.S. Department of Justice’s Community Relations Service — also known as CRS. It is a privilege to be here today to unveil the CRS exhibit in the museum and to pay tribute to those who paved the way for Civil Rights reform in America. This weekend marks the anniversary of a dark day in our history. Forty-one years ago, Dr. Martin Luther King, Jr. was assassinated mere steps away from this auditorium. The role that he played in advancing the Civil Rights cause cannot be overstated. Martin Luther King, Jr. lived and died for the Civil Rights cause. King’s simple appeal for equality became the great struggle for which he gave his life.

Nevertheless, Dr. King’s demands for justice and equality did not quell his desire for peace. His love for this country never faltered, even as he reminded us all of America’s unfulfilled promises to African Americans. Without cynicism, King worked to inspire change. He sought a resolution that would unite — a method that would heal. And while he did not live to see his dreams realized, I trust that he would be proud of our progress.

Today, we acknowledge the role that the Community Relations Service has played in bringing forth Dr. King’s vision for this country. Created by the Civil Rights Act of 1964, the mission of CRS was to become the “Nation’s Peacemaker,” an ambitious undertaking during a time in the 1960’s when conflicts between blacks and whites were not only real and heartbreaking — but sometimes violent. CRS is unique because we are the only Federal government agency tasked with the great responsibility of bringing racial conflict to peaceful conclusions. Therefore, CRS’s congressional mandate is just as important today as it was 45 years ago.

At the time of CRS’s creation in the 60s, “race relations” primarily referred to conflicts between “blacks and whites,” however, from the 1960’s to present day the Agency has worked with communities of ALL racial and ethnic backgrounds — to restore community stability, when such stability is threatened by violence and civil unrest. CRS trailblazers such as Ozell Sutton and Fred Crawford work tirelessly in communities across America — many times disregarding their own safety and welfare. In fact, Mr. Sutton is living history. It will service you well to take some time to talk with him and hear the stories of how there were times that he reasonably feared for his life while working in the field for CRS, for America — for you.

Today, CRS – and America – face ever-changing racial demographics and socio-economic shifts that can cause tensions in our communities. With these changes, CRS works to resolve disputes and prevent violence that often divides neighborhoods,diminishes the effectiveness of schools, and stunts the capacity of communities to reach their full potential.

Therefore, although it is important for us to reflect on African-American historic struggle and to focus today on the Civil Rights Movement, we must strive to promote peace among ALL racial groups in the United States. For the American ideas of equality to persist, we must allow the words “I have a dream…” to transcend the aspirations of any single race. We must be a nation of inclusion. A nation of tolerance. A nation of compassion. As I have stated many times before: we must endeavor to embrace each other first and foremost as Americans — steadfastly united in the concept of “the universality of freedom and equality for all people.”

In sum, as Dr. King said 46 years ago:“We cannot walk alone.” So today, I ask that each one of you assist me in this noble cause. Only if we recognize TOGETHER where we have been and acknowledge where we are now- can we reach where we want to go. As Dr. King said, “Human progress is neither automatic nor inevitable… Every step toward the goal of justice requires sacrifice, suffering, and struggle, and the tireless exertions and passionate concern of dedicated individuals.” CRS, throughout its history, has continued to lead in this effort towards racial progress and harmony. As the Director of CRS, I pledge to continue to work with communities across America in accomplishing the honorable goal – of ending race, color, and national origin conflicts.

Thank you all for coming today. Thank you.