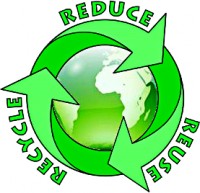 It’s almost impossible not to hear the term “Green” on a daily basis. The earthy color has become a popular buzz word due to the Global Warming debate. Green energy, green jobs, green feelings, green practices, green (fill in the blank). I say enough already! I realize it’s not hip, fashionable or trendy to cast doubt upon this massive advertising campaign that is “Green” but frankly I’m sick of hearing it. Yes, we humans have not been kind to Mother Earth. There are many things we can do to reduce our impact on this planet. But if you really think the “Green” movement is solely about saving the environment, I have about 400 square miles of land in Hawaii to sell you. It is about “Green” as in cash baby, cha ching!

It’s not that I do not believe in global warming, I simply do not believe “going green” is going to amount to a hill of beans to alter it. Because many scientists agree that the earth has been through similar cycles and altogether different climate cycles many times before and without human input (ice age…anyone?). You do not hear any opposing opinions or different takes in the media, not because there aren’t any from very qualified people to do so, but because it doesn’t tow the politically correct line. Yes “Green” is essentially a political advertising campaign. Its been such a successful one that more and more companies are picking up on it and using it to their advantage. Al Gore made a fortune on his book “An Inconvenient Truth” all the while being one of the heaviest residential users of electricity in Nashville. After all it takes a lot of lights to illuminate the Gore mansion, even when Big Al is away making it snow somewhere by his presence.

We are told that everything, including cow flatulence causes global warming. If it’s a hot summer it must be global warming. If it’s a mild winter, you guessed it, global warming. Let’s all go GREEN, whatever that really means. I will be the first to say we need to wean off of oil as quickly as possible because it’s expensive, limited and it smells, but are we so delusional to think that if we simply change a few habits or feed our cows Gas X that we will halt global warming? It’s really about money in my opinion. President Obama is proposing many new lofty environmental control laws that in the end will cost the American tax payer money and not change anything. The only result will be that government gets bigger, and the economy continues to tank and if the earth is on a warming trend, it will continue to be. As influential as we humans are, and as damaging as we can be, ultimately the earth can still kick our butts.

Chris Jackson
A Clarksville native, Chris Jackson graduated with a degree in Communications from Austin Peay State University. He has worked in both print and broadcast media in both Clarksville, TN; and the Middle Tennessee Area. He currently resides in Nashville, and serves as a recruiting and staffing coordinator for Key Rehabilitation Inc., a privately owned contract therapy company with home offices in Murfreesboro, TN.
RELATED ARTICLES
Commentary