FORT CAMPBELL – The 101st Airborne Division (Air Assault) has a new commanding general. Maj. Gen. Jeffrey J. Schloesser relinquished command to Maj. Gen. John F. Campbell at a ceremony today. Campbell came to the 101st from the Pentagon, where he served as the deputy director for regional operations, J-3, The Joint Staff, Washington, D.C. He has served in both Iraq and Afghanistan. Campbell’s former command assignments include 1st Brigade, 82nd Airborne Division, and the 504th Parachute Infantry Regiment in support of Operation Enduring Freedom. 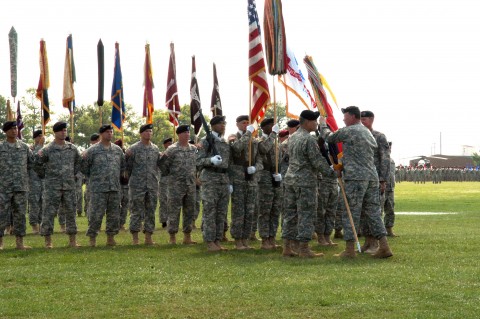 Schloesser has commanded the Screaming Eagles since 2006. During his tenure, the division deployed units to both Iraq and Afghanistan simultaneously. The division headquarters, under Schloesser’s command, also served as the headquarters for U.S. and NATO operations in Regional Command-East Afghanistan from April 2008 to June 2009.

All 101st units were represented at the ceremony, which also included a pass and review of the troops by the incoming and outgoing commanders.