Washington D.C. – Congressman Dennis Kucinich (D-OH) today spoke out forcefully against the $636 billion Defense Appropriations bill, saying it continues to fund the immoral war in Iraq while ramping up U.S. operations in Afghanistan.

“We are discussing a $636 billion appropriations bill which will fund the continuation of the wars in Iraq and Afghanistan. Congress has been gripped for months by a debate surrounding health care reform, but we will only have a brief debate about spending $636 billion dollars and the wars that money will fund. That is not enough.

“We need to have a serious debate about the wars in both Iraq and Afghanistan and the priorities of this nation. We need to discuss our options and we must immediately withdraw U.S. troops and contractors, not just combat troops, but all of our troops. It is time for this body to rethink the validity of funding military operations throughout the world when we have so many priorities that need to be addressed at home. 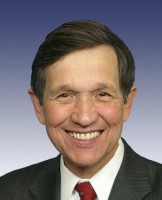 “Just today we saw a memo from Col. Timothy R. Reese, Chief, Baghdad Operations Command Advisory Team, who wrote, ‘Our combat troops are currently the victim of circular logic. We conduct operations to kill or capture violent extremists of all types to protect the Iraqi people and support the Government of Iraq. The violent extremists attack us because we are still here conducting military operations.’

“The U.S. military is unmatched. Since 2001, total U.S. defense spending has increased by nearly 80 Percent. Furthermore, we are spending more on defense than all of the other countries of the world combined. 56 percent of the entire discretionary budget for fiscal year 2010 will be used to fund the defense department.

“I do not believe that the priority this body continues to place on funding our the military industrial complex is consistent with the priorities and values of the American people. This bill includes over $600 billion in spending while only a small fraction is dedicated to non-proliferation activities. However, in December 2008 World Public Opinion found that 77 percent of Americans favor an international agreement for eliminating all nuclear weapons.