HomeCommentaryRadio Talk Shows Vs. Common Sense: The Increase in the Minimum...
Commentary

Radio Talk Shows Vs. Common Sense: The Increase in the Minimum Wage 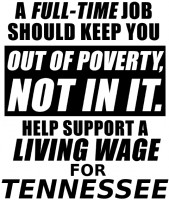 The other day on the way home from work I heard a right wing radio talk show host say the following, and I am paraphrasing:

“The minimum wage is going up 10%. Therefore, in order for businesses to maintain the same level of profits, we should expect 10% of minimum wage earners to be laid off. This increase in the minimum wage, effectively, increases unemployment, increases the number of people looking for government entitlements, which is exactly the opposite of what this economy currently needs.”

The host cut to a commercial break, and I turned the radio off to think about that statement. It just didn’t sound right to me. It sounded too black and white. Economics is rarely that simple. So I thought about it.

Let’s look at the facts. Out of the roughly 300 million Americans, 200 million are working; the bulk of the nonworking Americans are retired or children. 5 million working Americans work minimum wage jobs. So 2.5% of all workers earn the minimum wage. Two-thirds of those minimum wage employees are women. Over the past few months during this “Great Recession,” 500,000 working Americans get laid off every week. The minimum wage increased from $6.55 an hour to $7.25 on July 24, 2009; an increase of 70 cents or 10.6 percent. The majority of minimum wage workers work in the fast food industry. The National Restaurant Association states that 29 cents of every fast food dollar earned goes to wages and benefits.

Look at that last line, that 29 cents of every dollar earned in the fast food industry goes to salary and benefits. I question whether minimum wage earners are really costing the industry very much in the benefits category, but I will use the 29 cents,. If the minimum wage increases by 10%, that 29 cents number would also increase by 10%, or to 32 cents (again I rounded up to be conservative.) This minimum wage increase of 10% would cost the fast food industry an additional 3 cents for every dollar of revenue or 3%. In his book Fast Food Nation, Eric Schlosser calculates that a dollar increase in the hourly rate of fast food workers would increase the cost of a hamburger by a nickel.

The radio talk show host makes a big assumption in his statement – to compensate for the increase in the minimum wage businesses will reduce expenses (lay people off) instead of raise prices. Raising the cost of a Big Mac 3% would probably not be noticed by the customers. But a 10% reduction in labor force would be noticed by the customers, since would it presumably take longer to order and get your “fast” food. So the assumption that the increase in minimum wage would cause massive lay-offs seems unlikely.

Another fundamental flaw in the radio host statement is that he ignores that an increase in the minimum wage, puts more money in the pocket of the worker. Guess what people do with money? Spend it at businesses. At 40 hours a week at the old minimum wage, a worker gets $262.00 or $13,624.00 a year. Someone is living off the minimum wage, is probably working more than 40 hours a week, but again, I am just use the 40 hours work week for math purposes. (Interesting side note, another large employer of minimum wage workers, Wal-Mart, consider 32 hours a week full-time.) Under the increase minimum wage, they earn $290.00 a week or $15,080 annually. So the worker gets an additional $38.00 a week or $1,976.00 each year. Lets apply that increase to the roughly 5 million minimum wage workers, and assume they spend it. (With income of $15,000 a year, it seems illogically that they could actually afford to save the money.) But if 5 million workers had an extra 38.00 a week that was spent that is pumping $190 million into the economy every week or nearly $10 billion a year…and unless the wage is ever decreased, this goes on forever. In an economy that is in desperate need of people spending money, an increase in the minimum wage immediately and consistently will pump billions of dollars into businesses.

So with a little time, a little math, and little thinking, it seems t the radio host thinking is incorrect. It ignores the revenue side of the equation (laying off people vs. a minimum price increase) ind s purposefully manipulative. Using the facts laid out above, it seems that a much better supported argument could be made that the minimum wage increase is good for the economy.

The radio show host was “up against a hard break” and maybe after the top of the hour, he realized the errors of what he said, but its doubtful. Maybe his listeners, did like I did, and thought about it for a while and did a little math, again I doubt it. Or maybe I am what he calls a “Van Gogh” listener and do not find misinformation said tongue in cheek entertaining.