HomeArts/LeisureBook Review: "How We Decide" by Jonah Lehrer
Arts/Leisure

Book Review: “How We Decide” by Jonah Lehrer 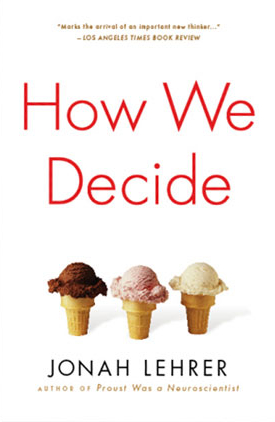 So you think you are in control and make rational decisions? Think again. Scientists have only recently started to see how the brain works when we make decisions. Lehrer does a great job of communicating science’s most recent studies on decision making and the brain….and get this, he does it in layman’s terms and makes it interesting. I could not put the book down and at 265 pages, it’s a fast paced and cram packed read.

The book is reminiscent of Quirkology by Richard Wiseman. Like Quirkology, it is full of odd and interesting science experiments, such as – Why is an experiment with 4 year old child and a single marshmallow, the most accurate indicator of what that child’s IQ will be when they are 18? Except where Quirkology is mostly a collection of various odd scientific studies , Lehrer pinpoints studies done on how the brain makes decisions.

I like reading atheist literature, like Richard Dawkins and Sam Harris. The basis of their arguments are set in the concrete foundation of logic and reason. Indeed, the USA and its Constitution, and legal system were borne from the Age of Enlightenment. Common thought is that if we only apply logic and reason to all known facts involved in a particular decision, we will always make the best choice.  Just the Facts as Joe Friday would say. But what about hunches and gut feelings. Where does that hunch or feeling come from?

Lehrer goes on to show that when we over think, we make mistakes; when we do not think at all, we make mistakes; and most importantly  – when we are the most certain, we are also most likely to be wrong. The Chapter on Moral Decisions was eye-opening.

But all is not lost. Lehrer takes the information gathered by science, and shines the light  on how to improve our decision making process. Such as spend time thinking about how you think. If you think something is right, spend time trying to think how you could be wrong. If you are a conservative, read some liberal literature. If you are liberal, listen to right-wing talk radio. Creating a dialogue in your mind will make you wiser. He suggested we actively eavesdrop on our internal dialogue.

So far, this is the best book I have read this year. Friends of mine also highly suggest “Predictable Irrational” by Dan Ariely, which is along the same lines, but aims at the fundamental flaw in economic theory, that individuals always act rationally.

“How We Decide”  by Jonah Lehrer is available at the Clarksville-Montgomery County Public Library on the second floor (153.83 Leh.)

Blayne Clements
I am a 30 something graduate from Austin Peay State University, where I graduated in 1997 with two majors (Accounting and Finance). I am a very happily married man, with one beautiful daughter. I enjoy a professional life of public service and a personal life of travel, reading, music, and always trying to learn from others.
RELATED ARTICLES
Arts/Leisure