In 1997 the Tennessee branch of the AFL-CIO made an agreement with the Corrections Corporation of America (CCA) to support the privatization of Tennessee’s state prison system. This opened the door for Tennessee’s prison labor being used to compete with private industry.  Currently the highest-paying prisoner in Tennessee earns 50 cents an hour to produce jeans for K Mart and JC Penney, among other things.

Of all the states, Tennessee unions should have been the last ones to support prison labor. The reason lies more than a century in the past, in the days following the end of slavery.

With the end of the Civil War, employers all over the south were confronted by the reality of the end of free labor. They appealed to their state representatives for help and their representatives responded by finding a pool of free labor previously untapped – prisoners. It was called Convict Leasing. The prisoners would work for companies during the day outside of prison, and then return to their cells at night. Neglect, brutality, and abuse of the prisoners were rampant, as was official corruption. The conditions were so harsh that prisoners rarely survived longer than 10 years, but everyone was making money from it (except for the prisoners, of course) so the system remained.

In fact the system was so successful that there was a need for more labor. In many states simple assault carried sentences of seven and eight years of hard labor. Larceny could get you twenty years in prison. Stealing five dollars worth of goods could net you twelve months. Even the theft of a rail fence could put you in prison stripes.

Of course, this reality wasn’t true for everyone (read: white people). If it was then there would be a political backlash. Instead these inhumane laws fell disproportionately on the recently freed black community.

At Tennessee’s main prison in Nashville, African-Americans represented 33 percent of the prisoners in October of 1865. In 1866 Tennessee passed it’s convict leasing law. By 1869, 64% of the prison was African-American, and it kept climbing in the following years. The benefits of this new slavery fell on a select few – the rich. Poor whites workers found themselves at a disadvantage in this system when their interests conflicted with the upper-class.

In January 1871, free white miners in Tracy City struck for higher wages against the Tennessee Coal and Iron Company (TCI). TCI brought in convict labor as strikebreakers. The strike ultimately failed and was broken. 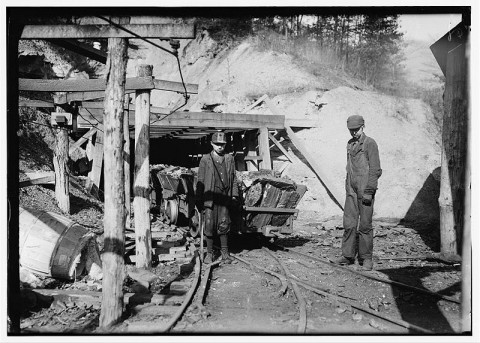 By 1889, TCI was contracting, or sub-contracting out 60 percent of all of Tennessee’s prison population for over $100,000 a year. Strikebreaking of this sort would pop up several more times in the following twenty years. Whenever the miners tried to organize for better wages and working conditions, the companies would use the threat of convict labor. In the words of TCI company vice-president A. S. Colyar, “an effective club to hold over the heads of free laborers.”

“Kill a man, get another; kill a mule, buy another.”
– a familiar phrase in the mines the convicts worked

In 1866, right around the end of the War between the States, coal began to be mined in an area of Anderson County known as Coal Creek. By 1870 this sparsely populated area contained 10 businesses, three of them saloons.

In 1890 John P. Buchanan become governor of Tennessee with the Farmers’ Alliance and Laborers’ Union party.

This labor-friendly political environment emboldened the miners of Coal Creek Valley to make two demands. One demand was the end of company script. The miners wanted to be paid in cash rather than being forced to pay for overpriced goods at the company store. The other demand was to be able to elect their own checkweighmen – the specialist who weighed the coal the miner produced, and thus determined the miner’s wages – rather than the checkweighmen the company hires.

Since state law already barred scrip payment and company-hired checkweighmen, most of the coal companies agreed to these demands. However, the Tennessee Coal Mining Company (TCMC) rejected the demands, and on April 1, 1891, they shut down their mine near Briceville. Two months later they demanded the miners agree to a yellow-dog contract before working in the mine. The miners refused.

On July 5, TCMC reopened the mine with convict labor. The company had torn down several houses in order to build the stockade for the prisoners. On Bastille Day, 300 armed miners surrounded the Briceville stockade. After the guards surrendered without a fight, the 40 convicts and the guards were marched to Coal Creek where they were loaded onto a train and sent to Knoxville. The miners then sent a telegram to Governor Buchanan, stating their actions were taken to defend their property and wages, and asked for his intervention. The Governor responded by accompanying three state militia companies, and the prisoners, back to Briceville.

At Thistle Switch several hundred angry miners confronted the governor. He assured them he was a champion of labor, but as governor he was obligated to enforce state contracts. He didn’t mention the state laws concerning cash wages and checkweighmen. The governor left 107 militiamen to guard the stockade and fled the area.

On the morning of July 20, 2,000 armed miners again surrounded the Briceville stockade. Their numbers had been bolstered by union miners from surrounding regions, including Kentucky, which had removed their own convicts from mines several years earlier.

The following day the governor met with a committee of local leaders friendly to the miners, especially United Mine Workers organizer William Webb. He convinced them to agree to a 60-day truce while he called for a special session of the legislature where he recommended the convict leasing law be repealed. The miners agreed.  Much to the chagrin of the miners, the only action the legislature took was to make it a felony to interfere with the leasing system. A court challenge of the system was also defeated in October.  On October 28, 1891, the committee representing the miners resigned and denounced the legislature. The path to violence was now open.

On October 31, a large group of armed miners surrounded, and then burned down the convict stockade at Briceville. The prisoners were supplied with food and civilian clothing and then turned loose into the surrounding woods after being urged not to commit any more crimes. The Knoxville Iron Company stockade was also seized that day, and several company buildings were destroyed in the process. All told 300 prisoners were released by the miners. On November 2, another prison stockade at the Cumberland mine in Oliver Springs was burned and another 153 prisoners were released. Another truce was negotiated which allowed the return of the convicts to Coal Creek and Oliver Springs, but not to Briceville (TCMC president B.A. Jenkins had grown disenchanted with convict labor).

The state dispatched an 84 man militia detatchment under the command of J. Keller Anderson. Anderson constructed Fort Anderson, equip with a gatling gun, atop “Militia Hill” to guard the stockade at Coal Creek. The convicts returned on January 31, 1892.

In the following months miners and soldiers at Coal Creek shot at each other indiscriminately. Both sides blamed the other.

The use of convict labor, and the violence associated with it, had given the practice a bad name. Most coal companies were moving away from convict labor, with one major exception – TCI.  When Cumberland Coal decided against using convict labor at the Oliver Springs mine, TCI purchased the mine lease. TCI then began minimizing the use of free labor.

On August 13, 1892, free miners tore down the stockade at Tracy City and freed hundreds of convicts. On August 15, convicts from the TCI stockade at Innman were also freed.  On August 17, a group of miners attacked the TCI stockade at Oliver Springs, but were beaten back by the guards. However, the miners regouped and enlarged their numbers. The guards then surrendered. The stockade was burnt down and the convicts and guards were put on a train to Nashville.

The following day in Coal Creek, militia commander Anderson was captured by the striking miners. The miners then sent a demand to Fort Anderson’s second-in-command, Lieutenant Perry Fyffe, to surrender. When Fyffe refused the miners charged the fort and a fierce firefight ensued. The miners failed to capture the fort, but two militiamen were killed by snipers.

Governor Buchanan declared martial law in the Coal Creek region. He dispatched 583 militiamen under the command of General Samuel T. Carnes. He also ordered sheriffs in effected counties to organize posse.  Most of the sheriffs ignored the command, however volunteers in Knoxville organized themselves and marched on Coal Creek to relieve Fort Anderson. As the volunteers descended Walden Ridge they were ambushed by a group of miners and two of the volunteers were killed. The rest fled back to where they came.

Carnes arrived on August 19 and quickly restored order. He negotiated the release of Anderson, and then conducted a sweep of the entire Coal Creek region.  Carnes arrested hundreds of miners, which in effect ended the Coal Creek War.

Some 300 miners were put on trial, but the jurors only convicted two – D.B. Monroe and S.A. Moore, for conspiracy. Neither of which served more than a year in prison. Most of the violence associated with convict labor was spent, although there was a failed attack on a stockade in Tracy City in 1893. Buchanan was attacked by both miners and mine owners for indecisiveness. He failed to win his party’s nomination for governor in 1892. The legislature proved more willing to address the subject of convict leasing in their 1893 session. They agreed to construct a new state penitentiary and abolish convict leasing at the expiration of the lease contract in 1896.

Garrett Johnson is a free-lance writer who’s been published in the San Francisco Independent. He is a political activist, economics enthusiast, history buff, and a frequent contributor to such blogs such as the Daily Kos and Economic Populist. In his spare time he is an IT Specialist, beer drinker, pool player, backpacker, and all-around geek. This article is republished here with the generous permission of the author.