When you think about Paris, you can’t help but to think of the arts. In addition to the wonderful paintings from that period, Paris was also the center of what amounts to a perfect storm in music. The rise of Jazz in America had reached Paris with the influx of Americans musicians, after the end of the first World War. That was what was showcased during the Dimension’s New Music Series a free concert hosted by the Austin Peay Center of Excellence for the Creative Arts. The evenings program delved into the wonderful music that came out of the city of Paris Between the Wars: 1918-1939.

The first set featured Maurice Ravel’s Noble and Sentimental Waltzes, which were a look back at a France that could no longer exist after that city passed through the maelstrom of the first world war.

Patricia Halbeck takes her seat and The piano starts to play a series of almost harsh and somewhat discordant notes with an upbeat refrain hinting at that innocence that was lost never to be found again.

She was followed by Stanley Yates who played a selection from Brazilian composer Heitor Villa-Lobos, his Twelve Études for Guitar which was written in 1928. In his playing You could hear the intertwining of European and Latin sounds and rhythms.

“To some degree, his guitar works also pay homage to Chopin, whose piano etudes were clearly the model for Villa-Lobos’s Estudos for Guitar. These are true concert Études for the guitar and, like the Chopin works, are meant for the stage; they are not limited to the status of mere pedagogical tools. Villa-Lobos’s Estudos also represent an attempt, consciously or subconsciously, to legitimatize the guitar as a concert instrument and raise it to the level of the piano…” 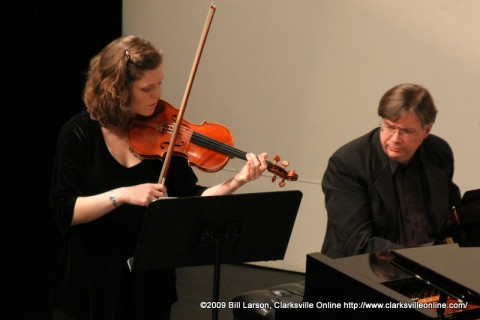 A duet by Emily Hanna Crane on the Violin, and Jeffery Wood on the Piano followed. They returned to Maurice Revel’s works and performed his Sonata for Violin and Piano.

“The Sonata for Violin and Piano was a rather late composition in Ravel’s life. The work progressed slowly as a result of ill health and took four years (1923-1927) to complete.”

Emily Crane has a magnificent ability to pluck emotion with the same ease as she could pluck her strings. Jeffery Wood’s ability on the piano meshed nicely resulting in a seamless flow to the melody.

For the next set Jeffery Wood remained on the piano, where he was joined by Lisa Vanarsdel playing flute. Together they gave the audience a peek at Albert Roussel’s Flute Players, Op. 27. While playing together their instruments almost leaped through the musical notes, cavorting together with a pure joy.

The final set featured the complete Gateway Chamber Ensemble, which is based around Austin Peay State University’s outstanding faculty, and includes many of the area’s leading professional musicians. They will be featured in the Community Concert Series  on Feburary 22nd, and I am looking forward to seeing them there! The 13 member group is conducted by Gregory Wolynec.

He had this to say about last night’s program:

“Essentially what we had, was this hotbed of activity going that on in Paris between the wars, especially in the 20’s. We had this combination of Europeans; French but also Germans, Swiss, & Americans; from all disciplines whether it’s music, visual arts, or dance, sorta intermingling and creating just a really amazing numbers of possibilities. So we heard a little bit of Jazz, which was sorta the new thing coming from the US. Which was great,  because it’s the only truly American musical form. We combine that with people like Ravel, who were just getting back to the careers they had (before the war). That makes this just a really exciting program.”

Last night they enabled the audience to experience the Creation of the World, op 8ia (1922-23) by Darius Milhaud. The melody is as Chaotic and jumbled as the creation of the world really must have been, if only we had been there to witness it. Slowly the Gateway Chamber Ensemble managed to pull order from the chaos, and through them the true beauty of Milhaud’s magnificent creation shone through. 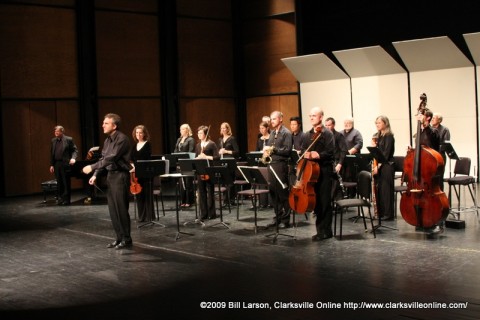 [7]The next concert scheduled at the Center for Excellence for the Creative Arts is part of the Community Concert Series on October 8th. Featuring the exceptional Gabriela Montero, whose visionary interpretations and unique improvisational gifts have won her a quickly expanding audience and a devoted following around the world. Born in Caracas Venezuela, Gabriela gave her first public performance at the age of five. She performed at the inauguration for President Obama. In both recital and after performing a concerto, Gabriela often invites her audience to participate in asking for a melody for improvisations. They ask for themes from a Mozart Symphony to Star Wars. Gabriela says, “Because improvisation is such a huge part of who I am, it is the most natural and spontaneous way I can express myself. I have been improvising since my hands first touched the keyboard, but for many years I kept this aspect of my playing secret.”