HomeNewsTDOS & TWRA Urge Motorist to Be on the Lookout for Deer...
News

TDOS & TWRA Urge Motorist to Be on the Lookout for Deer

NASHVILLE – The Tennessee Department of Safety (TDOS) and the Tennessee Wildlife Resources Agency (TWRA) caution motorists to watch out for deer, especially during the months of October through December, which is deer mating season, also referred to as “the rut”.  Deer are on the move during this period, meaning an increase in deer-related crashes is more likely.

“Every year hundreds of Tennessee motorists are involved in property damage crashes and some suffer injuries after striking a deer.  Deer pose a danger to drivers throughout the year, but especially in the fall,” stated THP Colonel Mike Walker.  “In areas were deer are populated, it is important that drivers always slow down, pay attention and stay alert.” 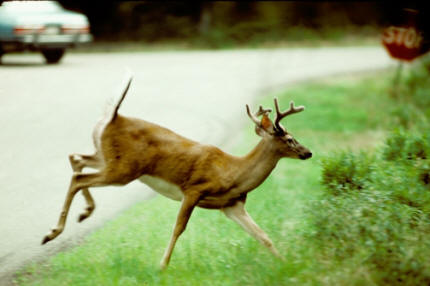 Between 2004 and 2008, less than ten percent of deer-related crashes occurred on interstate highways, so motorists should exercise extra caution when not traveling on a major thoroughfare.  November, when deer hunting season starts, is the worst month for deer-related crashes.

“November is when the peak of the rut occurs, and is the worst month for deer-related crashes,” said TWRA Information Officer Don King. “It is also prime month for deer hunting season, which is the only effective way to reduce the number of deer and help keep the population number in check.”

The THP and Tennessee Wildlife Resources Agency have these tips for drivers to help prevent deer-related crashes during peak mating and hunting seasons:

Statistics for deer-related crashes in Tennessee

Additional data regarding deer-related crashes can be found at http://www.state.tn.us/safety/stats/CrashData/Animal.pdf.

The Tennessee Department of Safety’s mission is (www.TN.Gov/safety) to ensure the safety and general welfare of the public. The department encompasses the Tennessee Highway Patrol, Office of Homeland Security and Driver License Services. General areas of responsibility include law enforcement, safety education, motorist services and terrorism prevention.